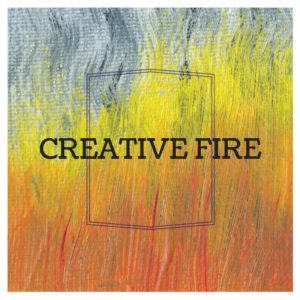 I write a lot about creative permission because permission is a big deal. As kids we have to obtain permission to do things. As adults, the permission must come from inside of us.

Once upon a time, about a hundred years ago, I heard a woman tell a story in a counseling group. It moved me deeply, and I’ve never forgotten it because it feels elemental to the notion of creativity and giving oneself permission to be creative. Let’s call the woman Eleanor (after one of my favorite, very inhibited characters from Shirley Jackson’s The Haunting of Hill House).

Eleanor had a much younger brother named Joshua. Like many oldest children, Eleanor was a rule-follower, cautious about interacting with the world because she wanted to do everything just right. Joshua, she said, was a free spirit and into everything. She loved him, but she didn’t understand why he seemed to be allowed to get away with doing things that she wasn’t allowed to do. One thing that truly tormented her was Joshua’s habit of building pretend “fires” that he set up around the house. The “fires” were heaps of toys and shoes and pillows that he gathered into great, unwieldy piles. I imagine what it must have been like, gathering all those things, pretending that they were a giant blaze, right in the middle of the living room. It kind of sounds like a lot of fun to me. Kind of is an important qualification here. While I am no neatnik, the idea of making a mess on purpose stresses me out.

Because Eleanor was older, she was required to help Joshua put out his fires. Read: clean up the mess. From a parenting perspective, this is problematic. While it’s a great idea to let kids have free reign with their creativity, it’s not fair (maybe not quite the word I’m looking for) to make your other kids pay for it. Eleanor was not invited in on the fun of building the fires. Ever. They were her brother’s privilege, and she felt like–indeed she was–the clean up crew. As the adult Eleanor talked about the fires, her anger, frustration, and sadness were in her voice and written on her face. Inside, her little kid was obviously heartbroken.

The leader of the session suggested that Eleanor build a fire in the middle of our meeting room. She was reluctant, but we cheered her on and contributed our shoes, neckties, purses, notebooks, coats…anything we had on hand. It was fun and silly and interesting to watch another adult playing that way. Her tears disappeared as she built the fire. They were back after it was all over, but they were happy tears.

Those of us who often feel inhibited creatively can come up with a million reasons why we feel that way. I’m a big fan of psychological therapy because it helps answer the why questions. It feeds the part of my brain that wants answers and loves to build a narrative. But what happens after you recognize the whys? Recognizing them doesn’t make them go away. We’re still Eleanor, angry at ourselves and often others because we can’t seem to give ourselves permission to build fires, write books, paint pictures, dance…dream.

Eleanor received permission from the counselor to make a mess. But she didn’t have to do what he said. She made the choice to gather up our things and put them in a pile in the middle of the room. How easy it would be if we all had a counselor, a therapist, a BFF, a coach, a PARENT there every moment to tell us it was okay to go ahead and DO THE SCARYFUNWILDINTERESTINGCHALLENGINGPROFITABLERISKY THING. But, no. It’s not healthy for adults to have someone tell them what to do every moment. It has to come from inside us.

Where’s the self-trust to do risky, creative things if it didn’t come boxed with our Adult Operating System? That’s a toughie. Sometimes you just have to fake it until you make it.

Sometimes we have to play a role. Fool ourselves. Pretend that we don’t think that what we’re going to do will be an utter and absolute failure and that someone is going to yell at us if we leave a big, flaming, awesome MESS right out there where everyone can see it. That we don’t care if someone else has to help clean it up. (Writer Protip: professional editors!)

We have to be Joshua. Joshua unleashed. Joshua at play.

I don’t know about you, but I’ve spent an awful lot of time being Eleanor. Afraid. Worried. Even angry. As much as I write, I’ve never quite been able to be Joshua. Joshua never holds back. Joshua has a great time, and his only concern is the height of his fire. I’ve held back, even when I thought I was being my most creative and pushing at the limits. They were limits, yes, but they were limits set by the Eleanor inside me. Safety limits. Comfort limits.

Here’s the thing: If you’re Eleanor, and you decide one day you’re going to take a chance and let your inner Joshua out to play, don’t worry that you’ll go too far. Eleanor will still be there, watching, setting limits, not letting you run out into traffic (even if sometimes she secretly wants to throw you into it). You have nothing to lose. I promise.

As writers, we need to play, play, play. That’s what we’re here for–to entertain. To have fun so our readers can have fun with it too.

Are you Joshua? Are you Eleanor? Both? Do you have to reign yourself in, or give yourself a big kick in the permission pants to get those words on the page?

Happening now over at Goodreads: To get ready for the October 11 release of my latest gothic suspense novel, The Abandoned Heart: A Bliss House Novel, enter to win all three standalone books in the Bliss House series. 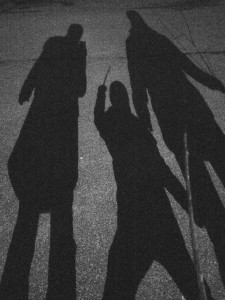 I was at a conference a couple of weeks ago and a new writer came up to me, said she had a great concept and had used one of my books to outline the plot. She was now 30k words into the novel and scared. She said it felt like she was looking out at sea from a tiny raft. There was this looonnng way to go in Act II, but now she wasn’t sure she had enough plot material to make it.

“Ah,” I said like a liposuction surgeon, “the sagging middle. No worries. I’m here to help!”

We sat and talked a bit about signpost scenes and she understood all that. But it was clear she needed more “story stuff” in her plans.

So I suggested she write the shadow story. This is the part of the novel many writers never think about, yet it’s one of the most powerful plotting techniques there is. It will take you places you’d never find if you only danced around in the light.

Simply put, the shadow story is what is taking place away from the scene you are writing. It’s what the other characters are doing “off screen.” By giving thought to the shadows, even minimally, you greatly expand your store of plot material.

Start With The Antagonist

The most important shadow is the opposition character. Someone once said a good plot is two dogs and one bone. So while your Lead is gnawing the bone in one scene, your antagonist (off screen) is laying plans to snatch that bone away. Or setting in motion a scheme to kill the lead dog. Or messing with the dogs who are helping the lead dog.

Whatever it is, by getting into the head of the opposition character, who is somewhere else, you will come up with all sorts of ideas for plot complications. It’s almost automatic. Fresh scenes, mysteries, obstacles will spring up from your writer’s mind. Your Act II problems will begin to melt away.

You also have a cast of supporting characters, major and minor, who all have lives and plans and motives of their own. Here you will find the fodder for those plot twists every reader loves. Like when a seeming ally turns out to be a betrayer. Or an enemy becomes a friend. Why would that happen? Let their shadow stories tell you.

Shadows Inside the Lead

You can also delve into the shadows and secrets of your Lead. Maybe you’ve done this already, by giving your Lead a backstory and answering key questions about her life (education, hopes, fears, lost loves, etc.)

But every now and then, in the middle of the writing, pause to come up with something going on inside the Lead that she is not even aware of. Try what I call “the opposite exercise”: The Lead, in a scene, has a specific want or need (if she doesn’t, you need to get her one fast, or cut that scene!) Now, pause and ask: what if your Lead wanted something the exact opposite of this want or need? What would that be? List some possibilities. Choose one of those. Ask: Why would she want that? How could it mess with her head?

Then look for ways to manifest this inner shadow in some of your scenes.

Or imagine your Lead doing something that is the opposite of what the reader or, more importantly, you would expect in that scene. What sort of shadow (secret) made her do that?

Just by asking these sorts of questions, you deepen your Lead and add interesting crosscurrents to the plot.

That’s the power of the shadow story.

There are two excellent ways to keep track of your shadow story material.

First, Scrivener. I know some people are intimidated by all the bells and whistles of this program. My advice is to use it for a few simple things (mapping your scenes on the corkboard; keeping track of your cast of characters) and then learn other stuff at your own pace, and only if you want to. At such a reasonable price, Scrivener is cost effective for whatever you use it for.

Here is a screen shot of a scene being written (click to enlarge). The page with the text is just like a Word document. Scrivener lets you dedicate a document to one scene or chapter. 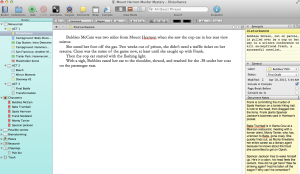 Notice on the bottom right there’s a box labeled “Document Notes.” This is place where you can jot down anything relating to the scene on the left. Perfect for shadow story. You can be as brief or as detailed as you like.

The other method is to use the Comments function in Word. Just insert a comment which gives the shadow material:

Remember, all sorts of good stuff happens in the shadows. Go there, snoop around, then come back to the light and finish your novel.