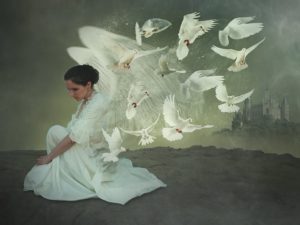 Being a writer can be traumatizing.

Back in October I finished writing Silent Mayhem, a book that deeply affected me.

Sure, I was passionate about the story — I wouldn’t have written it otherwise — but it morphed into more than that; it slashed open another part of me.

I’m still not sure if I’m feeling my own emotions or my character’s, the line between reality and fiction blurred beyond a rational explanation.

While writing, I became the vessel and something else inside me wrote the story, my soul taking it places I hadn’t foreseen in the planning stage. This sounds like a good thing on the surface, but something occurs in the story that wounded me on such a deep personal level. Was it the best thing for the Mayhem Series? Absolutely. This series of events became the catalyst for the next book. And yet, I was still grappling with how to move past it.

The holidays rolled around, and I reverted back into my happy-go-lucky self again. During that time, I started writing Book 4 of my Grafton County Series, but even this new storyline pierced several layers of my heart, illuminating the fact that I may never escape emotional turmoil.

Fast-forward to the beginning of February. My publisher and I worked with the cover designer for Silent Mayhem. On the day the final cover popped into my inbox, my editor sent back the first round of edits.

No big deal, I told myself. I’m a professional. I’ll just leapfrog into the story, bang out the edits, and then plunge back into my WIP. Easy peasy, right?

I read the story one last time from start to finish, making my corrections along the way. Well, I soon found myself in the same quandary, the storyline almost crippling me emotionally.

Friday night I finished my edits and had planned to reopen my WIP on Saturday morning, but as I sat at my desk, I wasn’t able to let go of Silent Mayhem, the storyline tearing open scars I didn’t even know existed. No matter how hard I tried, I couldn’t shake off the emotional upheaval. This isn’t the first time it’s happened, either. Unlike before, though, I don’t have the luxury of processing my feelings ad nauseam, or even take a well-earned break. Grafton County, Book 4, is due in March.

So, what do you do? Exercise, read, watch a movie … anything to take your mind off the story, right? But what if you still can’t flip the emotional switch to off?

I turned to our ol’ friend Google for the answer. Surely other writers have experienced the same thing. One brave soul must have written about it, right? Surprisingly, I couldn’t find one post. Not one! I read about specific emotions that may lie at the heart of my unrest … grief, betrayal, uncertainty, vengeance, etc. etc. But nowhere could I find advice on this topic as a whole.

What would you even call it, Wounded Writer Syndrome?

Psychology Today has a fantastic article about trauma and how writing about it can help heal us. Writer’s Digest also advocates using a traumatic experience to fuel our writing. Harvard Medical School uses the term “expressive writing” when writing becomes cathartic after a difficult life event. But what if writing caused the trauma?

After a lot of soul-searching, I came up with my own way of coping.

The first step is the hardest of all. It requires us to delve deep within our psyche and unearth the root cause. At what point in the story did our emotions entangle with the character’s? Where did we lose control? Is there a certain scene or chapter that arouses a physical reaction, like crying, shaking, or squirming in the chair? If we’re able to pinpoint the exact moment that first had a profound effect on us, the healing process can begin.

They conducted a study in Kansas, where women with breast cancer experienced fewer symptoms and went to fewer cancer-related appointments in the months following expressive writing. The aim of the study wasn’t to combat the disease, and the authors of the paper don’t claim the actual cancer cells were affected. However, the study shows other aspects of the women’s health improved faster than the control group, who merely stated facts rather than expressing the emotional impact of the disease.

What does the act of committing words to paper do? Initially it was assumed this simply happened through catharsis, that people felt better because they’d let out their pent-up feelings. But then Pennebaker began looking in detail at the language people used in their writing.

He found that the types of words people used changed over the course of the four sessions. Those whose wounds healed the fastest began by using the word “I” a lot, but in later sessions moved on to saying “he” or “she” more often, suggesting they were looking at the event from other perspectives. They also used words like “because”, implying they were making sense of the events and putting them into a narrative. So Pennebaker believes that the simple act of labelling your feelings and putting them into a story is somehow affecting the immune system.

I propose the same holds true for those of us afflicted by Wounded Writer Syndrome. Find the exact moment in your story and write about how that scene, or scenes, affected you, the writer. At that point, we can then piece together our shattered spirit … just in time to traumatize ourselves all over again with the next book. 🙂

Have you experienced Wounded Writer Syndrome? What are some ways that helped you heal?