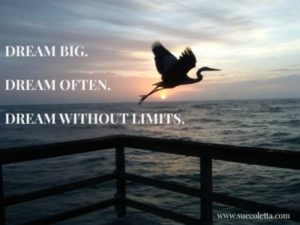 Most of us are able to recall one or two of our dreams, but what if there were ways to increase that number?

Nightmares aren’t fun. Night terrors are even worse. It’s important we pay attention, though, because they can signal a disruption in our lives and sometimes, provide the answer.

Sigmund Freud believed dreams were a window into our subconscious, that they paved the way to satisfy urges and secret desires that might be unacceptable to society. I agree with the first part of his theory, but I think the latter depends on the dreamer. When it comes to dream interpretation there’s no cookie-cutter, one-size-fits-all definition.

Case in point: crime writers dream about murder. If an average Joe plotted revenge in his dreams, it might be cause for alarm. When writers delve into the dark recesses of the subconscious mind, it’s research. 🙂

While some sleep experts believe dreams are an anomaly of sleep, others think they may help us save memories, problem-solve, and manage emotions.

Dreams and the Brain

During REM — rapid-eye movement, when brain activity piques — and non-REM sleep, we have the potential to dream.

Dreams are connected to the creativity part of the brain, called the Superior temporal gyrus

We have three creativity sections of the temporal lobe…

This could explain why serial killers, who often have temporal lobe damage or malformations, experience different phases before, during, and after they kill. And why, during the Aura Phase colors become vibrant.

Did you notice in the 3D image the temporal gyri aren’t limited to the right-side? Brain cells in the left hemisphere have short dendroids which pull in information.

The right hemisphere branches out wider to absorb distant unrelated ideas, connections between concepts, and is responsible for insight and Ah-ha! moments. It’s here where our creativity comes alive.

Part of the Brain Responsible for Dreaming

The cerebral cortex is responsible for our dreams. During REM sleep, signals are sent from an area of the brain called “the pons” and then relayed through the thalamus to the cerebral cortex, which attempts to make sense of these signals. The end result is dreaming.

The pons also send signals to neurons in the spinal cord, shutting them down, causing temporary paralysis of the limbs. This safety switch prevents the dreamer from physically acting out dreams and harming themselves. However, there are exceptions. A condition called REM sleep behavior disorder exists. Can you guess what this causes? If you said, the pons fail to paralyze the limbs during REM sleep, you’re correct.

Why Dreams Are Difficult to Recall

Some researchers believe we’re not designed to remember our dreams. If we had perfect recall, dreams might get confused with real-life memories. During REM, maybe our brain shuts off the Inferior temporal gyrus, responsible for memory recall. And why, we may only recall our last dream before waking, because that part of the brain is now switched back on.

Studies show people actually have more brain activity and more vivid dreams during REM. Others say our brains store dreams, which is why the tiniest detail later in the day can trigger the memory of what we’d dreamed the night before.

Sound sleepers are less likely to recall dreams. If you fall into this category, consider yourself lucky; the rest of us don’t sleep as well. Even so, maybe these tips will help:

So, my beloved TKZ family, are you able to recall dreams? Have you ever used dreams in your writing?

23 thoughts on “Writers and Dreaming”