Spring break is nearly upon us so forgive my rather brief blog post (we are preparing to take my 9 year old twin up for a spot of skiing in the beautiful mountains near us – so things are a little crazy).  Luckily, both my boys are great readers (so we get to take lots of books with us!) and I love how we can now discuss books we’ve all read and how I can give them recommendations now that don’t (usually) provoke a whole lot of eye-rolling.  I also still read to them every night and have recently started introducing them to Conan Doyle’s Sherlock Holmes stories.

A few pages into the Hound of the Baskervilles, however, and my boys were already terrified (not a good idea just before bed!) so we started instead with A Study in Scarlet and have just recently moved on to The Sign of Four. What is amazing to me is how, despite the old-fashioned language and pace, both my boys are already totally hooked – and I think it’s not really the mystery that draws them in but the character of Holmes himself. It really is amazing to think that a character which in many ways is such a product of his times can be still so intriguing over a hundred years later. As a mum of course, I do have to explain his drug use and the smoking…but, hey, I think of these as…er…’teachable’ moments!

I came to Sherlock Holmes quite late  (I was well into my twenties before I read my first Holmes’ story) – compared to my husband who devoured all the stories when he was in the 5th and 6th grade at school in Australia. Though I enjoyed the stories, I don’t think I appreciated the mesmerising qualities of Sherlock Holmes as a character until I started reading the stories aloud to my boys. I’ve been interrogated by them on every aspect of his character – from whether he was based on a real person, to why he knows so much, to how, on earth, he can make such amazing deductions…He’s like a super-hero in many ways but also an enigmatic and  flawed hero – which is what, I suspect, makes him so intriguing.

I’m looking forward to continuing to read these stories to my boys and then, I hope, handing the books over to them to read for themselves. To me, one of the great pleasures of being a parent, is passing on a love of reading. I already see each of my twins developing their own reading preferences and am glad that, at least in so far as Sherlock Holmes is concerned, they are gaining an appreciation for mysteries:)

So – tell me, are you are Sherlock Holmes fan? Do you have a particular favourite story? What do you think makes both him (as a character) and Conan Doyle’s stories endure? 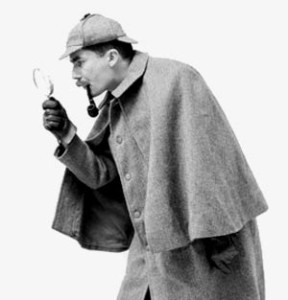 And what about that great heroine of the Civil War South, Pansy O’Hara? Remember her?

Of course you don’t. Because Margaret Mitchell thankfully scotched it after briefly considering it for her lead in Gone With the Wind. Props also to Sir Arthur Conan Doyle for choosing Sherlock Holmes and Dr. John Watson, after toying with those other names.

Travis McGee, the popular creation of John D. MacDonald, has a sound like the character himself–living on a houseboat, few cares in the world, hard when he needs to be.

Could any gumshoe be tougher than Sam Spade?

And so it goes, with other names like: Winter Massey, Kate Gallagher, Cotten Stone, Ursula Marlow, Jonathan Grave and Kelly Jones.

Good, solid monikers all. I wonder what the naming process was for the creators of these characters? Perhaps they’ll share it with us.

Here is what went into naming my own series character, Ty Buchanan, whose latest appearance is in Try Fear.

Tyler is from Fight Club. Tyler Durden (played by Brad Pitt in the film) is primal, nihilistic, violent. In Try Dying, the first book in my series, Ty Buchanan has to contend with similar feelings as his world is turned upside down. An up-and-coming lawyer in LA, Ty has it all. But his fiancée is killed (on page 1) and when he goes looking for answers, he’s forced into a street existence that both engenders and requires a hard-edged response.

Buchanan is from a favorite Western of mine, Buchanan Rides Alone (1958, dir. Budd Boetticher), starring the iconic Randolph Scott. He is, in the best western tradition, an anti-hero and loner, but with a strong inner code of honor. He doesn’t look for trouble, but when it finds him, he fights. And he always displays an insouciant good humor.

I wanted these two dynamics to play out within Ty Buchanan. They provide counterpoint and inner conflict, as the Buchanan side is often at odds with the Durden aspect. Thus, the name.

So, writer, how did you choose names for your Lead characters? Is it more than a sound for you? Is there a deeper meaning you look for? Or do you just run your finger down the white pages of a phone book?

And you, reader, what names come to your mind when you think of memorable literary heroes?