Last week I explained why my next book will bear a pseudonym. It’s really about brand distinction. Man, is it about brand distinction! Here’s why:
About a year and a half ago my agent, Donald Maass, and I are discussing ideas, and I say, “The whole zombie thing is hot now, but it’s all the same, zombies as slobbering, mindless monsters. What if the zombie was the hero? In fact, what if it was a lawyer practicing law in L.A.?”
Don laughed. I went with it. “I mean, how can you tell the difference between zombies and defense attorneys anyway? Most people think there IS no difference. And what if this lawyer specialized in defending outcasts like vampires, who never get a break?”
Don told me to write up a proposal. As with all my ideas for fiction, I had to see if I could get into the characters and the heart of the story. I can’t just write to a market. I know some can. But even with short stories, I have to connect to the material in some essential and emotional way.
So I started doing my pre-writing. I knew I wanted to write in the hard boiled tradition I love. I wanted it to be an actual legal thriller, where I would use my experiences in court (with a paranormal twist. Let me tell you, I’ve been in front of a few judges who I thought came from other planets). I wanted a first person narrator, and then I decided I wanted it to be a woman with a strong voice and attitude and wit.
All that started to emerge. Finally, I came up this concept:
TAGLINE:
In L.A., practicing law can be hell. Especially if you’re dead.
PITCH:
In an increasingly hellacious L.A., zombie lawyer Mallory Caine defends a vampire hooker accused of the crime Mallory herself committed, even as a zombie-killer closes in and the love of her former life comes back as the Deputy DA she must oppose. And as Lucifer himself begins setting up L.A. as his headquarters for a new attack on heaven and earth, Mallory slowly discovers she may be the one who has to stop him.
Well, doggone if Don didn’t go out and sell it to Kensington, in a deal that was everything I hoped it would be. I wanted the books to come out in mass market, with great cover art and the know-how of a terrific company behind it. I also wanted it priced right for you, the reader, both print and e-book.
It is all these things.
And as far as I know, this is the first zombie legal thriller series on the market. It’s not everyday you get to start a genre. Which, to my mind, makes it imperative that you jump on the bandwagon while it’s hot!
And so here it is, the first in the Mallory Caine, Zombie-at-Law series, PAY ME IN FLESH by the mysterious yet roguishly handsome K. Bennett. 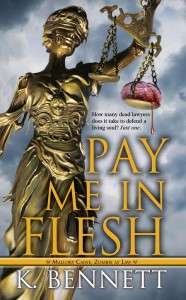 Find it at your local bookstore or online. Official pub date is on Tuesday . . . just in time to deal with the debt ceiling blues!
You can also check with:
Indiebound.
Amazon.
Barnes & Noble.
K. Bennett has a dedicated website that will post things from time to time. But right now, it’s all about the launch.
So there is really nothing left to say but Bon Appetit!