It’s been months since I shared the saga of the injured raven vs. my beloved “pet” crows, but there’s a good reason for that. I didn’t have an ending till last Thursday. For a while I thought I did, but I needed to verify my suspicions. Ignore the colors as you read. I’ll show you cool writing trick at the end. 🙂 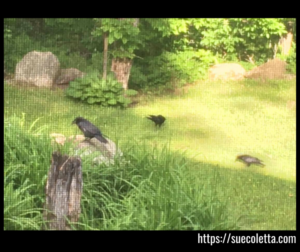 When the story left off, I was trying to figure out how to feed “Rave” without angering my beloved Poe and her murder. While I weighed my options, the crows scolded the raven from all directions.

I have a strict “no fighting” policy in my yard. When anyone breaks this rule, I reinforce my disappointment by withholding food till they smarten up. A wise crow doesn’t anger the human who controls a never-ending supply of tantalizing treats. Needless to say, the attacks stopped as long as Rave stayed within the property lines. If she crossed the dirt road to the woods, my rules were no longer in play, and they divebombed her.

Two weeks later, Poe signaled for me to use her summer rock. I’d created two separate feeding areas so Dad (my husband) didn’t have to shovel the lower yard — affectionally named Animal Planet for its greenery, flowers, and throngs of wildlife who visit — and Mumma didn’t have to schlep through thigh-high snow all winter.

The change in feeding area reset Poe’s murderous hatred toward Rave. By feeding Poe and family on Animal Planet and Rave on the winter rock in the upper yard, I’d restored a modicum of peace.

Until about a week later when Rave thought Poe’s rock looked tastier than hers. Or perhaps, she remembered switching rocks in the warm weather with her dad, Odin. Hard to say for sure what prompted her to move to the woods near the summer rock when our new arrangement worked so beautifully.

Poe was NOT pleased about Rave’s decision.

For the umpteenth time I tried to capture Rave to bring her to a rehabber. And once again, she outmaneuvered me. Maybe she’d be okay on her own? The question replayed on an endless loop, followed by the grave reality of a fox, Great Horned Owl, Fischer cat, raccoon, or black bear crossing her path during the night.

Sleepless nights wore me down.

For two-plus-weeks I wrestled with what to do. Then one day I stopped looking at the situation through my eyes — human eyes — and viewed it from Poe and Rave’s perspective. Once I did, all the years of researching corvids flooded my mind with ideas.

One of crows’ amazing abilities is delayed gratification. Meaning, crows will wait for food if the food they’re waiting for is tastier than the scraps that await them now (Ravens can do this, too, but don’t when they’re injured).

With this theory in mind, I offered Poe a deal.  As the alpha, she’s the only crow I needed to convince. The others would fall in line behind her.

“Poe, if you let Rave eat, I’ll bring out your favorite treats after she’s safely out of sight.”

Now, I’d love to tell you Poe agreed right away, but the truth is, she wasn’t thrilled with the idea at first. Every time I served breakfast, lunch, or dinner, the crows emptied the rock within seconds. Just once I needed Rave to beat Poe to the rock.

It took about three days before Rave worked up enough courage to race Poe to the rock. Afterward, when Rave hopped back into her new wooded digs, I offered Poe raw chicken breast, her favorite kibble, and of course, I replenished the peanut pile. 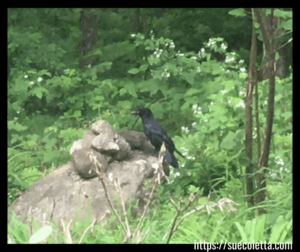 Rave on her own special rock.

Day after day, Poe waited for Rave to eat and I made good on my promise. But then, Rave would climb up on this new rock at the tree-line to check out the menu before proceeding toward the summer rock.

The proverbial lightbulb blazed on. If I used both rocks — one for Poe and family and one for Rave — I could potentially decrease the animosity between them. And it worked. For the next few weeks, Poe never ventured near Rave’s rock at feeding time, and vice versa.

What happened next stunned me into submission.

Toward the end of nesting season, Poe sent the fledglings and elder siblings on patrol with Edgar. Shakespeare, known fondly as “Shaky” (Poe’s mini me), stayed with Mumma. Breath trapped in my lungs as Poe swaggered into the woods in search of Rave. Uh-oh. This can’t be good.

Moments later, “low-talking” indicated Poe and Rave were hashing out a few things. Shrubbery obscured my view. There’s nothing I could do but wait. Watch. Pray Poe wouldn’t morph into Hannibal Lecter or Buffalo Bill.

After several heart-stopping minutes, Poe sauntered out of the woods for a little worm-hunting while Shaky played lookout (since birds are most vulnerable on the ground, crows post a sentinel in the trees). To my surprise Rave lumbered right past Poe, so close the feathers on their wingtips almost touched. Rave climbed up the rock to the feast on chicken thighs, peanuts, sunflower seeds, and kibble. Poe even allowed Rave to eat the dead mouse!

That’s when it dawned on me — these two majestic animals had struck a deal. 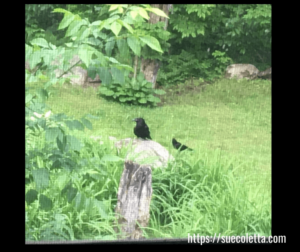 Poe watching Rave’s six from the grass below.

With this new arrangement, Rave waited for the crows to tell her if it was safe to step into the open.

Many sharp-shinned hawks flooded our area, and an injured raven equaled easy prey.

In return for Poe’s service, Rave only ate half the food. She even tore off a piece of chicken and tossed it to Poe on the grass below.

Each year when the new fledglings leave the nest, Poe escorts the crowlettes to my yard to practice landing on branches and learn how to slalom through the maze of trees. Normally, it’s a special occasion filled with hilarity and awe.

When Poe brought the fledglings, trepidation surfed their wake. Rave still asked for permission to approach the rock, but Poe’s cutting glare indicated an emphatic, “Don’t you dare come near my babes.”

What could I do? I couldn’t scold Poe for protecting her young. I also couldn’t let Rave starve. A niggling sensation burrowed bone-deep for the next three weeks. Every time Poe, Edgar, and the elder siblings left to teach the fledglings crucial life lessons, I jogged down to the rock to feed Rave.

The situation wasn’t ideal for any of us, but we dealt with it. Until we couldn’t any longer.

Animal Planet turned menacing — dangerous — as a rebellious fledgling ventured past the rock into the woods, in line with Rave’s hiding spot, her home-away-from-home doubling as a hollowed bush.

Poe scolded the fledgling to back away, but he refused to obey. That tiny crow acted like he’d been sworn in as the new sheriff in town, a LEO hellbent on destroying the interloper in their midst.

The situation spiraled toward disaster.

One sultry July morning he’d had about enough of Poe’s “rules” and swooped down in full attack-mode. Ear-piercing caws tornadoed through the trees. I raced toward the woods to intervene before the others joined their brethren.

Could Rave be a mother? What if the scuffle with Poe’s fledgling convinced her to find her own? Crows and ravens have similar nesting patterns. If Rave had chicks in the nest when she got hurt, they’d be fledging, too.

More and more I became convinced that she was searching for her family during those three days away. Though this theory filled me with warmth, I still panicked every time she left. Until the day Rave soldiered into the yard with more confidence than she’d had in months, and her shiny black plumage had regained its luster.

For hours she perched on a rock near the house and exercised the injured wing. She even attempted short, low flights, about two feet off the ground for ten feet at a time. Day after day for a solid week, she waited for Poe to soar out of sight before practicing her flying, each day gaining more lift. 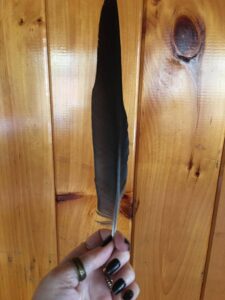 When I bustled down the hill to Animal Planet the following day, one flawless raven feather laid on the rock — a thank you from Rave — and I wept, keening over my loss. I’d prayed for Rave to heal, to thrive, but I never got the chance to say goodbye.

Would I ever see her again?

All summer I searched the sky for Rave. Every now and then my husband said he heard gronking in the woods, which brought me some solace. Still, I longed to see her one last time.

Two weeks ago, I had an early appointment that forced me out of the house early on a Friday morning. As I hustled up the walkway, gronk, gronk, gronk emanated from the woods across from the driveway.

I darted across the dirt road. “Rave?”

A black silhouette peeked out from behind a tree trunk. “Gronk, gronk.”

“I wish I could stay, but I can’t. Please come back, baby. I need to make sure you’re okay.”

A week rolled by with no word from Rave. Last Thursday, she strutted across Animal Planet with her bill held high, chest out, confidence and pride oozing off every feather. When she stepped on to Poe’s rock, disappointment crossed her face. The crows had devoured every morsel.

Rave stared up at the window. “Gronk, gronk?”

That’s all the reassurance she needed. With her spectacular black wings spread wide, Rave leaped into the air and flew to the branch overlooking the rock. I bustled down to Animal Planet, my gaze locked with hers, my emotions rising over the rims of my eyes, joyous tears spilling down my cheeks. Rave’s healthy, happy, and loved. 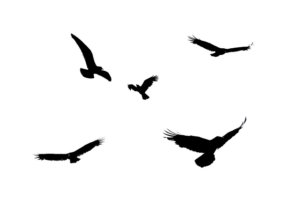 Now, pull the screen away and look at the colors. It’s a rose garden. Brown = soil (exposition/narration). Red = roses (action/dialogue). Green = leaves (emotion, inner dialogue, and foreshadowing). Too much soil, you’ll have gaps in your garden, wasted space. Too many leaves will overshadow your roses. With too many roses, you can’t see the beauty of each blossom.

This technique is easy to do in Word. I wouldn’t recommend it for a blog, as it’s labor-intensive to manually input colored highlights via CSS. You’re worth it, though. 🙂

One last note: If you come across sentences that contain emotion, exposition, and/or action, it’s fine to highlight it with one color. No need to nitpick. You’re looking at the story as more than the sum of its parts. 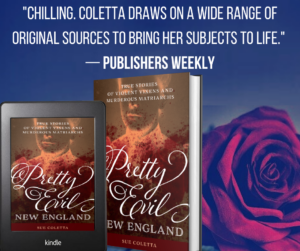 22 thoughts on “Use Color to Test Your Story”