Often people will start reading a series with book number one. “You can begin with any story,” I’ll tell folks interested in reading my Bad Hair Day series. But they insist on starting at the beginning. “That’s fine,” I’ll say, but is it really? 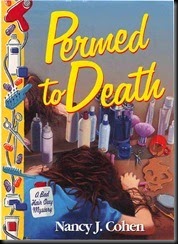 I am thinking how that first book is not the best example of my writing skills today. How long ago was it published? In 1999. And the book had probably been in production for a year before. So that means I wrote it sixteen or more years ago. Don’t you think my writing has improved since then? Yet here is this potential fan evaluating my entire series based on that one book. You’d hope she would cut me some slack.

At least I got the rights back to my early futuristics. I revised those stories before making them available in ebook formats. No problems there.

I do not have the same opportunity with my mysteries. But even if I did, would it be a good use of my time to revise all of my earlier stories? Or is it best to leave them in their pristine state, an example of my earlier writing style? If so, let’s hope that the readers out there coming to my series for the first time will approve and understand.

Sometimes the opposite is true. A writer’s early works are his best efforts, before he gets rushed to meet deadlines or to quicken production. In such cases, the later writing might suffer. I’ve seen this happen with some favorite authors.

So what do you think? If you want to read a new series, do you begin with book one or with the latest title?

Now for some BSP. My new book, Warrior Lord (Drift Lords Series #3) is being released on Friday, August 1.