Jim’s Reader Friday question got me thinking. What is the special sauce that ignites a writer’s brain? Would a new writer know when to run with an idea and when to let it go? Maybe. Maybe not.

With that in mind, I’ll share the following tips from critically acclaimed author and beloved writing instructor, Gary Provost. Incidentally, these tips can be used for fiction and nonfiction, if your nonfiction falls into the “story” category (i.e. true crime, historical, narrative nonfiction, etc).

Gary Provost created a simple paragraph to encapsulate the dramatic arc in a story.

Once upon a time… something happened to someone, and he decided that he would pursue a goal. So he devised a plan of action, and even though there were forces trying to stop him, he moved forward because there was a lot at stake. And just as things seemed as bad as they could get, he learned an important lesson, and when offered the prize he had sought so strenuously he had to decide whether or not to take it, and in making that decision he satisfied a need that had been created by something in his past.

This works because of its classic dramatic structure, which is the most satisfying type of story for the reader. It’s brilliant, if you take the time to dissect it. For now, I’d like to concentrate on a quick and dirty shortcut to test a story idea.

Gary Provost thought of stories in terms of a series of “buts.”

Joyce is a poor secretary, but she meets a millionaire and marries him.

She’s married to a millionaire, but the marriage goes sour.

She wants to end the marriage, but she (allegedly) thinks she’ll be left penniless.

She perhaps has a motive for murdering her husband, but so do other people.

After the murder, police suspect her, but she passes two polygraph exams at two different times and places. One, a highly regarded expert.

She goes back to court to get the polygraph tests allowed, but Judge Smith still will not allow them.

Someone claims to have heard shots at 3:30 A.M., but the medical examiner says that Stanley died around 5:30 A.M., consistent with Joyce’s story. She seems to be telling the truth, but it was five minutes from the time of the Colorado phone call to the call to 911.

Three days after the murder a cop tells the medical examiner that he saw signs of lividity, indicating that the body had been dead for a few hours.

But Wetli, the medical examiner, reviews his material, still comes to the same conclusion. Stays with that conclusion for three years.

No charges against Joyce, but the Miami Herald starts an anti-Joyce campaign, demanding that she be brought to justice.

Newscaster Gerri Helfman is about to get married, but her father is murdered.

No charges are brought against Joyce, but Stanley’s family pressures the state’s attorney’s office to come up with something.

And on and on it goes. 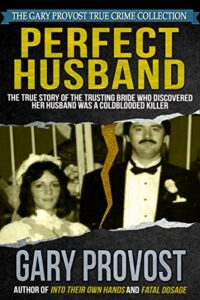 The above series of “buts” Provost used in a book proposal for a true crime book entitled Rich Blood. The proposal started a bidding war between publishers.

In the end, he decided to write Deadly Secrets instead. Turned out to be the right move because Deadly Secrets became the mega-hit Perfect Husband: True Story of the Trusting Bride Who Discovered Her Husband was a Coldblooded Killer.

Use a series of “buts” to test your story idea. Obviously, a “but” won’t fit every sentence. When it doesn’t, try “and then.” But a “but” should follow “and then” soon. Why? Because “buts” are complications. Complications = conflict. And conflict drives the story.

Husband kills wife, and then stuffs her body into a 3ml bag, and then drives to a secluded area to bury her, but his foldable spade isn’t in the backseat. Did the neighbor borrow it again?

When you write don’t keep all the “buts” and “and thens.” Think in those terms, but you don’t want all of them in the final draft. Over time your story sensibilities will automatically search for (nonfiction) and/or apply (fiction) this rhythm.

The point is, whether we write fiction or nonfiction, we need to find the story beneath the headline or first spark of an idea. Without a narrative driven by conflict, the story will fall flat.

Five pieces of wisdom from Gary Provost’s 100 Ways to Improve Your Writing.

Learning new words is much less important than learning to use the words you already know. Think about your ideal reader. If he or she wouldn’t understand your word choice, you might as well be writing in a foreign language. Over time finding the right word becomes easier, almost a subconscious act. Until then, be intentional with every word.

Whether a lead is the first sentence, the first paragraph, or even the first several paragraphs of your story, it should pique a reader’s interest by raising story questions and give readers someone (or something) to care about before delving into the backstory.

A strong lead delivers on the promise it makes.

Meaning, make your point by answering “who, what, when, where” in the first paragraph. Make the reader wait for “why.” Unless, of course, the why is the character’s goal.

When you edit, ask how each sentence works for the paragraph. Ask why it’s there. Does it have a purpose? Great! Then keep it. If you can’t pinpoint why you included that sentence, hit DELETE.

In writing, the word style means how an idea is expressed, not the idea itself.

A reader usually picks up a story because of content but too often puts it down because of style.

The words you write make sounds, and when those sounds are in harmony, the writing will work. 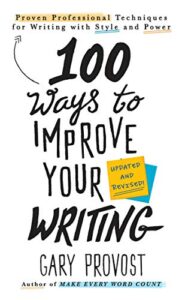 “The writers’ writer” authored thousands of articles, columns, and dozens of books covering most every genre. His highly acclaimed Writers Retreat Workshop, and video and audio courses remain available through writersretreatworkshop.com.

What’s your favorite piece of advice here? Care to add a tip?