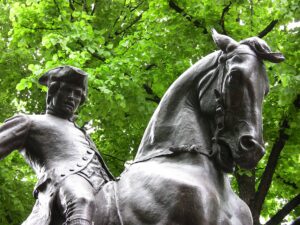 My dad loved poetry. Not the flowery kind; he preferred the kind that tells a story. Among his favorites were “The Shooting of Dan McGrew,” “The Face on the Barroom Floor,” and “The Betrothed.”

Another, which he would often recite, is “Paul Revere’s Ride” by Henry Wadsworth Longfellow. I remember sitting in front of our fireplace as Dad began…

Listen, my children, and you shall hear
Of the midnight ride of Paul Revere,
On the eighteenth of April, in Seventy-five;
Hardly a man is now alive
Who remembers that famous day and year.

He said to his friend, “If the British march
By land or sea from the town to-night,
Hang a lantern aloft in the belfry arch
Of the North Church tower as a signal light, —
One, if by land, and two, if by sea;
And I on the opposite shore will be,
Ready to ride and spread the alarm
Through every Middlesex village and farm,
For the country folk to be up and to arm.”

And on we go. Now here’s some trivia for you. On April 18, exactly eight years after Paul Revere’s ride, George Washington issued his Proclamation for the Cessation of Hostilities, which effectively ended the war!

Although the proclamation before alluded to, extends only to the prohibition of Hostilities, and not of the annunciation, of a general peace; yet it must afford the most rational, and sincere satisfaction, to every benevolent mind. As it puts a period, to a long and doubtful test, stops the effusion of human blood, opens the prospect to a more splendid scene; and like another morning Star; promises the approach of a brighter day, than hath hitherto illuminated the Western Hemisphere—On such a happy day, a day which is the harbinger of peace, a day which completes the eighth year of the War, it would be ingratitude not to rejoice! it would be insensibility not to participate in the general felicity.

Well, it is April 18 once again, and we all know we’re living in a whirlwind right now. How should that affect how we write? I think the vast majority of the reading public desires fiction that “opens the prospect to a more splendid scene.” No matter the genre, is there hope at the end of your book? Hope that maybe we can stop an “effusion of human blood” and at least discern the “approach of a brighter day”?

Even apocalyptic fiction operates as a warning of what can come about if we don’t right the ship. And that’s a form of hopefulness.

I recall reading somewhere that Flannery O’Connor’s brutal fiction was really about “grace being offered.” When such grace is rejected, it is tragic. But the true tragic in literature is always the flip side of hope, and that’s the point. Or should be. Tragedy without the offer of grace is the pits.

So I ask this question today: do you have hope in your fiction? Does the concept occur to you as your write? Do you think it is a valid concern in our increasingly nihilistic age? Is it worth pursuing? Leave your thoughts in the comments!

And now here is JSB’s alternative version of the Longfellow poem, called “The Midnight Write of Paul Revere.”

Listen, my children, and you shall hear
Of the midnight write of Paul Revere,
On the eighteenth of April, in Twenty-one;
To follow his dream and get it done
He determined to write, and write without fear.

He said to his friend, “If the publishers fail
To take my book and give me some dough,
I’ll go and do indie and thus prevail
With ebooks, and print, and audio.
A stand-alone here, and a series there
And I at my keyboard pounding with flair
Ready to write and money collect
Through wide distribution or Kindle Select
And take all that jack by deposit direct!”

44 thoughts on “Writing for a Brighter Day”