Yesterday I read a great piece by Lev Grossman (author of the Magicians trilogy) on finding his author voice through writing fantasy fiction (‘Finding my Voice in Fantasy‘). He admitted that he felt something was missing in the two ‘literary’ novels he had published and that, when he was producing those works, the writing came slow and hard as if he hadn’t quite found his ‘voice’ yet. For Grossman it was writing fantasy, and the liberation of writing against the literary expectations he had imposed on himself, that gave him the chance to discover his true ‘voice’ in his writing.

For Grossman “it was the most profound, intense writing experience I’d ever had. The icy grip of reality on my fiction cracked, and a torrent of magic came rushing out”. I love that line – for it encapsulates beautifully the experience of truly being in the writing ‘zone’ when your author voice takes over and allows the story to emerge.

I’ve recently delved into the writing world of YA and middle grade fiction and what occurred to me was most surprising. I expected my YA voice would be an easier one to access (I still feel most days like I’m 16 after all…) but instead, it was the middle grade world that set my voice free. Maybe it’s because I feel attuned to my nine year old twin boys’ world, perhaps it’s because I still read aloud to them each night and these books tend to be for the most part middle grade fantasy novels…who knows? Whatever the reason I felt the exact sense of liberation that Grossman describes.

I remember when I was writing my first book, Consequences of Sin, I certainly felt as if I was channeling the voice of my heroine Ursula Marlow – and when I returned to writing the third book in the series, Unlikely Traitors, that voice was inside me, ready to be channeled once more. I hesitated before deciding to write a middle grade book because I wasn’t really sure I’d be able to access that kind of ‘voice’ within me.  To my surprise the voice that emerged was just as strong as Ursula’s.

The upshot of all this, is that I think many writers need to dabble in different genres to explore aspects of ‘voice’ which they may never have expected. I know plenty of writers who consider themselves ‘literary’ and, by default, superior to those of us who write commercial or genre fiction. For many of them the act of writing is a struggle (sometimes I wonder if they feel that the angst of it all somehow adds to the mystique). I wonder, if they allowed themselves the freedom to explore other genres, whether they would discover a new and more accessible ‘voice’ within them. I can only hope that others take Grossman’s lead and realize, as he did that:

“Writing about magic felt like magic. It was as if all my life I’d been writing in a foreign language that I wasn’t quite fluent in, and now I’d found my mother tongue. It turned out I did have a voice after all. I’d had it all along. I just wasn’t looking for it in the right place.”

So tell me TKZers how did you discover your writer’s voice?

Genres matter when you attend a conference. I started out in romance, attending National RWA and Romantic Times conventions. At RWA, we dressed in business attire and wore sequins to the Awards dinner. We taught workshops or we spoke on panels where the emphasis was teaching other writers the craft and business of writing. The same was true for smaller chapter conferences held around the state and throughout the country. Editor/Agent appointments were a staple for this type of working writers conference.

Romantic Times, in contrast, was a fan convention. Here we’d meet readers, booksellers, and reviewers in a fun, party-type setting. I still dressed in business casual during the day. At night, people wore costumes to themed balls and parties. As RT attracted more writers, they added writing tracks to educate aspiring authors. Now they’ve expanded to include other genres just as RT has changed its name to RT Book Reviews. It’s still a great conference to meet industry personnel and readers.

Then I switched to writing mysteries and attended Malice, Bouchercon, and SleuthFest. What a difference! People wore jeans! There were men in the crowd! Panelists were expected to be entertaining and witty and mostly talked about their books. Bouchercon and Malice are fan conventions while SleuthFest is a writers’ conference. SF has a forensics track and workshops for different levels of writing, along with editor/agent appointments.

The one thing these events have in common? Writers hang out at the bar, the hospitality lounge, or the dealers’ room and network like crazy. Costly swag gets picked up along with candy and pens. Bookmarks and other papers lay around the promo tables like unloved orphans.

And then I attended Necronomicon, my first SciFi/Fantasy/Horror convention. Lo and Behold! Another culture shock! In many ways, this convention was similar to the mystery cons. The panels were professional and moderated by a host. Aspiring authors attended in abundance. Instead of a forensics track like at a mystery writers conference, this convention had a science track led by scientist guests. However, here’s the biggest difference: Gamers. One darkened breakout room held 3 rows of computers where people sat  playing Halo. Other guys sat at round tables absorbed in role playing games. 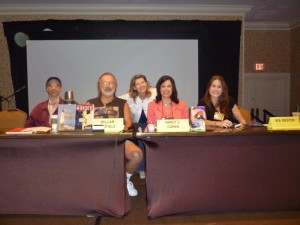 Workshops went on into the wee hours of the night. I was scheduled to speak on three panels and had to request the organizer not to book me after dinner. Authors who paid for a spot in Author’s Alley sat at tables in a hallway and sold their own books. The Dealers’ Room was similar to the ones at mystery cons, where authors hope one of the vendors has their books for sale or else we make a consignment deal. I noted only one bookseller at this convention. Most of the vendors sold jewelry, games, and other knickknacks.

All in all, this conference was a valuable introduction to an entirely new audience. The panels were interesting as well as stimulating, and parties ranged into the night if you were so inclined. Check out my personal blog for more photos and reports on the panels I attended. Keep in mind that this was not like the big SciFi cons where TV and movie stars attend and people roam around in costumes. There was a costume contest, but it was one night only. This felt more like a writers conference aimed at SciFi/Fantasy authors. 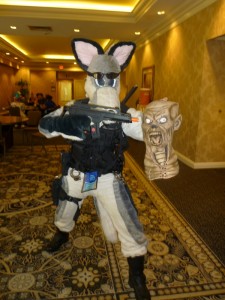 Would I attend again? The jury is still out on that one. While the conference was comped for me since I was a speaker, I still paid over $500 for a hotel room. I sold two books. Granted, this audience is more likely to order the ebook version, but would I spend that money again instead of attending a conference that targets mystery or romance fans? We’ll see. The exposure to a new crowd is always good, and I had a great time meeting new people. I guess as in any choices we have, it depends on the budget.

If you have crossed genres, were you surprised by the differences at the conferences you attended? 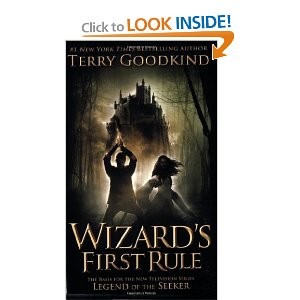 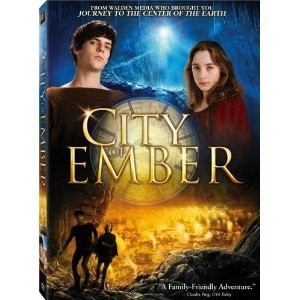 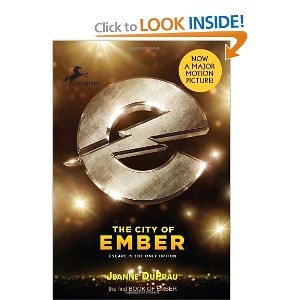 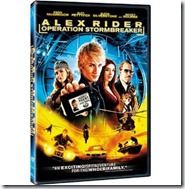 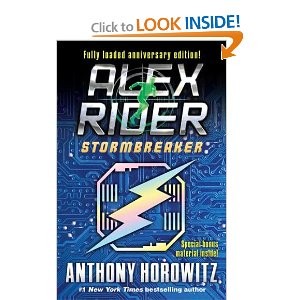