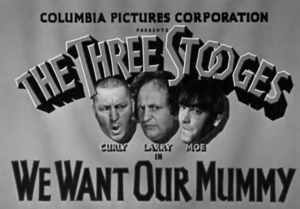 There are times when I need ten minutes of The Three Stooges. You know what I’m talking about. You’ve spent a long day writing some tough pages. Or you were bottled up in your cubicle at work, untangling your boss’s mess. Or maybe you were caught up in the latest news cycle, and you find yourself neck deep in the blues.

That’s what the Stooges are for. You don’t have to think. In fact thinking is precisely the wrong thing to do when watching the boys.

Now, I know the Stooges are not everyone’s comedic cup o’ noodles. Moe is often hard to take. Anything could set him off and get you a slap in the face or, worse, two fingers in the eyes. I had my run-ins with bullies as a kid, so Moe always made me uncomfortable (in real life, Moe Howard was a delightful man—who I met—and a great storyteller about the film business and the history of the Stooges).

But there is always Curly to save the day by giving us a nice, hearty belly laugh. (When Curly suffered a stroke in 1947, he was replaced by his and Moe’s real brother, Shemp. Most of my kid contemporaries didn’t like Shemp, but I did. While no one could ever replace Curly, Shemp is funny in his own way.)

Anyway, the other day I was in need of a respite from brain work and went to a Stooges short I’d recorded on the telly. It was We Want Our Mummy (1939). As you might guess, it’s about the boys, playing detectives, going to Egypt to try and find a mummy on behalf of a museum.

Well, the opening made me laugh, but for another reason. It was a full-on example of expository dialogue. Of course, these were short comedies that were produced like pancakes, and had absolutely no pretensions about being anything else. Still, it provides me with an illustration for teaching purposes.

The short begins in a museum of ancient history. Two professors in stuffy garb speak to each other in the Egyptian Room.

Prof 1: Bad news. The police aren’t able to find any trace of Professor Tuttle. His disappearance has them completely baffled.

Prof. 2: That ruins our hopes of ever finding the tomb of King Rutentuten. Professor Tuttle is the only man alive who knows its exact location.

Prof 1: First Professor Dalton dies mysteriously, and then Tuttle disappears. Something terrible happens to anyone who tries to explore that tomb. I’m telling you, it is the curse of Rutentuten!

Prof 2: But unless we secure the mummy of King Rutentuten, our entire collection is worthless. We must find Tuttle!

Prof 1: Well, I’m doing the best I can. I sent for the three best investigators in the city. And they are our last hope!

Okay, King Rutentuten is funny. But the dialogue, as you can see, is there merely as set-up material. It’s blatantly obvious, and I’m sure the writers, Elwood Ullman and Searle Kramer, snorted as they wrote the lines.

But in our fiction, such dialogue is a drag. It always sounds phony, which turns the reader against you. They are investing their time (and perhaps some discretionary income) on your book. You want them into the story, not catching you in a cheat.

The primary way to avoid this is: Do not have characters reveal information that both characters already know. Here’s a ham-fisted example of what I mean:

“Sally! I didn’t expect to find you here at Central Market.”

“Bill? What he doesn’t know won’t hurt him. Being a cop on the street, he has enough to worry about.”

Ouch. Most of the time you’ll find such dialogue on the opening pages of beginner’s manuscripts. They think they have to get a bunch of exposition out there so the reader will understand what’s going on. Not so. Act first, explain later.

On the other hand, dialogue can be used to reveal information when the info is hidden within a tense exchange.

Let’s say the key bit you want to reveal is that Sally is married to a cop. The scene might go this way:

“Sally! What are you doing here?”

“Are you meeting Bill?

“Is that your business?”

“Being a cop’s wife. Nervous time. I can understand—”

“Thanks for your concern. Can I finish my meal in peace now?”

So relax about exposition, and get your characters into more arguments. Readability will go up, and reader trust in you as an author will not be compromised. And you will be able to sit back and utter a satisfying nyuck nyuck nyuck. (Further dialogue techniques may be found here.)

For giggles, you can watch the opening dialogue below…and the rest of the short if you so desire. Excelsior!

22 thoughts on “The Curse of Expository Dialogue”