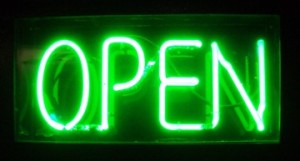 There’s a great Far Side cartoon (among so many great ones from the genius Gary Larson). It shows the back of a man seated at a desk. He has a pencil in his fingers, but his hands are grabbing his head in obvious frustration. In front of him are a series of discarded pages with MOBY DICK, Chapter 1 at the top. They say:

Ah, we’ve all been there. We often talk about the need for a grabber opening here at TKZ. That’s why we do first-page critiques. The goal is simple: make the reader want to—need to—read on.

If you can do it in the first paragraph, so much the better.

And with the first line, better still!

Terry sparked a discussion on opening pages earlier this week. Let’s drill down to opening lines. There are three types: Action, Voice, and Wood.

When the first line drops you right into some intriguing action, you’ve got it made. (All you have to do now is hang a novel on it. Ha!)

One of my favorites is from my man John D. MacDonald’s Darker Than Amber, a Travis McGee novel:

We were about to give up and call it a night when somebody dropped the girl off the bridge.

I mean, come on! We’re going to read until we find out who that girl is and why she was tossed in the drink.

They threw me off the hay truck about noon.

Penny Dawson woke and heard something moving furtively in the dark bedroom. – Darkfall

Katharine Sellers was sure that, at any moment, the car would begin to slide along the smooth, icy pavement and she would lose control of it. – Dance With the Devil

Remember, dialogue is action, too (waving at Terry). Koontz used to write opening lines just to see what they sparked. This one hit him:

“You ever kill anything?” Roy asked.

When he wrote that, he didn’t know who Roy was or who he was talking to. So he wrote a novel to find out—The Voice of the Night.

In my humble opinion, my best opening line is in Try Darkness, a Ty Buchanan legal thriller:

When the voice is clear, unique, arresting, and immediately tells you the kind of story it’s going to be, you’ll want to keep reading. Mickey Spillane wastes no time in Vengeance Is Mine!:

The guy was dead as hell.

When I was a little girl I used to dress Barbie up without underpants. – High Five

Usually we’re going to be in First Person POV for voice. But not always. Here, for example, is the opening of Elmore Leonard’s Get Shorty:

When Chili first came to Miami Beach twelve years ago they were having one of their off-and-on cold winters: thirty-four degrees the day he met Tommy Carlo for lunch at Vesuvio’s on South Collins and had his leather jacket ripped off.

Notice that the leather jacket is ripped off and not stolen. The latter is neutral voice. The former is hot voice, setting up the tone of the book.

There’s an old saying: Your story begins when you strike the match, not when you lay out the wood. I like that. It holds true for any genre. But with literary fiction, and epic fantasy or history, an exception is sometimes made. Presumably, fans of these genres are patient at the beginning, knowing they’re in for a long, immersive ride.

Certainly, these genres can begin with action, as in Terry Brooks’ The Sword of Shannara:

The sun was already sinking into the deep green of the hills to the west of the valley, the red and gray-pink of its shadows touching the corners of the land, when Flick Ohmsford began his descent.

All well and good, as the world building weaves in with the action.

Now have a look at the opening line of The Fellowship of the Ring:

This book is largely concerned with Hobbits, and from its pages a reader may discover much of their character and a little of their history.

And boy, howdy, do we get the history! Fifteen pages of it. This is laying out the wood. But fantasy readers do not seem to mind.

Similarly, David Morrell’s long thriller, The League of Night and Fog, also has a history beginning:

A phrase invented by the Nazis, the Night of the Long Knives, refers to the events on the night of June 30, 1934, in Austria and Germany.

The next eight pages tell us about Hitler’s rise to power, the advent of World War II, and the start of the death camps. It is dark yet riveting history. Morrell lays out this wood, and it stays with us, hovering over the action to come.

There you have it. Three ways to write an opening line. Try them out in your own work. I also recommend you play with all three as a creativity game and idea sparker. Who knows? One of them may jump out and grab you and say, “Now write me the novel, kid!”

And now, if I may, in the spirit of our occasional indulgence here at TKZ, a bit of SSP—Shameless Self Promotion. My latest thriller release begins: 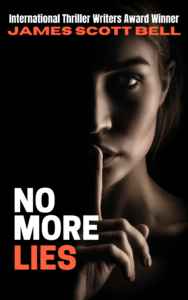 The book is No More Lies. It’s a novel for which I got the rights back (former title: Deceived), and which got some of the best reviews of my career. Publisher’s Weekly said:

A master of the cliffhanger, creating scene after scene of mounting suspense and revelation . . . Heart-whamming.

Bell delivers with this compelling and challenging story of greed, evil and redemption. Worthy characters bring to light situations that can be both beautiful and terrifying. This pure thriller with a roiling plot is not to be missed!

And because money is tight right now, I’m making it available on Kindle this week for 99¢. Grab it here. Outside the U.S., go to your Amazon store and search for: B0B836SCRY

Now back to our regularly-scheduled blog. Do you have an opening line you’re particularly proud of? Share it. Or share one from an author you like. Or both! 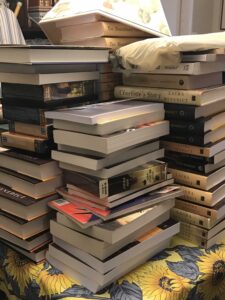