Foils and antagonists are two types of characters that serve different functions. An antagonist or villain works in direct opposition to the protagonist or hero. The antagonist presents obstacles to thwart the hero from achieving his or her goal. The foil, on the other hand, isn’t necessarily working against the hero. A foil’s qualities simply differ from the hero’s.

The hero and foil often work together, such as Sherlock Holmes and Dr. Watson. The key difference between the foil and antagonist is that the antagonist’s actions oppose the hero while the foil’s character traits create conflict. Also, a foil shines the spotlight on another character’s personality traits and/or flaws, without necessarily thwarting their plans. When done right, however, there will be conflict!

The term “foil” came into its current usage as a literary device from the concept of putting tin foil behind a gemstone to make it look more brilliant. The foil character works in the same way—to add credibility to the hero or to spotlight his or her faults.

Opposing personalities add a great deal to a story. Pairing these two characters can transform a ho-hum scene into one with explosive conflict. But we need to—dare I say—plan these character traits in advance. 😉

Conflicting personalities rub against one another, which allows the writer to maximize slower moments within the plot. After all, if everyone in the scene “plays nice,” we risk boring the reader. With a bit of character planning—oh, my, there’s that word again—clashing personalities lead to conflict-driven scenes.

Positioning the foil and main character in close proximity will draw readers’ attention to the hero’s attributes. A story could have more than one foil. In my Mayhem Series, I created a foil for my hero and another for my villain.

By crafting opposites, these characters’ scenes crackle with tension. Foils show the hero’s and/or villain’s strengths and weaknesses through friction. Remember to include the element that ties the two characters together, a believable bond that’s stronger than their differences.

Since Garry mentioned my video excerpt in the comments on Thursday, I’ll include it as an example of the foil/hero relationship. Don’t worry. There’s no need to watch the entire video (unless you want to). You should recognize the opposing personalities pretty quick.

Have you used a foil in your story? Please explain. Or: What’s your favorite fictional foil/hero relationship? 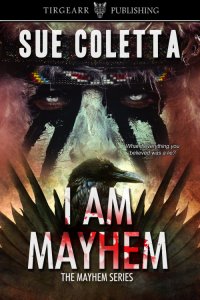 As bloody, severed body parts show up on her doorstep, Shawnee Daniels must stop the serial killer who wants her dead before she becomes the next victim.

But can she solve his cryptic clues before it’s too late? Or will she be the next to die a slow, agonizing death?

Preorder for 99c on Amazon.

22 thoughts on “When Opposites Attract”