The following is a true story. While reading, take note of the bracketed MRUs [Motivation-Reaction Units in red] and scene/sequel structure in parenthesis (in blue), and my unrest can double as a TKZ lesson. 🙂 We’ve talked about these subjects before. Industry professionals write with the MRU (also called action/reaction) construction without conscious thought. For a new writer, learning this rhythm and flow can be a game changer. 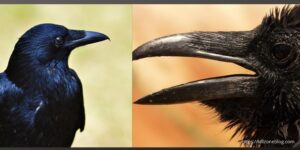 For the last five days I’ve been in the middle of a crow verse raven war. I love both species, but I also understand why they’re fighting. Doesn’t mean I have to like it.

It all started last Wednesday when a vicious red-tailed hawk chased Shakespeare — the runt of my beloved crow family — past the dome window in my living room [Motivation].

Big mistake. No way could I not get involved (Scene Goal).

So, I bolted outside to help [Reaction]. Allan, Shakespeare’s older brother, was with her. Both seemed exhausted [Motivation] (Scene Conflict).

I called for Poe, their mother [Reaction]. She called back, but she wasn’t nearby [Motivation]. I called again and again, each time panic rising in my tone [Reaction].

Poe soared into the yard, landed on “her” tree branch, and gazed down at me [Motivation]. I pointed over to the left and screamed, “Hawk! The babies are in danger!” [Reaction] (Scene Disaster)

And Poe took off in that direction. Seconds later, a chorus of caws erupted in the treetops. It’s not smart to anger a mother crow — any crows, for that matter. Perched atop the tallest conifer, Poe called for the rest of her murder.

The hawk froze, like, “What the heck’s going on? Did that human call for backup?”

Within moments, the rest of Poe’s family soared in from all directions and attacked. [Motivation] I stood motionless, awestruck by the intelligence of my black beauties and the bond we’ve developed [Reaction] (Scene Reaction). For any hawk lovers out there, s/he’s alive. At least, I assume so. Angry caws trailed into the distance as the crows escorted the hawk out of their territory. If you’re wondering, Shakespeare and Allan flew away unscathed. 🙂

Later that same day, my husband and I had just finished lunch when a second commotion exploded outside [Motivation].

I had no idea my day would take such an ominous turn.

When we rushed into the yard [Reaction], I found a raven with an injured wing [Motivation]. My heartstrings snapped in two [Reaction]. On one hand, I refused to sit by and let that raven die. On the other, I couldn’t blame Poe and Edgar for protecting their chicks. Ravens tend to target a crow’s nest for an easy meal.

How could I be angry over the corvids acting on instinct? If an intruder was sniffing around my home, nothing could stop me from defending my family.

Even so, I couldn’t let the raven die. I’m just not built that way.

After four hours(!) of trekking through the woods after “Rave,” I came to the conclusion that I’d never catch her (Scene Dilemma). But I had to do something (Scene Decision).

I called New Hampshire Fish & Game (Scene Goal). A large part of their job is to help wounded animals, right? Well, not exactly. Much to my dismay, their “rules” don’t apply to corvids [Motivation].

The officer’s response infuriated me [Reaction].

“Since we’re talking about corvids,” he said, “it’s best to let nature take its course. We don’t respond to these types of calls because crows and ravens aren’t endangered. Besides, there’s plenty of them in the state.” (Scene Conflict) [Motivation]

“There’s plenty of people in the state, too, but I’d still try to save a human life.” [Reaction] #BlackFeatheredLivesMatter!

Needless to say, the phone call rolled downhill from there. I was on my own (Scene Disaster). My biggest problem? How to sneak food to Rave without upsetting Poe. Which is a lot more difficult than it sounds.

I waited for Poe and the gang to make their daily rounds in search of intruders within their domain. In a country setting, a crow’s territory stretches for several acres.

Once caws trailed into the distance [Motivation], I bustled up the walkway—my gaze scanning the sky—headed toward the woods where the raven was hiding out [Reaction]. As soon as I’d hustled halfway across the dirt road, Poe rocketed out of a nearby tree [Motivation].

I tried this all damn day. And every single time she busted me. I flung up my hands and tried to reason with her (Scene Reaction) [Reaction for MRU, too]. “Listen, Poe. The raven’s no longer a threat. Can’t you please — please — leave her alone long enough for the wing to heal?”

I tried again (Scene Decision). “Tell ya what. If you let the raven heal, I’ll reward you with a juicy steak.” [Reaction]

Better, but a little more convincing was in order. [Motivation] (Scene Goal)

“Hey, how ’bout you two come to an understanding? You’ll leave her alone if she promises not to go after the chicks once she’s airborne.” [Reaction]

Poe cocked her head, as if to say, “You can’t be serious. That’s not how this game is played.” [Motivation] (Scene Conflict)

“Fine! Then you’re just gonna have to get comfortable with me feeding her. I refuse to abide by your stupid rules.” (Scene Decision) And I stormed off. [Reaction]

Not my finest moment. Whatever. The neighbors already call me “that crazy crow lady,” so if anyone saw me arguing with Poe it wouldn’t even faze ’em.

As darkness rolled in, I lost track of the raven. There wasn’t any more I could do but pray she survived the night.

First thing Thursday morning, guess who’s waiting for breakfast? [Motivation] I brought out the leftovers from a roasted chicken [Reaction] (Scene Goal). The raven grabbed the carcass by the spine and hopped toward the woods. A few feet away she must’ve thought better of it. Stealing the whole thing could paint an even bigger bullseye on her back. Rave tore the chicken down the middle, stuffed one half in her beak, and left the rest on Poe’s rock.

I didn’t see Rave the rest of the day. (Scene Conflict)

On Friday night a tornado-like storm hit our area, complete with 50 mph winds, downpours, and lightning strikes. [Motivation] (Scene Disaster) If the raven survived, it’d be a miracle.

Eagle-eyed on the woods the next morning, I waited for hours as sunbeams speared across the grass. My beloved crows arrived on time. But no raven. Did Rave perish in the storm? In front of the window I wore a path in the hardwood floors. (Scene Reaction) [Reaction for MRU, too]

About 10 a.m. I peeked out the window one last time before hitting the keyboard [Reaction]. And there stood Rave, well-rested, hungry, and disappointed to find the rock empty [Motivation]. The millisecond I stepped on the deck with a fresh plate of raw bacon [Reaction], Poe and the gang emerged from surrounding trees [Motivation] (Scene Dilemma).

While I weighed my options, the crows scolded the raven from all directions. They dared not attack her, though. I have a strict “no fighting” policy, and they know it.

To create a diversion, I tossed half the bacon in the woods and half on Poe’s rock [Reaction] (Scene Decision). Which seemed to satisfy everyone. The saga, however, continues…

20 thoughts on “When Corvids Go Rogue”