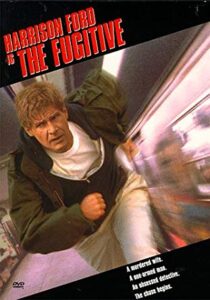 We’ve had some good posts and comments about writing methods, grouped generally under the two broad headings of plotter/outliner and pantser. You can read the latest entries HERE and HERE.

What I want to examine today is a bromide I often hear when this subject comes up. It issues from the pantsing side of the room, and goes something like this: “If I had an outline and knew everything beforehand, that would take all the fun out of writing the book.”

I beg to differ. For the one thing both sides should agree on is that writing scenes is the most fun of all.

Why? Because, of course, the scene level is where the story actually happens, unfolds, gets “discovered.” For the pantser it’s all discovery. For the outliner, the discovery is in finding, and delighting in, the granular details of bringing the scene to life.

Let’s illustrate how this is done. I give you a writer named Jeb David Huggins (this is a mash up of the three writers behind one of my favorite action movies, The Fugitive starring Harrison Ford. Jeb Stuart and David Twohy did the screenplay; Roy Huggins was the creator of the TV series upon which the movie was based).

Jeb has a tight outline for the story and knows the ups and downs and ins and outs of the plot. He’s created a fantastic cast of characters, from Sam Gerard (Tommy Lee Jones) all the way to the Chicago detectives who muck up the case (Ron Dean and Joseph Kosala). Now he starts writing.

And does he knows how to open a thriller! A murder scene and the arrest of respected surgeon Dr. Richard Kimble on suspicion of killing his wife. Trial. Conviction. Death Row.

Then he’s on the prison bus, and there’s an attempted takeover by the inmates. The crash. The train coming! Kimble saves a wounded prison guard, and barely makes it off the train!

Now, in his outline, Jeb has a scene card: KIMBLE JUMPS OUT OF THE PRISON BUS JUST BEFORE TRAIN RAMS IT.

At outline time that was enough. But while writing the scene Jeb gets a happy idea. What if we keep this going? What if the train derails…and heads straight for the escaping Kimble, who is still in leg irons!

Hot dog! (That’s what writers say when they come upon a delightful idea).

More delight comes in the writing of dialogue. You have so much leeway here. Whether you’ve outlined the scene or are pantsing through it, dialogue is yet to be discovered.

In The Fugitive, after the bus escape, Kimble is alive but wounded. The one guy who helps him is Copeland, a big, bad dude from the bus. Really bad. He’s a stone-cold killer. He says to Kimble, “Now you listen. I don’t give a damn which way you go. Just don’t follow me. You got that?”

It’s a great moment which was not in the original script. Sometimes happy surprises are provided by the characters in the scene!

Let’s cut to a scene further on, where Kimble has managed to find some old coveralls and now must sneak into a rural hospital. He has to tend to his wound, change his appearance, find clothes, and get out.

That could be the scene card: KIMBLE HAS TO TEND TO HIS WOUND, CHANGE HIS APPEARANCE, FIND CLOTHES, AND GET OUT.

Both outliners and pantsers need to understand scene structure. I break it down into the Three O’s: Objective, Obstacles, Outcome. This is where you brainstorm.

Kimble’s objective is as described above. You—be ye pantser or plotter—have an idea of the outcome (Kimble will get away, but with more trouble following).

Now the fun of the obstacles. In the movie we have the following: time pressure, finding a room with medicine and stitching supplies; a state trooper arriving; a fax coming in with Kimble’s face; finding a room with a sedated patient; Kimble shaving off his beard…(brainstorm, brainstorm) a nurse enters the room! Kimble hides, nurse leaves, Kimble needs food…he takes the uneaten breakfast of the sedated man…Kimble finds a doctor’s smock and puts it on and starts walking out…(brainstorm, brainstorm) the state trooper is coming right toward him! The trooper says, “Hey Doc, we’re looking for a prisoner from that wreck. He might be hurt.”

TROOPER: Six-one, 180, brown hair, brown eyes, beard. Seen anyone like that around?

KIMBLE: Every time I look in the mirror, pal. Except for the beard, of course.

So far so good. Anything we can add? (brainstorm, brainstorm). Ah! As Kimble is about to walk off, the trooper says, “Hey Doc.” Uh-oh. Why? Then the trooper indicates Kimble should zip up. His fly is open. Happy surprise! (Any time you can add a little laughter relief to a thriller, do it.)

Outcome: Kimble exits the hospital and steals an ambulance. Wait…we can do better. As Kimble comes out an ambulance pulls up, and out of the back the paramedics have trouble with the gurney. Kimble helps, but on the gurney is the guard whose life he saved! The guard starts to say his name, so Kimble nabs an oxygen mask and presses it on the guard’s face.

Now what? Kimble tells the medics to inform the attending physician that the guard has a puncture in his upper gastric area. One medic says to the other, “How the hell could he tell that by looking at his face?”

Perfect! Kimble gets the ambulance, but because of his act of decency (he’s a doctor, he can’t help it!) he is going to get in more trouble pretty quickly.

This is fun! (Note: Outcomes should generally set the character back, make things worse. You can have an objective realized, as in this scene, but then have the good outcome lead to greater trouble down the line.)

Here’s another area for surprise: how we characterize. In The Fugitive, the best lines come from Sam Gerard and the great turn by Tommy Lee Jones. Remember the spillway scene? Kimble has a gun on Gerard. Kimble says, “I didn’t kill my wife!” And Gerard says, “I don’t care!” Great dialogue! (Again, not in the original script; many of these lines were improvised on set.)

And then Gerard has a team with him, who provide more comic relief. At one point Gerard asks his youngest teammate, “What are you doing?” The young man says, “I’m thinking.” Gerard: “Well think me up a chocolate donut with some of those sprinkles, as long as you’re thinking.”

See how much fun we’re having? Yes, even the outliners!

So find your delight in your obstacles and outcomes, your characterizations and dialogue. If you’re doing this right you’ll say “Hot dog” a lot!

Are you having fun yet? Tell us about it. Note: I’m on the road and in the air today, so I’ll be sketchy checking in. Talk amongst yourselves!

16 thoughts on “Scene Writing is Where the Fun Happens”