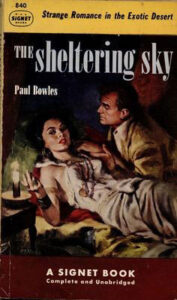 I recently had a defining moment in a used bookstore.

I have mentioned here on a number of occasions that my formative years were delightfully and wonderfully warped by perusing crime fiction on a regular basis. Every drugstore and supermarket had at least one revolving wire rack of paperback novels with several — I’m thinking twenty-four — pockets which could hold four to six books in each slot. Not all of these contained mysteries and detective fiction but it seemed as if more than half of them did. There wasn’t any particular rhyme or reason to the display, either. It wasn’t neat and orderly, with everything arranged by genre or alphabetically by title/ author, Each slot might have as many as six different titles. The book in the front of each slot concealed its brothers and sisters behind it. Browsing accordingly took a while. It also seemed as if titles were only there for a few weeks before they disappeared and a new crop of books took over.  Most of the covers were variations on a theme — weapons wielded by women in various suggestive stages of undress were the order of the day — and had little or nothing to do with the stories. My favorites were the Carter Brown stories and Richard Prather’s Shell Scott mysteries. Scott on each and every cover sported a blond crewcut and a knowing leer. I decided I wanted to be Shell Scott when I grew up. I kind of got my wish, but that’s another story. There were also titles by authors whose names are only remembered by their families, if that, but who no doubt had the same excitement, however briefly, that we do now when we see our names in print and for sale in public.

I used to spend hours browsing those books. I could on a rare occasion sneak one into the house but given that I was ten or eleven it was tough. I still have a few of them but at some point wistfully came to the realization that I was born too late to buy most of them at their cover price of thirty-five to forty cents apiece. Life, however, goes on.

Flash forward sixty or so years. Last week I was in a local used bookstore and noticed that there were new displays of used paperbacks all over the premises. These weren’t just any displays of used paperbacks, either. What I saw were many of the books that I saw a few times in my youth at this or that drugstore. Each of the titles on display at the bookstore was priced at three dollars, eight or nine times the cover price but a bargain in the current collector market.

I buttonholed a clerk I knew and asked him what the story was. He said that the books had been owned by an elderly gentleman who had recently passed away after an extended illness. His longtime caregiver had been tasked with disposing of his estate, which included over fifty boxes of the paperbacks that the store now had on sale. The deceased had a longrunning interest in genre fiction (as well as several boxes of some other printed material which I was told that the store couldn’t, um, “appropriately” sell). There were so many books that the store did not want to go through the books and individually price each one appropriately. It was decided that three dollars per book was a fair average price. I was also told that if a fine gentleman such as myself wanted to make a reasonable offer on the whole kit and kaboodle, as it were, such an offer would be entertained and probably accepted.

I thought about it. Picture the scene in the movie Animal House where the debate between the devil and the angel unfolds on the shoulders of Larry “Pinto” Kroger. The devil was telling me “Buy ‘em! Buy ‘em all, you f*****k! Who cares if your granddaughter goes to college?!” The angel was at the same time telling me, “You have all of those books at home you haven’t read yet! You should donate the money to a charity instead!”

Twenty or thirty years ago I would have jumped on the opportunity to buy those books like it was a three-dollar government mule. My plan would have been to read every one of those books and eventually sell most of them, though not before enjoying their presence and inhaling the scent of old paper and ink. And yes, admiring the covers, too. In the here and now, however, I am aware that even under the most optimistic of estimates I have fewer reading years left than otherwise. There is also the consideration of space. I don’t have room for what I already have and am trying to downsize my possessions. Where would I put some additional fifty-plus boxes of books? How would I even get them home, realistically? Yes, I would still admire the covers. It just wasn’t enough of a reason to do it. I accordingly walked out empty-handed, though not before calling a friend who collects old Nick Carter books to see if there was anything he could use (he laughed and told me that he had a complete run of them).  I do have to admit that I tried to cajole the caregiver’s contact information out of the bookstore clerk, given that I was curious about that material that the store didn’t buy. He laughed but would not tell me. It’s just as well.

I wasn’t a dollar short but I was two or three decades too late. It’s okay. Everything happens for a reason, including a situation where you have the opportunity to wisely walk away from a temptation that, like most temptations, is more trouble than its worth. I still find myself intermittently thinking about those boxes full of books, however, the way you might think of a stranger who you encountered and found attractive but who kissed your cheek and said, “I’m trouble. Bye” before walking away, never to be seen again. Still, I occasionally wonder what I would have done should I have had some of those revolving wire racks at home. 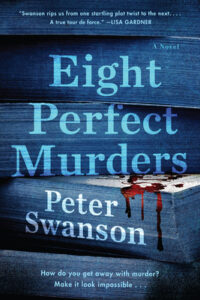 But wait, there’s more. A day or so after writing the above, I read a brand new mystery novel —published this week, actually — titled Eight Perfect Murders by Peter Swanson. It is Swanson’s sixth book, and in some ways, his best. Eight Perfect Murders is a dark love letter to the mystery genre, used bookstores, and readers. The book, which you really should read, in part concerns a bookseller who compiles a list of eight classic mystery novels,  each of which features a murderer who gets away with “it.” I was brought up short by one of the books which made the list of the character in Swanson’s novel. It was The Drowner, an all but unknown stand-alone work by John D. MacDonald. A character named Travis McGee brought MacDonald fame and fortune, but he wrote a number of other books of lesser note as well. Indeed, when I was standing in that used bookstore trying to decide whether to buy those boxes, it was the presence of The Drowner, with which I was unfamiliar, among those rows and rows of all-but-forgotten books that almost — almost — tipped me over to the dark side. When I saw it on that fictional bookseller’s list in Eight Perfect Murders I felt my world tilt on its axis for just a moment. Maybe I should have bought those books. If so, I’ll chalk it up to a long list of mistakes and keep moving forward. 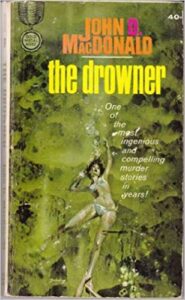 That’s it, my friends, for me and for now. Be well.