My friend Becca Puglisi is here today with a fab post about how to use conflict and tension effectively. Enjoy!

One of my favorite Aha moments as a writer came in the form of feedback from a critiquer. (Shout out to all the critique partners!) She kept writing notes in my manuscript, like Where’s the tension? and This would be a good spot to add some tension.

No tension? What’s she talking about? The main character was just abandoned by her father. Her best friend was attacked by racist pigs. The family business is about to go under. I mean, there is conflict ALL OVER the place, so how can she say there’s no tension??

After chewing on this for a while, I realized that I was confusing tension with conflict. Although the terms are often used interchangeably, they aren’t necessarily the same.

Blake Snyder (Save The Cat) defines conflict like this: a character enters a scene with a goal, and standing in the way is an obstacle. That’s conflict. Maybe it’s a confrontation with an adversary, a downed tree that blocks the character’s path, the alarm not going off on the morning of an important meeting, or a temptation that triggers an internal struggle.

Conflict is whatever makes it harder for the character to achieve their goal. It’s a vital part of creating empathy in the reader as they wonder if the hero is up to the challenge.

Tension in literature is an emotional response from the reader, and conflict is one of the things that elicits it. Think of it in terms of real-life tension—that tight, stretched feeling in your belly that puts you on edge. Where conflict occurs, the character should be feeling some of that tension. If the reader feels it too, an emotional bond is forged that puts the reader more firmly in the character’s corner, rooting for them and turning pages to see if they succeed.

When conflict is done right, it should result in tension. But it doesn’t—not all the time, as my critique partner kindly pointed out. So how do we write stories that are chock full of tension? Here are four tips for making that happen.

Include Conflict in Every Scene. In each scene, your character should have a goal. If they get what they want without any opposition, where’s the fun (or tension) in that? Too many pages without conflict will result in a story that drags and readers who start wondering what’s in the fridge.

So for each scene, know what your character’s after, then add whatever will make it more difficult for them to achieve their goal. The conflict can be big and noisy (a fistfight) or quiet (the character wanting something that’s bad for them), but make sure it’s there. For ideas on possible conflict scenarios, take a look at this database at One Stop for Writers.

Employ a Variety of Conflict Scenarios. Think over the past day and take a quick inventory of all the difficulties you encountered. The list is going to be impressive (and maybe a little overwhelming). It’s going to include not only conflict of varying intensity, but scenarios that touch on different areas of life. The same should be true for our characters. Your spy protagonist is going to have lots of work-related conflict, but they’re also going to encounter relationship friction, moral temptations, power struggles, ticking clock situations, etc. Well-rounded characters should experience conflict in all areas of life. Maintain authenticity (and make things super difficult for them) by varying the conflict scenarios in your story.

Add Some Internal Conflict. While there always will be external forces working against your character, any protagonist traversing a change or failed character arc is going to struggle internally. As the story goes along, they’ll face difficulties that highlight a weakness, challenge a dysfunctional coping mechanism or flawed ideology, and push them to make the changes that will allow them to succeed. The only way they can reach that critical tipping point of meaningful change is if they struggle with their inner demons.

It’s Sarah Connor doubting her ability to become “the mother of the future.”

It’s Jason Bourne slowly realizing who he is, not knowing if he can live with the knowledge, and being unsure how to move forward.

It’s John Anderton—cop and neuroin addict—wrestling with the knowledge that the Pre-Crime program he’s devoted his career to may be flawed and even immoral.

Internal conflict is compelling to readers because they’ve been there—wrestling with questions about morality, right and wrong, identity, and a host of other things. They also know what’s at stake for the character should they fail to emerge from those internal struggles with a healthier approach to life.

Make Sure the Stakes are High Enough. We know that conflict doesn’t always result in tension, which means it won’t automatically engage readers. For readers to be unsettled and a little nervous about your character’s future, something significant needs to be at stake: a cost incurred if the protagonist fails to navigate the situation successfully.

So when you’re thinking of the consequences of failure, think in terms of stakes. Each conflict scenario needs a serious or else attached to it. To identify stakes that will greatly impact the character, consider the following:

Stakes—even the far-reaching ones—should touch your character on some level. This gives them skin in the game by making things personal and endangering something or someone important. When the reader sees just how high the stakes are, their empathy for the character will grow, and they’ll be more engaged in the story.

We try to avoid tension in real life, but in our books? It’s absolutely vital for holding the reader’s interest. Create and maintain tension by carefully considering the conflicts in your story. Include opposition in every scene, vary the kinds of conflict your character experiences, add some internal struggles, and ensure that the stakes are impactful and you’re sure to raise your character’s blood pressure while keeping readers engaged. 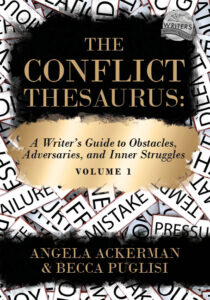 For more information on the role conflict plays in storytelling and how you can use it effectively, check out The Conflict Thesaurus: A Writer’s Guide to Obstacles, Adversaries, and Inner Struggles (Volume 1). 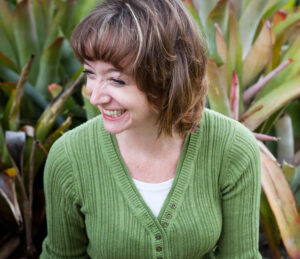 Becca Puglisi is an international speaker, writing coach, and bestselling author of The Emotion Thesaurus and other resources for writers.

Her books have sold over 700,000 copies and are available in multiple languages, are sourced by US universities, and are used by novelists, screenwriters, editors, and psychologists around the world. She is passionate about learning and sharing her knowledge with others through her Writers Helping Writers blog and via One Stop For Writers—a powerhouse online resource for authors that’s home to the Character Builder and Storyteller’s Roadmap tools.