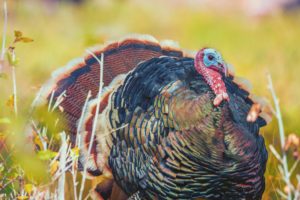 Photo by Andrea Reiman on Unsplash

Clare’s recent post got me thinking about craft and how, as we write, the story inflates like a Tom turkey. If you think about it long enough and throw in a looming deadline, Tom Turkey and story structure have a lot in common.

Stay with me. I promise it’ll make sense, but I will ask you to take one small leap of faith — I need you to picture Tom Turkey as the sum of his parts, constructed by craft. And yes, this particular light bulb blazed on over the Thanksgiving holiday. We are now having spiral ham for Christmas dinner. 🙂

Broken into four equal parts, 25% percent each, we call this the dramatic arc and it defines the pace of our story.

Characterization adds meat to his bones and interesting, conflict-driven sub-plots supply tendons and ligaments. When we layer in dramatic tension in the form of a need, goal, quest, or challenge, Tom grows skin. Obstacle after obstacle, conflict after conflict, he sprouts feathers. Utilizing MRUs — Motivation-Reaction-Units; for every action there’s a reaction — sets our story rhythm. They also aid us in heightening and maintaining suspense.

When we use MRUs, Tom Turkey fluffs those feathers. Look what happened. He grew a beak.

Providing a vicarious experience, our emotions splashed across the page, makes Tom fan his tail-feathers. The stakes add to Tom’s glee, and he prances for a potential mate. He thinks he’s got the goods to score with the ladies. He may actually get lucky this year.

Then again, we know better. Poor Tom, he’s still missing a few crucial elements in order to close the deal.

By structuring our scenes, Tom grew an impressive snood. See it dangling from his beak? The wattle under his chin needs help though. Hens are shallow. Quick, we need to imbue the story with voice.

Uh-oh. Joe Hunter leveled his shotgun at Tom. We can’t let him die before he finds a mate. We need to ensure he stays alive. But how? We’ve given him all the tools he needs, right? 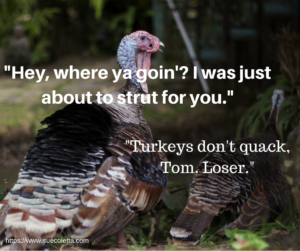 Did we choose the right point of view to tell our story? If we didn’t, Tom could end up on a holiday table surrounded by drooling humans in bibs. In other words, we’ll lose our reader before we even get a chance to dazzle them with Tom’s perfect structure.

We also need narrative structure. Without it, Joe Hunter will murder poor Tom. We can’t let that happen!

Narrative structure, by the way, is almost impossible for me to define (maybe one of our craft teachers will weigh in here). I call it the “oomph” and I know it when I write it. I also know when it’s missing. Have you ever started writing a story but it didn’t have that certain something? The story was just … meh. There’s nothing inherently wrong with it, but it didn’t sizzle like it should for some reason.

Yeah, so have I. Those novels are now trunked. Without the oomph, the story doesn’t work. We need the oomph — aka narrative structure.

Tom needs narrative structure, too, if he hopes to escape Joe Hunter’s bullet. He also requires wings, in the form of context. Did we veer too far outside of our readers’ expectations for the genre we’re writing in? Did we give Tom a heart and soul by subtly infusing our theme? Can we boil down the plot to its core story, Tom’s innards? What about dialogue? Does Tom gobble or quack?

Have we shown the three dimensions of character in order to add oxygen to Tom’s lungs? You wouldn’t want to be responsible for suffocating Tom to death, would you?

Lastly, Tom needs a way to wow the ladies. We better make sure our prose sings. If we don’t, Tom could die of loneliness. Do we really want that on our conscience? No! To be safe, let’s review our word choices, sentence variations, paragraphing, grammar, and the way we string words together to ensure Tom lives a full and fruitful life. Don’t forget to rewrite and edit. If readers love Tom, he and his new bride could bring chicks (sequels or prequels) into the world, and we, as Tom’s creator, have the honor of helping them flourish into full-fledged turkeys.

Aww … it looks like Tom’s story will have a happy ending after all.

Over to you, TKZers. Is Tom Turkey missing anything? What would you name his mate?Can anyone define narrative structure in a more craft-appropriate way?

Want to meet more feathered friends? The antagonist in BLESSED MAYHEM has three pet crows, Poe, Allan, and Edgar. The Kindle version is on sale for a limited time. 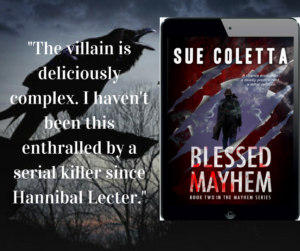 22 thoughts on “What Do Tom Turkey and Writing Have in Common?”