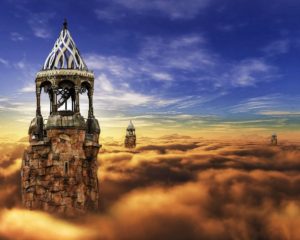 We have a first-page critique today, from which I want to draw a lesson about intimacy in Point of View, especially in epic fantasy novels. Here’s the clip:

Back arched, pointed ears swept backwards, Archenon knelt before the High Queen in the Great Hall of Êvina.

“Please—I beg you. Let me go.” An intricate braid of ebony hair lay heavy along his spine. The piece of parchment crunched between his hands, folded and read so many times that it had begun to crumble.

The High Queen of Aradria, his mentor Rhonja, looked down on him. “You know I can not.” She smoothed out a fold on her silky dress, which was fitted to perfection. It hugged her slender form, mirroring the blinding hall in its purity. Her hair, shining like starlight, wafted about her shoulders.

His imploring emerald eyes met hers from the bottom of the crescent staircase leading up to the white throne. A vast mosaic of Her Majesty’s Royal Crest lay fixed in the wall behind her—four petals aligned to the cardinal points held each other under the protection of a circle representing Spirit, the High Queen’s element.

Archenon swallowed hard. “I have given you my life, and now the last tie to my heritage is to be torn away. Is there nothing I can say to make you change your mind? I want to see my mother one final time.”

Rhonja had never reciprocated Archenon’s feelings, but he thought she cared for him enough to allow this one request. She was the epitome of hope for her subjects, yet she would crush his.

“Of course. I treasure you,” she replied, her brilliant gaze a calm ocean at twilight. But her words were scant comfort.

Shafts of light pierced between the half-drawn purple drapes hanging over the arched windows. Elegant pillars of creatures, cunningly carved, held up the vaulted ceiling. Gryphons, mermians, dragons, elves and other beings stared at him with marble eyes. It was as if they fought to keep the very building from crashing down on him. More than ever, the immensity of the white hall felt intrusive and distinctly foreign.

Archenon was afraid he would never belong anywhere. Not here, in this land where the trees were few and the ocean lapped around every edge of the border. Not even in his first home, deep in the woods of Elfen Harrows, in the realm of fire. Not an easy thing for an elf to admit, and he shivered with a sudden fear.

The genre here appears to be epic fantasy, so I’ll be making my remarks based on that assumption. The excerpt has a rich style (which we’ll discuss in a moment) and what I like about it is that everything is woven into an immediate scene, with great tension–a disturbance, which is the best way to hook a reader from the start. I’ve seen too many manuscripts of this type that begin with some meandering journey down a mountain, through a valley, or on a horse. Nothing much happens as the world is built. I like this author’s approach much better.

So let’s talk about how to render this approach as effective as possible.

The first four paragraphs are Omniscient POV. You can tell because the author describes things that the main character, Archenon, cannot see. He cannot see his own ears, his ebony hair, or his imploring emerald eyes. It’s only when he swallows hard, and we get a glimpse of his thoughts, that we move into the more intimate Third Person.

My main suggestion is that the author render the entire section in Third Person POV. That will create more empathy, more connection, between reader and character. No matter the genre, we want to do everything in our writerly power to deepen the reader-character bond. I don’t see a reason to keep distant via Omniscience.

Let me quickly add that in epics I do think Omniscient POV can be well utilized, but it’s usually when the author describes setting (world building) or recounts a history. I also recognize that epic fantasy fans are tolerant of long passages of Omniscient-style narrative. But for those of you contemplating that style, my suggestion remains: set us first inside a character, and then do the building. This is what James Clavell does in the opening pages of Shogun. He gives us some history and description and context but only does so after this gripping opening line: The gale tore at him and he felt its bite deep within and he knew that if they did not make landfall in three days they would all be dead.

Now we’re set. We’re inside a character. And when Clavell recounts historical detail, we get the impression it is coming from the protagonist’s own knowledge.

So, author, can you get us into Archenon with more immediate, sensory, deeply-felt detail? I think you can!

Let’s take a look at this paragraph:

Shafts of light pierced between the half-drawn purple drapes hanging over the arched windows. Elegant pillars of creatures, cunningly carved, held up the vaulted ceiling. Gryphons, mermians, dragons, elves and other beings stared at him with marble eyes. It was as if they fought to keep the very building from crashing down on him.

Notice that we don’t get the POV clue until the middle, with stared at him. See how that keeps us at a bit of a distance? These little things add up. Instead, do something like this:

Archenon winced at the shafts of light piercing the half-drawn purple drapes having over the arched windows. He averted his gaze to the elegant pillars …

Let me suggest you go through your entire manuscript looking to make the POV more intimate. Watch for paragraphs the open without a POV clue in it.

I do think the author has an innate handle on fantasy style. It’s rich and evocative. I liked a lot of it.

One suggestion I do have is to look over every description and make the tone consistent with the feeling you want in the scene. For example, these lines: Gryphons, mermians, dragons, elves and other beings stared at him with marble eyes. It was as if they fought to keep the very building from crashing down on him. More than ever, the immensity of the white hall felt intrusive and distinctly foreign.

Look how the sentence in the middle works against the other two. Rather than fighting to keep the building up, try: It was as if they were waiting for the right moment to bring the building crashing down upon him.

That way the sentence adds to the menace of the scene, rather than relieving it.

Also––and I only mention this because it’s the very first sentence––I was thrown off by the pointed ears swept backwards. It’s a jarring image. If they are sweeping backwards, that’s one big set of ears! I know it turns out Archenon is an elf, but we can wait for that information. (You could insert a bit about Archenon feeling the heat in the points of his ears…)

These are the sorts of things you pick up when you revise. I’ll say again, this is a good foundation––an actual scene and a rich style. Make it more intimate and I’ll want to keep reading.

Your turn, TKZers. What did you think?

17 thoughts on “Epic Intimacy and Point of View”