Another brave writer submitted their first page for critique. Enjoy. I’ll catch you on the flipside. 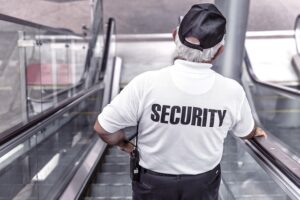 It was the other buildings that looked sinister. They slumped against each other, lining the alley in ancient, faded red-brick. Their boarded-up windows bothered Joe the most. They made the buildings look blinded. February chill, boosted by the river, let him hurry past those dead old things, still hanging round like they didn’t know their time had come and gone.

He could hear the Felbrigg changing from a warehouse to an apartment-building before he saw it. And there it was, full of life, construction crews hammering and buzzing, wraparound floor-to-ceiling windows, fancy new glass door. Fitting into the London of now.

Greeley, the building manager, took off his reading glasses and nodded to the two construction guys coming up the corridor where the gym and lift were going to be. The men headed for the front door. This desk station and security room made an island in the middle of the reception floor. A corridor ran all the way to the back of the building, on both sides of the island. Greeley had already run through the CCTV system in the security room, and how to change the recording. The security technology at the desk station was more or less the same. Greeley had explained about the alarm, the keys, the touchpads, the drawer contents.

Greeley looked Joe over with down-sloping grey eyes for about the fifth time. Joe knew the sight he made, six-foot-three, the extra muscle he’d put on, and his entire past in his face. Good look for a security guard; not so good, otherwise, to men like Greeley.

Now the men working on the gym had gone, he could hear Greeley’s nasal voice better through all the banging and drilling.

Greeley’s wide, soft jaw settled back into his neck. He said, “So. Think you can remember all that?”

The way Anon set the scene in the first two paragraphs works for this particular reader. We know where we are, and I found the dinginess of the building compelling enough to keep reading. The first line implies something terrible is about to happen within said building. Which is great. Could the sentence be stronger? Yeah, but that’s an editorial nitpick. I’d rather focus on the big picture.

The largest concern for me occurs after the hashmark. We have a couple POV hiccups and a distant narrator. A hashmark indicates a new scene, yet we’re in the same building as the previous paragraphs. See my confusion? At first, I thought we’d switched to Greeley’s POV, but it doesn’t appear that way.

Anon, if you meant to switch to a different POV, then we have an even bigger problem. The first page should only be one scene. One POV per scene.

Everything after the hashmark is more world-building. There’s also a lot of telling. Whenever we use words like heard, saw, thought, knew, etc., we’re not showing the story in a deep point of view. Think about how you, the writer, views the world. For all intents and purposes, you are that POV character. So, rather than tell us you heard or saw something, show us.

Example of telling (limited POV): I heard waves crashing against the rocks. I saw the salt water slash through the veil of ivory foam.

Without adding to the imagery, here’s the same example, only this time we’re in deep POV (showing): Waves crashed against the rocks, the salt water slashing through the veil of ivory foam.

See the difference? You don’t need to tell the reader that the character heard or saw the waves. It’s implied. How else would s/he know?

Okay, there’s another problem. Everything after the hashmark isn’t interesting enough to carry the first page. The building is under construction. We get it. Move on. Don’t waste precious real estate by over-describing. If you want to include the debris, then sprinkle it in later.

I recently finished a terrific thriller entitled A Killer’s Mind by Mike Omer. Let’s look at the first paragraph as an example of how to include all of the above by showing, not telling …

The sharp scent of formaldehyde filled the room as he poured the liquid into the mixture. He had hated the smell at first. But he’d learned to appreciate it, knowing what it represented: eternity. The embalming fluid kept things from deteriorating. “Till death do us part” was an unambitious concept at best. True love should ascend beyond that point.

Did this paragraph raise story questions in my mind? Absolutely! I wanted needed to find out who this killer was embalming.

Did it pique my interest? Absolutely! I wanted needed to find out what this killer might do next.

Did it introduce a character in a compelling way? Absolutely! I wanted needed to find out more about this killer.

Did I know the genre right away? Absolutely! It’s a serial killer thriller.

Did I have empathy for the villain? Yes! He’s looking for love and thinks the only way to keep Mrs. Right is by embalming her.

Does the villain have a goal? Absolutely! His goal is to build a life-long union with a woman who will never leave him.

And Omer accomplished all of it in one paragraph. Bam. I’m hooked! The rest of the first page drew me in even more. Powerless to fight the urge to stop reading, the world faded away as I frantically flipped pages like a junkie searching for a fix.

Check out the rest of the first page …

He added more salt than the last time, hoping for better results. It was a delicate balance; he’d learned that the hard way. The embalming fluid promised eternity, but the saline solution added flexibility.

A good relationship had to be flexible.

There was a creak beyond the locked door. The noises—a series of irregular squeaking and scraping sounds, intermingled with the girl’s labored groans—grated on his nerves. She was trying to untie herself again. Always moving, always trying to get away from him—they were all the same at first. But she’d change; he would make sure of that. There would be no more incessant movement, no muffled begging, no hoarse screams.

She would be quiet and still. And then they would learn to love each other.

Notice, too, how the killer is moving; he’s active. We’re not hearing about what he did after the fact. We’re experiencing it firsthand through the killer’s POV.

Anon, you need to do the same in your first page. Show us where Joe goes after he enters the building and why we should care. You don’t need to reveal any big mystery, but you do need to hint at it to hold our interest.

This next paragraph tells us what happened instead of letting us experience it ourselves:

Greeley had already run through the CCTV system in the security room, and how to change the recording. The security technology at the desk station was more or less the same. Greeley had explained about the alarm, the keys, the touchpads, the drawer contents.

Granted, it’s best to breeze over the boring stuff. We don’t need to know how to operate CCTV, unless it impacts the plot in some way. If the paragraph falls into the boring stuff category, then it doesn’t belong on the first page.

What if Joe reviews last night’s tapes and sees something strange … a burglar, someone being kidnapped, UFO lights, whatever fits your genre. He shows the footage to Greeley and we’re off and running with a new mystery, a goal for our hero, and intrigue.

What if Greeley storms over to Joe’s work station with damning footage of Joe sneaking into the building last night. But Joe was at home all night. See all the story questions that might arise from that one simple action? Is someone trying to setup Joe? For what, burglary, murder, or a far more sinister scheme? Who hates him enough to frame him? And why? How’d he or she get his passcode or security card?

With the right action, it’s easy to plant questions in the reader’s mind. But you do need the right angle. We also need to plant the reader in that moment with the hero or villain, rather than the narrator telling us about it after it happened.

This paragraph confused me:

Greeley looked Joe over with down-sloping grey eyes for about the fifth time. Joe knew the sight he made, six-foot-three, the extra muscle he’d put on, and his entire past in his face. Good look for a security guard; not so good, otherwise, to men like Greeley.

I’m guessing Anon’s trying to describe Joe, but it doesn’t work. Some authors never describe their characters. They leave it up to reader-interpretation. On Facebook, a fan asked Karin Slaughter what one of her main characters looked like. Her response? He looks exactly how you picture him in your mind. Perfect answer, right?

The writer needs to know their characters intimately, including their looks, but the reader doesn’t, unless their unique style adds to their character in some way. For example, some of my characters wrongly assume Shawnee Daniels lives a gothic lifestyle. She hates the label, but I show her uniqueness to enhance her character — dressing goth-like raises questions about her. Is she hiding behind all black for a reason? Is she using makeup like a mask to shield the innocent girl who cowers inside? See where I’m going with this?

Greeley has that bulldog look. Great. Let another character tease him about his downward-sloping eyes. Men give each other s*it all the time on construction sites. Show him getting razzed by one of the guys, and then show his reaction to the ribbing. Does he fire the guy on the spot? Does he throw things? Cry? I wouldn’t let this play out on the first page, though. Just spitballin’. 😉

Anon, I see something special in the first two paragraphs. You have the writing chops to make this first page compelling. You just dropped the ball after the hashmark. Happens to the best of us. So, take a moment to curse me out, then get back to work. Make us proud, because I know you have it in you.

Favorite line of this first page: Greeley’s wide, soft jaw settled back into his neck.

You nailed the body cue in that line. So, stop playing it safe elsewhere. 🙂

Over to you, TKZers. How might you improve this first page? Did the first two paragraphs draw you in? Could you guess the genre from this small sample? What’s your favorite line? Which, if you’re game, I’d like to include in all first page critiques. Not only will asking for a favorite line add a positive spin to the critiques but knowing where the brave writer succeeded is just as beneficial as knowing where s/he went wrong.