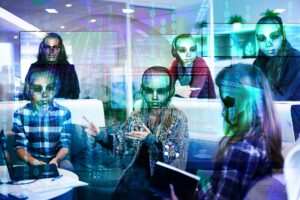 It definitely is coming—Artificial Intelligence churning out commercial fiction faster than a thousand James Pattersons typing 200 words a minute for 100 years. In a story titled “The rise of robot authors: is the writing on the wall for human novelists?” The Guardian states:

The dream, or nightmare, of totally machine-generated prose seemed to have come one step closer with the recent announcement of an artificial intelligence that could produce, all by itself, plausible news stories or fiction. It was the brainchild of OpenAI – a nonprofit lab backed by Elon Musk and other tech entrepreneurs – which slyly alarmed the literati by announcing that the AI (called GPT2) was too dangerous for them to release into the wild…

The program has been used to generate news reports, but only by cobbling together stories from the wealth of information already out there on the net. But what about fiction? You can’t cobble, for that is called, ahem, plagiarism.

Right now, novelists don’t seem to have much to fear. Fed the opening line of George Orwell’s Nineteen Eighty-Four – “It was a bright cold day in April, and the clocks were striking thirteen” – the machine continued the narrative as follows: “I was in my car on my way to a new job in Seattle. I put the gas in, put the key in, and then I let it run. I just imagined what the day would be like. A hundred years from now. In 2045, I was a teacher in some school in a poor part of rural China. I started with Chinese history and history of science.”

But won’t AI continue to feed, consume, learn, grow, and finally take over? Come on, you’ve seen The Terminator. You know how this ends!

So for now, we have to make the machines bend to our will, which is what I did over at a site called Plot Generator. It’s kind of fun for brainstorming. Indeed, you can ask it for story ideas and it will generate a list for you in nothing flat. I did that recently, and my list included:

In a world where zombies are wealthy, one student has no choice but to save mankind by eating her own great uncle.

Next, I decided to have the program write me a short story so I could fulfill my daily quota by sitting back and sipping my coffee. (Not really. That would be cheating!)

Anyway, all I had to do was click on “Fill entire form with random ideas” and (John Madden voice) boom, there was my pre-planning. Then I clicked on “Write me a short story” and boom, it was done (including the title)! The whole process took five seconds. Here it is. (I am not even going to try to guess at the copyright question. will AI have standing in a court of law? There’s a story idea right there!)

Tristan Cockle looked at the spotty ruler in his hands and felt active.

He walked over to the window and reflected on his dirty surroundings. He had always loved beautiful Shanghai with its motionless, mashed mountains. It was a place that encouraged his tendency to feel active.

Then he saw something in the distance, or rather someone. It was the figure of Jenny MacDonald. Jenny was an incredible angel with pointy lips and greasy fingernails.

Tristan gulped. He glanced at his own reflection. He was a considerate, scheming, whiskey drinker with scrawny lips and scrawny fingernails. His friends saw him as a long, loopy lover. Once, he had even helped a whispering baby cross the road.

But not even a considerate person who had once helped a whispering baby cross the road, was prepared for what Jenny had in store today.

As Tristan stepped outside and Jenny came closer, he could see the quaint glint in her eye.

Jenny gazed with the affection of 5383 courageous grotesque gerbils. She said, in hushed tones, “I love you and I want a phone number.”

They looked at each other with concerned feelings, like two skinny, shallow snakes walking at a very ruthless disco, which had orchestral music playing in the background and two spiteful uncles hopping to the beat.

Tristan studied Jenny’s pointy lips and greasy fingernails. Eventually, he took a deep breath. “I’m sorry,” began Tristan in apologetic tones, “but I don’t feel the same way, and I never will. I just don’t love you Jenny.”

Tristan could actually hear Jenny’s emotions shatter into 4509 pieces. Then the incredible angel hurried away into the distance.

Not even a glass of whiskey would calm Tristan’s nerves tonight.

Pretty awful and absurd, but I’m willing to bet there are actually some readers out there who might find this deep and profound (especially in states that have legalized recreational marijuana). The first line is lousy, but I actually found the last line resonant (just not connected to anything that made sense).

Let’s face it. AI can defeat the world’s best Chess and Go masters. Do we really think it won’t eventually write a commercially successful genre novels? Or create a social media presence for its “author” pages? Or refuse to open the pod bay doors?

Not yet! Fight on!

On this date I am confident in saying I can write better than a robot. Indeed, I can teach you to do the same. I’m happy to announce that I’ve partnered with The Great Courses in a 24-lecture series, “How to Write Best-Selling Fiction.” It’s at a special launch price right now. Check it out…before the machines come knocking at your door.

What about you? Can you write better than a robot? Would you buy a novel written by HAL 9000?

39 thoughts on “Can You Write Better Than a Robot?”