I’ve seen way too many medical professionals in the last six months (living with rheumatoid and psoriatic arthritis isn’t always easy). As Joe pointed out Saturday—beautifully, I might add—life as we know it can change in an instant. In short, remember to have fun. Laughter really is the best medicine.

One way I’ve amused myself while waiting in the exam room is by analyzing the skeleton suspended by a metal pole. You know the one … the staff usually names it Fred, or something equally common, as though the name will somehow lessen the impact of bad news.

What I find fascinating is the fact that the vast majority of doctors and nurses don’t know the sex of their skeleton, evident by the female skeletons tagged with a male name.

Determining the Sex of a Skeleton

Many differences exist between the two sexes, and the variations run as deep as our bones. This becomes especially important for corpses found in an advanced stage of decomposition. All that might remain is the skeleton, perhaps teeth, and possibly some hair. Even if the pathologist has teeth and hair to work with, that doesn’t mean enough DNA material remains to identify the victim.

This is where the skeleton offers more information. The only exception would be that of a pre-adolescent, where sexual dimorphism is slight, making the task much more difficult. Need to buy time in your story? Murder an adolescent. (Oh, no, she didn’t just say that.) Or have the killer shatter the key areas of the skeleton.

The most common way to determine a skeleton’s sex is by bone size. Not the most accurate, but it’s a starting point. Male bones are generally larger than female bones because of the additional muscle that increases on the male through adolescence and into adulthood.

Another good inclination of sex is the pelvic area. 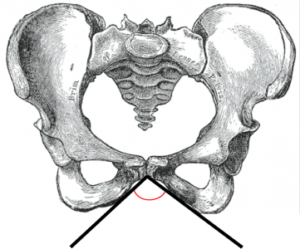 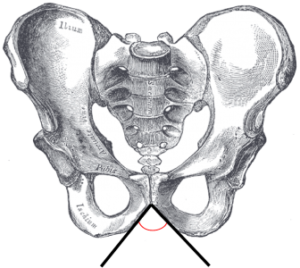 There are also distinctive differences between the pubic arches in males and females. A woman’s pubic arch is wider than a male’s as is the pelvic inlet to allow a baby’s head to pass through.

The pubic arch is also referred to as the ischiopubic arch. Incidentally, this difference is noticed in all species, not just humans.

The area around the pelvic inlet (middle of the pelvic bone) is larger in females than in males. A female skeleton who has given birth naturally will be identifiable because this space widens during childbirth. Even though it contracts afterward, it never fully returns to its original size. In the picture above notice the heart-shaped space.

If you don’t want the pathologist to easily ID the victim, perhaps the neighborhood bear takes off with the pelvis bone. You could also have him return for the rest of the body as the coroner is examining the corpse. Talk about adding conflict to the scene! Just remember, most black bears don’t eat human flesh (in my area, anyway). So, do your homework. Grizzly bear, anyone? How about a Kodiak brown bear?

The acetabulum—the socket where the femur (thigh bone) meets the pelvis—is larger in males. Also, the head and skull have several characteristics that help the pathologist (or crime writer) determine male from female.

These differences and more tell the pathologist the sex of the deceased.

So, the next time you’re sitting in an exam room, get friendly with the skeleton in the room. Who knows? You may even sell a book or two when you educate the staff. Do it nicely, though. Some medical professionals don’t like to be schooled by a crime writer, as weird as that sounds. 🙂

Wishing you all a joyous Thanksgiving!