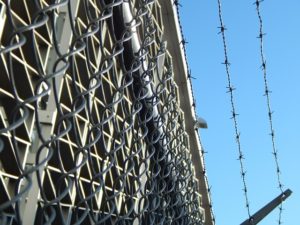 Captain Martin Beyer wondered in alarm how he could save his friend’s life. His friend, Second Lieutenant Hans Fritz, was in danger of being shot. He had stepped to the caution line and put one foot on the other side. The caution line, marked with wooden stakes and a strand of wire across the top, warned the prisoners of war from getting too close to the wire fence fifteen feet beyond. On the fence going around the entire prison camp there were signs in English and German that read:

Forbidden to Move Inside

Violators Will be Shot

The American guard in the corner watchtower shouted, “You there! On the deadline! Git back!” The guard raised a rifle to his shoulder. “I said git back!”

“You damn Nazi,” the guard yelled at Fritz. “Git back or I shoot!”

Fritz still didn’t move, apparently not taking the threat seriously. Or caring. But Beyer took it seriously. He cared.

Returning to his barracks after doing his morning toilet, Beyer now stood still, uneasy. Then he heard the click of a breech bolt coming from the guard tower at the other corner of the compound. In horror he saw a guard hunkered behind a machine gun. He was covering the south end of the compound as if at any moment there might be a general uprising. The nearby prisoners, however, remained still and only stared.

But Beyer had to do something other than stare to see how the crisis would turn out. He couldn’t afford to lose Fritz. The only mining engineer in the Officers Compound, Fritz was essential to the success of Hermes. Beyer was desperate for Hermes to succeed. Being too long cooped in the densely packed prisoners and buildings of the enclosure, Beyer, much like Fritz, was becoming unnerved. Beyer frequently broke out in night sweats, his breathing rapid and shallow, and sigh a low, agonizing moan.

Considering that Fritz might be shot, a shiver of fear raced through Beyer at the prospect of a catastrophe. Without Fritz there may not be a tunnel completion, no one would get out, all the hard work done up to now remaining unfulfilled.

“Damn you! Stop!” the guard with the rifle shouted.

The shout startled Beyer, then he noticed Fritz beginning to take mincing steps, his short height straddling the wire in his crotch.

Okay, let’s get to work.

Usually first pages arrive naked and unadorned at TKZ, without genre or background information. Page One must stand entirely on its own. That’s good because a strong first page is critical to whether or not a reader buys your book.

However, this submission included a synopsis. And the synopsis was intriguing. For that reason, I’m going to handle this critique a little differently than normal.

Most writers would rather endure an IRS audit than write a synopsis because it’s damn hard to do well.

In the summary, Anon explained the novel was based on a true but largely-unknown incident during World War II at Camp Trinidad in Colorado. I Googled it and found this article. Essentially, The Great Escape got turned on its head with German prisoners of war trying to escape American captors.

Show, don’t tell is oft-repeated advice for fiction. However in a synopsis, telling is permissible because it’s the most efficient way to introduce characters, lay out the story problem/conflict, and set up what’s at stake.

Anon handled that summary very well. German prisoners plot to escape a POW camp in Colorado because they are going mad from wire enclosure fever. A main character, Beyer, would rather die than endure another day in captivity. But there is dissent among prisoners, some of whom are die-hard Nazis while others are not. There are additional complications because Beyer’s friend Fritz, the chief engineer in charge of building the escape tunnel, is teetering on the brink of insanity. Anon sets up external conflict between German prisoners and American captors and among the POWs themselves, internal conflict with severe psychological stress, and a ticking clock with a race to see if the tunnel can be finished before the engineer completely loses it.

Lots of great potential for a historical thriller. Congratulations on a clear, competent synopsis, Anon.

Unfortunately, on this first page, Anon is mostly telling when s/he should be showing.

The POV character Beyer observes the events unfolding not only from a physical distance but also an emotional distance. Anon tells us he’s concerned but the reader doesn’t feel his apprehension, his helplessness, his panic that Fritz’s actions may not only lead to his death but also ruin the escape plan that can’t proceed without him.

The stakes couldn’t be higher–life or death–which is a great way to kick off a first page.

But the problem is: the reader doesn’t care.

Because we’re not inside Beyer’s skin. We don’t feel his guts churning, smell the nervous sweat under his armpits, taste the bile rising in his throat. We don’t see what he sees—the madness in the wild eyes of his friend Fritz who’s trying to commit suicide. We don’t hear the angry bark of the guard with his twitchy finger on the trigger.

We don’t feel the urgency driving both men to risk death because they can’t endure another day in captivity.

Showing is more than visual—it must be visceral and emotional.

The synopsis used the term “wire enclosure fever.” Unfortunately there is no sense of  fever in this first page.

A few suggestions to consider as you rewrite:

Lead off with a simple dateline that immediately sets the date and location. The reader right away understands this is historical fiction set in a military environment. For example:

Next, climb inside Beyer’s skin and stay there. Use sensory detail to bring action to life. Actions trigger Beyer’s thoughts and feelings.

A lot of repetition can be cut and condensed. Consider the first two sentences:

Captain Martin Beyer wondered in alarm how he could save his friend’s life. His friend, Second Lieutenant Hans Fritz, was in danger of being shot.

These two sentences essentially repeat the same information that could be combined into a single sentence with much more punch. Again, it’s telling rather than showing. Instead of having Beyer “wonder” how to save Fritz, he should act. His action may help the situation or it may make it worse. But either way, it moves the story forward.

Every scene needs to accomplish at least five tasks:

How do you build a compelling scene? By stringing together groups of sentences that accomplish these tasks.

How do you build a compelling book? By stringing together compelling scenes.

In a fast-paced thriller, each sentence must build on the previous one to push the plot forward. Treat each sentence as a springboard that induces the reader to jump to the next sentence to learn what’s going to happen.

Below is one possible way to rewrite this first page, using additional details gleaned from the linked article.

Captain Martin Beyer fastened the last button of the drab uniform shirt that shamed him every day with its PW insignia: “prisoner of war.” He stomped his feet on the wood steps of the officers barracks to knock the fine silt off his once-shiny Luftwaffe boots. Barbed wire surrounded this desolate, barren patch of dirt named Camp Trinity. On the fence, signs in German and English warned that anyone would be shot if they crossed the caution line, the restricted buffer zone that was fifteen feet inside the compound fence.

The shout from the watchtower caught Beyer’s attention. He turned to see an American guard aiming a rifle at Beyer’s closest friend in the camp, Hans Fritz. The young second lieutenant had stepped beyond a wire stretched taut between wooden posts.

One foot over the caution line into the restricted zone.

Beyer’s gut cramped as he prayed his friend would heed the guard’s warning. Lately, he never knew if Fritz taunted the Americans for sport or if he truly sought death rather than endure another day inside the prison.

There was a wild gleam in Fritz’s wide blue eyes as he teetered on the line, one boot in life, the other in hell.

The metallic click of a breech bolt sounded from the opposite watchtower where another guard hunkered behind a machine gun. “Git back or I’ll shoot!”

“Don’t do it, Fritz,” Beyer muttered. If Fritz died, the escape tunnel plan died with him.

The above is about 230 words and conveys most of the same information more concisely plus gives a deeper glimpse into the POV character.

Work on sensory detail that draws the reader in. Let the reader see, hear, smell, taste, and touch the story world you’ve built.

Work on showing emotion and feelings in the POV character. It’s not enough to say he felt alarmed—show his alarm with his sensory reactions.

Examine each sentence. Ask yourself if it repeats information previously stated. If so, choose the strongest version and delete the weaker. Or combine two sentences into one.

Count how many of the five elements listed above are included in each sentence. I try to pack sentences with at least two elements, preferably more. When you compose a sentence, choose an action that reveals character as well as demonstrates the stakes. The consequences of that action either solve the problem or make it worse.

One last point: the title Heil Safari is vague and doesn’t hint at the meat of the story. “Heil” made me think of the Nazi salute so I deduced it took place during World War II. But how does that connect to “Safari”? Maybe refer to the escape tunnel to freedom. Or perhaps the perils that lie beyond the tunnel if they escape successfully. You can find a better title to convince a potential reader to click the “buy now” button.

Don’t be discouraged, Brave Author. You have a compelling storyline based on historical events that are not widely known. World War II history buffs will find this interesting. A strong foundation in fact serves as a solid platform on which to build your fictionalized version. Work on your craft and you should have a good book.

Over to you, TKZers. Suggestions and comments for our Brave Anonymous Author?

If you’re a member of Amazon Prime, you can read Debbie Burke’s bestselling thriller Instrument of the Devil for free. Here’s the link.