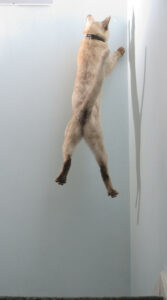 An author in search of a publisher often feels like a cat trying to catch a laser pointer. The target moves up the wall, down the stairs, sideways, backwards, and spins you around in circles. Even when you’re lucky enough to catch one (either a laser dot or a publisher), it can vanish without warning.

What’s a cat—or an author—supposed to do to keep up to speed?

In a constantly changing market, below are several recent developments affecting mystery presses:

Midnight Ink – The October, 2018 announcement that Midnight Ink would shut down came as a big shock to authors and employees alike. The respected crime fiction imprint was established in 2005. According to a Publisher’s Weekly article in November, 2018, the Minnesota-based publisher Llewellyn withdrew from the fiction market to concentrate on nonfiction, leaving MI out in the cold.

“We had good reviews, but the sales just weren’t there for [Midnight Ink],” Sanborn said, noting that the 250 backlist titles will remain in print, and that frontlist will be marketed and promoted as usual. “We’re just not accepting new manuscripts,” she said.

Twenty titles that were already in progress will be rolled out during spring/summer 2019.

Three MI editors were laid off, including Terri Bischoff, who didn’t stay unemployed for long, landing on her feet with a new gig at Crooked Lane Books. She is now Senior Editor at CLB, a crime fiction publisher founded in 2014.

“Prometheus Books sold its two genre imprints to Start Publishing. Publisher Jonathan Kurtz explained the sale by saying he wanted to return the publisher to its nonfiction roots. Prometheus expanded into fiction in 2005 with the launch of Pyr, which focuses on science fiction and fantasy novels. In 2011, it added the crime fiction imprint Seventh Street Books. Pyr has a backlist of 170 titles, and Seventh Street’s backlist stands at about 90.”

“Sourcebooks has announced that it has acquired most of the assets of Poisoned Pen Press and that the award-winning crime and mystery publisher will become Sourcebooks’ mystery imprint.”

The staff, including PP’s founder Robert Rosenwald and Editor-in-Chief Barbara Peters, will reportedly stay on and become Sourcebook employees. The offices remain in Scottsdale, AZ.

Kindle Press – The Amazon imprint stopped accepting new submissions in spring of 2018, leaving me and a hundred or so other authors orphaned.

I’ve been looking for a new house since then and have received offers from several well-known publishers like Fly-By-Night Press and No-Advances-R-Us, LLC.

Which raises the question: how does an author find a reputable house that’s likely to be in business for longer than it takes the ink to dry on the contract?

The answer is research. Vetting publishers sounds daunting but here are three shortcuts:

#1  Mystery Writers of America – MWA regularly updates their list of approved publishers. To be included on that list, a press must adhere to “professional standards of good business practice and fair treatment of authors.”

#2  Writer Beware – a great watchdog website that alerts writers to scams, cons, questionable business practices, and outright fraud. Although affiliated with Science Fiction and Fantasy Writers of America (SFWA), their investigations and warnings cover all genres. Writer Beware is the first place I research a publisher.

#3  Ask other authors – Gone are the days when an author stayed with the same house for his/her entire career. In the past couple of years, Big Five houses decided to focus on blockbusters, pretty much to the exclusion of mid-list authors. As a result, many popular authors were dropped even though they had successful series.

Fellow writers/orphans are often willing to share their war stories about publishers.

Some authors have gone on to work with smaller presses. I know a few who now have contracts with several different houses at the same time.

Others decided to indie-publish or go hybrid.

The Authors Guild features a Back-in-Print program for previously published books where the author has gotten the rights back. For a fee, AG will assist in converting to new formatting for re-release as ebooks and/or print on demand (POD) hard copies. They also help with distribution.

When a publisher makes you an offer, the legal department of the Authors Guild will review and analyze the publishing contract. That single service makes their $125 membership fee worthwhile. Fly-By-Night and No-Advances-R-Us offered me contracts which I sent to AG’s attorneys. They helped me make the informed decision to say, “Thanks but no thanks.”

TKZers, do you have a favorite news source that keeps you up to date on the publishing industry?

Even though Debbie Burke is an orphan, her thriller Instrument of the Devil is still available here.