Allow me to share the story of a writer you may have heard of, and if you haven’t you either aren’t a mystery/thriller fan (you’re here on Kill Zone, I’ll assume you are) or you aren’t paying attention. His name is Robert Dugoni, the author of 18 novels across three series and one literary novel that just sold to Hollywood, as have several of those novels. He is a multiple New York Times bestseller, with enough other lists and awards and credits to fill up an entire Kill Zone post.

This month we celebrate that an author of mystery and thrillers (legal thrillers, murder mysteries and spy stories) is on the cover of Writers Digest Magazine. (Never mind that WD has labeled this their travel writing issue, the monthly interview here is all about writing novels.) He is one of us, and he has something to say to all of us who ply this craft.

There is an amazing bottom line to this author’s journey, which he describes with perfect focus and humility from a teaching perspective. We’re all on that path, seeking a summit, as he has over twenty years of searching for that intersection between craft and art.

He’ll tell you he’s still climbing and learning, too.

He started out with his skill (his “art”) as a writer—honed through a background in journalism and as a defense attorney—with the risky yet common belief that the story-craft side of things was a no brainer. He’d been a reader of quality novels since childhood, so of course he knew in his gut how a novel came together and what makes it tick.

He believed that’s how successful writers do it. Some of them actually claim it as their experience. They just take a chair and start typing, letting the story flow out of them. It would take him years to realize that such advice is toxic, if not an outright lie.

Those years commenced when he left the practice of law after 13 years to pursue his dream of writing fiction. Full time, cold turkey. What he didn’t know was that it would take six years to arrive at that magic moment when craft and art finally embrace, with a brief time-out to write a non-fiction book that become a 2004 Washington post Book of the year (The Cyanide Canary). After that he went back to his dream and his WIP, which was a legal thriller titled The Jury Master.

Here’s a little more math for you: over those six years, he submitted The Jury Master to 42 agents. A lot of us would have hung it up after such a string of rejections. Sometimes he would go back and tweak the story, but he received very little input that he could use to raise the bar. He was on his own, as most of us have felt at some point in our journey.

In the meantime life continued, and he found himself frequenting a neighborhood bookstore… where he happened upon a shelf he’d never paid much attention to before: the place where the writing craft books were displayed. Mind you, this was the early 2000s decade, and there wasn’t a James Scott Bell or a Donald Maass or a Larry Brooks writing craft books yet. No, in 2004-07 we’re talking Al Zuckerman, Christopher Vogler and Sol Stein, to name a few of that era.

That’s when an epiphany blew up his life. In a good way. He realized he really didn’t know what he was doing as a novelist. Even after all that reading, his “gut” wasn’t getting the job done.

So Dugoni took over a year off to absorb as many craft books as he could, searching out teachers of fiction craft, applying the principles he discovered to the now dog-eared manuscript of The Jury Master, assembling more than few binder full of notes. Finally this lead to what was, in sum, a total rewrite of the novel.

The storybook outcome of this launch phase of Robert Dugoni’s career, the fruition of all that study, was that The Jury Master landed an agent forthwith, and the book became his first New York Times bestseller, and the first of a five-title series featuring hero David Sloan. Who was, of course, an ace attorney with a mysterious past.

Anyone who tells you writing cannot be taught is thus proven wrong.

Or at least, confused. Sure, Robert Dugoni was a Phi Beta Kappa from Stanford, but that doesn’t mean the knowledge isn’t accessible to anyone with the discipline to seek it out.

What is hard to teach is how to land on a worthy story idea/concept/premise—that requires a learning curve and a keen sense of dramatic and thematic potential, as well as commercial viability. I’m not saying the craft essential to actually writing an idea as a novel is easily or quickly taught—Brother Bell will second me on that one, I’m sure—just that the information and framing of what you need to understand is out there, relevant and more than ready to change your writing life.

Cut to 2020, and this July cover article/interview with Writers Digest Magazine.

By now Robert Dugoni has sold over six million copies of his 18 novels, including the bestsellers My Sister’s Grave (which launched the 7-title Tracy Crosswhite series), and The Extraordinary Life of Sam Hell (his literary novel), as well as the new Charles Jenkins spy series, with the second title due out end of September.

The author of that July 2020 Writers Digest article/interview was, well, me.

I’ve known Bob for years after hanging out at writing conferences and discovering that, despite him being a pantser and me an outliner, we shared a strikingly similar outlook on the craft. Ultimately he would go on to blurb one of my novels (Deadly Faux) and my 2017 craft book (Story Fix). More recently, he wrote the Foreword to my new craft book (Great Stories Don’t Write Themselves), published last fall.

Having written for Writers Digest many times, I pitched the editors on the interview, and they didn’t hesitate. The transcript was over 7000 words, and if you’ve ever edited and assembled an interview toward a coherent through-line narrative, you know how long it takes to get it down to 2500 words. WD loved what he had to say, and asked for an additional 800 words. The interview not only covers the timeline of his career, it also delivers abundant take-aways and learning that will be well worth a hungry writer’s time.

In this interview Robert Dugoni has given us a master class on how to avoid the most common mistake and pitfall that explains the 96 percent failure rate of manuscripts submitted to agents for representation (this via The Huffington Post; rejection is almost always a combination of less-than-compelling or original story ideas—which is indeed hard to teach—alongside a flawed sense of structure, character, flow, or simply the writing itself… all of which reside at the very teachable heart and soul of craft).

Which brings me back to today’s title. It’s that word: performance.

Robert threw it in at the end of the interview, and it was something I’ve never heard a writer say before. It froze me with introspection. He says that when a writer has internalized and assimilated and worked with the core principles of storytelling craft—to the point that she or he can see it just below the surface in the books they read, and within their vision for the stories they want write—only then can they truly and effectively sit before the blank page and actually perform. And when that happens, when the writer truly knows how a story should work, it becomes a blissful experience.

This is true regardless of one’s writing process preference, pantser and planner alike. Craft empowers both, the lack of it compromises both.

We perform, in the same context that any professional puts themselves in front of an audience to present their art, relying instinctually on the compounded sum of their years of study and practice of their craft. Singers. Actors. Editors. Athletes. Doctors and nurses and their medical peers. Therapists. Shrinks. Mechanics. Pilots. Designers. They are all artists. But before their art can work at a professional level, a level where people pay money to experience their art, they needed to build a foundation of craft, of the knowledge of their chosen field of work.

Writers who struggle for many drafts over what is often many years are, in fact, searching for and struggling with their handling of those core craft principles. Some aren’t even aware of what they’re missing. All of us know that feeling, just as Dugoni did for those six early years and those 42 rejected drafts.

But he’s a testament as to what can happen when you truly submit to the truth that it is craft will set you free, and allow you to set sail in pursuit of your writing dream.

As a footnote, Robert Dugoni continues to teach at conferences and runs his own annual retreat. Not because he needs to—before the virus and with his prodigious output, he was traveling to book signings nearly every weekend—but because he truly wants to give back, so that we don’t burn six years or more of our life, as he did, chasing something that can outrun us if we aren’t sure what we’re chasing. 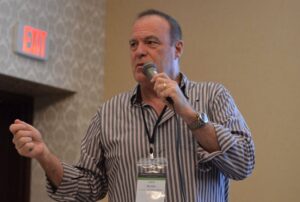 Larry Brooks is a former Kill Zone blogger who has maintained his own website, Storyfix.com, since 2010. He is the USA Today bestselling author of six thrillers and four books about writing fiction, including Story Engineering.