I’m a second or third draft writer. That’s the point in the process when I get to see what kind of clay I’ve really got on the wheel, when I can crimp the edges and pull out my high points, and make the dire ones worse. When I’ll stay up twenty hours straight and, after 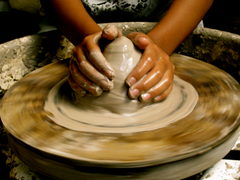 just enough sleep to make me more tired, go at it again. Because by then I have something to work with. But that first, initial draft? Pull my fingernails out from the beds with pliers, why don’t you.

I have friends who turn on their playlists and lay down first drafts in a state of euphoric bliss—the weird literary equivalent of women who experience pleasure in childbirth. I have never written like that. I have moments of stream-of-conscious ecstasy that churn out sentences as coherent as word salad. But most of the time I sit in silence, stare out the window, pick at my lower lip and wonder if my last book, which may have won some award, was the last good thing I had in me.

Eight novels in (ten, if you count the unpublishable ones), I have an instinct about the basic material I need to get down, more or less in order. More importantly, I have trust in the writing and editing process and faith that I can patch up the leaks—later.

For now, in the early stages, I’m only interested in one thing: getting the clay on the wheel. I trust that there are seeds in there—of things real, from me, that will resonate in another soul in months and years to come. I don’t know what they are yet and it’s not my business to force them into shape.

I have a few rules for this process but the first is the one I go back to every time, and it is this:

“But what about the audience? You have to think about them!” Forget them. Everything you do from your edits on will be about them. But for now, write with the candor you would in a secret journal. This isn’t about pantsing or plotting. It’s about capturing the grit you need without worrying that it’s pretty or eloquent or clean enough. Don’t be pretty. Be raw.

If you are an aspiring writer whose end goal is to be published, let me tell you something: you will never be as bold and daring as you are in those first years before your work gets published. Before critics post public reviews of your work and readers rank it alongside blenders on Amazon. Before even accolades usher their own kind of doubt into the next endeavor. This undiscovered period in your life is an advantage you won’t have twice. Use it.

These days, I have to trick myself into following this rule. I know my agent, editor, and a movie producer are waiting for my first draft. I want them to like it. Oh, who am I kidding—I want them to tell me it’s the best thing they’ve ever read, that they wept, told their therapist, and pre-ordered 100 copies for friends and distant acquaintances.

But the only way I will touch one cell of their soul is if I banish their faces from my mind. No one will read this. It is my mantra. This is me, writing secret stuff, dealing some audacious literary badassery in private. Time to edit, censor, and make coherent later. The good stuff happens now. 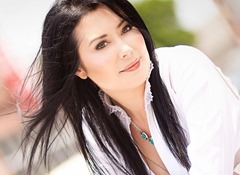 Tosca received her B.A. in English and International Relations from Smith College in Northampton, Massachusetts with studies at Oxford University. She is a lifelong world adventure traveler and makes her home in the Midwest. To learn more about Tosca, visit www.toscalee.com.