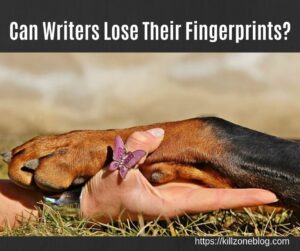 In a recent chat with Jordan, she mentioned that when she went for her TSA pre-check ID for her upcoming trip, they couldn’t detect her digital fingerprints.

They said since she spent so much time at a computer keyboard as a writer, she’s deteriorated her ridge detail.

Could this be true of all professional writers?

As you might have guessed, this question sent me down a rabbit hole of research, because I’ve had trouble with my iPhone’s digital fingerprint scan. It only recognizes my thumbprint, not any other finger. Which I figured was just a glitch with the phone. Now, I’m not so sure.

Before we can prove or disprove TSA’s conclusion, we first need to know the basics.

What is a fingerprint?

A fingerprint is a pattern of friction ridge details, comprised of ridges and valleys. A ridge is a high point, a valley is a depression or low point. Friction ridges are also found on our palms, feet, and toes. “Pattern” equals the unique characteristics of the ridges and valleys that make up the print, defined by the spatial relationship of multiple lines, their beginning and terminating points, and the unique pattern they create.

Each ridge contains tiny pores connected to sweat glands beneath the skin. When we touch an object, sweat and oils release from these pores and leave behind a print, latent or visible. The genes from our parents determine the general characteristics of the pattern. 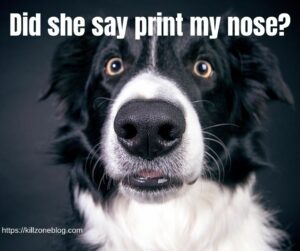 Sir Francis Galton was the first person to classify fingerprints into different types based on the three basic features: loops, arches, and whorls. Learn more about points, types, and classifications HERE.

Fingerprints form before birth and remain unchanged until the body decomposes after death.

There are two exceptions to “remain unchanged”… 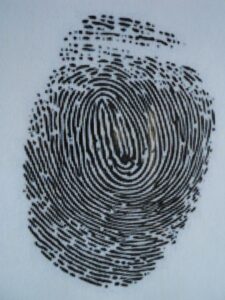 If, say, someone sliced the tip of their finger with a knife, it may leave behind a scar. But then, their fingerprint would be even more distinguishable because of that scar.

Along similar lines, severe burns can also damage the deep layers of skin and obliterate the ridge detail. However, much like the knife injury, the scars that form would become the injured party’s unique identifiers.

The other exception has to do with the elderly. As we age, we lose skin elasticity, which may affect ridge detail. The fingerprints become wider; the spaces between the ridges narrower. Even though the fingerprint still exists, fingerprint technology may find it more difficult to detect.

Can someone be born without fingerprints?

In a few rare cases, yes. One condition called adermatoglyphia — also known as “immigration delay disease” — can result in a child being born without fingerprints. In some cases, these infants have almost no other health issues. In other cases, this condition could cause skin abnormalities, including tiny white bumps on the face, blistering of the skin, and/or a lack of sweat glands. Adermatoglyphia has only been documented in four families worldwide.

Naegeli Syndrome is another rare condition that halts the production of fingerprints in utero. Said syndrome is characterized by reticular skin pigmentation (meaning, mottled, purplish, and lace-like splotches), diminished function of the sweat glands, and the absence of teeth. Individuals with Naegeli Syndrome have sweat gland abnormalities. Not only do they lack fingerprints but they also suffer from heat intolerance due to a decrease or total inability to sweat.

Do Twins Have the Same Fingerprints?

No. Twins do not have identical fingerprints. Our prints are as unique as snowflakes. Actually, we have a 1 in 64 billion chance of having the same fingerprints as someone else.

Sci-fi writers could potentially take advantage of these odds, but it’s such a longshot that it’d be tricky to pull off.

Who’s most at risk for losing their fingerprints?

Patients undergoing chemotherapy — such as capecitabine (Xeloda), for example — are most at risk. With prolonged use of this medication, the finger-pad skin can become inflamed, swollen, and damaged to the point of erasing the ridge detail, according to DP Lyle, MD, author of Forensics for Dummies. Chemotherapy may also cause severe peeling of the palms and soles of the feet. The medical term for this condition is called Hand-Foot Syndrome.

Skin diseases like scleroderma, psoriasis, and eczema also have the potential to obliterate the ridge pattern.

Which professions cause the most damage to fingerprints?

Bricklayers and other heavy manual laborers can wear down their fingerprint ridges to the point where no pattern is visible. Secretaries and file clerks who handle paper all day can have a similar thing occur. Typists (Writers!) and piano players can suffer the same alterations. Hairstylists, dry cleaning workers, and those who work with lime (calcium oxide) are often exposed to chemicals that dissolve the upper layers of the skin, thereby flattening the ridge detail.

So, to answer our initial question, was TSA correct?

Yes! Pounding on the keyboard can wear away a writer’s fingerprints.

Losing one’s prints can cause issues with crossing international borders and even logging on to certain computer systems.

Have you ever been told you have no digital fingerprints? Have you experienced any problems with fingerprint technology?