Fiction writers are nuts. Crazy. Not right in the head.
You have to be, at least a little bit. I mean, you want to make stuff up and expect to get paid for it? You want people to give you money for lying? You could go to law school for that. Why write?
You want to invest years of time plugging away at fiction with no guarantee of return? You want to endure the looks of pity and scorn you get around the Thanksgiving table when it’s your turn to talk about what you do?
Yes, we’re all more than a little unhinged in this game.
Sometimes, it gets even crazier. Like now.
I’m doing “The Asimov.” 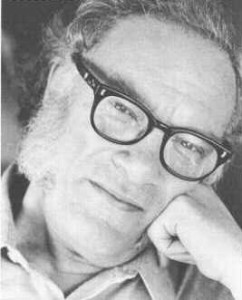 Isaac Asimov was one of the most prolific authors of all time. Something north of 500 books. Not just fiction, but science, history, Shakespeare scholarship, biblical studies, jokes. Sheesh, how did he do it?
By having no life, that’s how (he said so himself). Asimov had several typewriters around his New York apartment, each with a different project in it. When he tired of working on one he got up, stretched, walked across the room and went to work on  another.
He’d “snatch time.” If he had a fifteen minute wait for something – say, guests to arrive –– he’d write.
Writing madness, that’s what possessed him. And I fully understand it.
I’ve been working for days on edits of a manuscript, brainstorming new scenes for a novel in progress and reading pages for two projects on which I’m a consultant. This morning I revised a story and hammered out final details on my seminar. I looked at the clock. I thought an hour had gone by. It was lunchtime.
I made myself a steak sandwich and parked in front of the TV to watch a little ESPN while I ate.
I also grabbed my AlphaSmart Neo, the nifty, light, dedicated word processor that runs on AA batteries, upon which I am typing this essay.
Type. Eat. Watch. Stupid Dodger owner. Type. Eat.
Cut to:
The steak sandwich is gone. And I’ve got a blog entry almost done.
That’s The Asimov.
I have some writer friends who say they cannot do this. They can only concentrate on one project at a time. Personally, I think they’d find The Asimov refreshing. Taking a “rest” on one project lets the brain cells work on it under the radar.
But who knows? Brains are wired differently. That’s why we have Jersey Shore and Masterpiece Theater coming out of the same box.
What about you? Can you work on more than one project at a time, with the same intensity? Or do you think that’s a ticket to madness?


It’s time for some ice cream now. Excuse me.
James Scott Bell
First, I want to thank everyone for the launch of my new book last week. I spent most of Sunday chatting up the book in social media. A “virtual book tour” so to speak. Then I sort of watched to see what would happen. It’s only been one week and one book, but the results have exceeded my expectations.
And I have more of this material in my pipeline. A lot more. Because as I mentioned last week, I love the old pulp days when writers really wrote, fast, because they had to.

Fast does not mean hack work (it can, of course, but not necessarily). I’m not discussing the editing process, either. Concentrated effort is what I’m talking about. I contend that many young writers would actually improve their craft –– and chances of getting published –– if they would write faster, especially at the beginning of their learning curve.
First, a few facts. Some of the best novels of the past century were produced at a rapid clip by authors who found writing time each day, and went at their task with singular resolution:
— William Faulkner wrote As I Lay Dying in six weeks, writing from midnight to 4 a.m., then sending it off to the publisher without changing a word.
— Ernest Hemingway wrote what some consider his best novel, The Sun Also Rises, also in six weeks, part of it in Madrid, and the last of it in Paris, in 1925.
— John D. MacDonald is now hailed as one of the best writers of the 50s and 60s. Within one stunning stretch (1953-1954) he brought out seven novels, at least two of them – The Neon Jungle and Cancel All Our Vows – brilliant (the others were merely splendid). Over the course of the decade he wrote many more excellent and bestselling novels, including the classic The End of the Night, which some mention in the same breath as Truman Capote’s In Cold Blood. Also Cry Hard, Cry Fast, which is the basis for the title of this blog entry.
So prolific was MacDonald that he was needled by a fellow writer who, over martinis, sniffed that John should slow down, ignore “paperback drivel” and get to “a real novel.” John sniffed back that in 30 days he could write a novel that would be published in hardback, serialized in the magazines, selected by a book club and turned into a movie. The other writer laughed and bet him $50 that he couldn’t.
John went home and, in a month, wrote The Executioners. It was published in hardback by Simon & Schuster, serialized in a magazine, selected by a book club, and turned into the movie Cape Fear. Twice.
–Ray Bradbury famously wrote his classic Fahrenheit 451 in nine days, on a rented typewriter. “I had a newborn child at home,” he recalls, “and the house was loud with her cries of exaltation at being alive. I had no money for an office, and while wandering around UCLA I heard typing from the basement of Powell Library. I went to investigate and found a room with 12 typewriters that could be rented for 10 cents a half hour. So, exhilarated, I got a bag of dimes and settled into the room, and in nine days I spent $9.80 and wrote my story; in other words, it was a dime novel.”
I’ve counseled many writers at conferences who have come with a single manuscript yet haven’t got another project going. I tell them, “That’s wonderful. You’ve written a novel. That’s a great accomplishment. Now, get to work on the next one. And as you’re writing that next one, be developing an idea for the project after that.”
You see, publishers and agents are not looking for a book. They are looking for solid, dependable writers. They invest in careers. They want to know you can do this over and over again.
The best advice I ever got as a young writer was to write a quota of words on a regular basis. I break my commitment into week-long segments (anticipating those days when I ride a bike into a tree or some such). I believe this discipline has made all the difference in my career. The testimony of so many other professional writers attests to its value.
One such testimonial comes from Isaac Asimov, author/editor of 500+ books. He was once asked what he would do if were told he had only six months to live.
“Type faster,” he said.