Joe’s recent post about theme put in mind this quote from The Boss:

“I’ve always believed the greatest rock and roll musicians are desperate men. You’ve got to have something bothering you all the time. My songs are good because … it’s like in art and love, hey, one and one makes three. In music, if it makes two, you’ve failed, my friends. You know, if you’re painting, if all you’ve got is your paint and your canvas, you’ve failed. If all you got is your notes, you’ve failed. You’ve got to find that third thing that you don’t completely understand, but that is truly coming up from inside of you. And you can set it any place, you can choose any type of character, but if you don’t reach down and touch that thing, then you’re just not gonna have anything to say, and it’s not gonna feel like it has life and breath in it, you’re not gonna create something real, and it’s not gonna feel authentic. So I worked hard on those things.” – Bruce Springsteen
We need to get that. Your book, if it’s going to go anywhere, has to be about more than what it is about. It has to dig deep somewhere, so the readers think there’s a “there” there, something the author really cares about.
An “inner ferret,” as grandmaster thriller author David Morrell puts it. Others might call it heart. Still others, like the late great Red Smith, say, “Just open a vein.”
But your novel should be something that moves your insides around.
How do you find it?
Start making a list. Make a list of things that bother you, that get your juices flowing. I often ask writing students what is something that would make them throw a chair out the window? Write about that thing. Put that feeling inside your Lead character.
Or make a list of memories that are vivid to you. Why are they vivid? Because your subconscious is trying to tell you something. Find that thing.
Ray Bradbury started making a list of nouns of remembrance when he was young. He came up with nouns like THE LAKE, THE CRICKETS, THE SKELETON, THE NIGHT, and so on. Each one of these referred to something from his childhood. He went into those memories and mined them for stories.
Childhood fears seem to play a big role not only for Bradbury, but also King and Koontz. Figuring out why justice is worth going for in a world that seems dead set against it animates Michael Connelly . . . and me. That seems to be a consistent thread throughout my novels.
Maybe that’s because I was brought up by a dad who was an L.A. lawyer who often represented the poor accused of crimes. He had a passion for the Constitution and criminal justice. I guess I absorbed that.
So what about you? Is there some “inner ferret” that drives your writing? What equals three for you?

I thought I’d follow on from Jim’s terrific post yesterday about writing with heart, and discuss an issue that is just as important in my view – writing what you love and not what you think the market will love. It drives me crazy when people say “you should write a romance – you’d make more money that way” or (even weirder) “You should write erotica – it’s really hot (no pun intended) right now.” For some reason there always seem to people wanting to make ‘helpful suggestions’ on what you should write – usually by pointing out the ‘hot’ genre on the current bestseller list, as if that is all it takes. Hey, if you just added a paranormal element to your mystery, shazam, you’d have it made.
If only it was that easy…For many wannabe writers the thought of becoming the next J K Rowling or Stephenie Meyers is enticement enough, as is the belief that somehow if you write to what you think the market wants, your future will be secure. Wrong.
Setting aside the obvious (that by the time you’ve written what the market loves now, the market has already shifted to something else) there is something more fundamental at stake. As my agent always says, you must write what you love. Why? Because it shows.
It shows if you are writing a romance when you think it’s ‘easy money’. It shows if you write a YA fantasy when you really want to write contemporary thrillers…If your heart isn’t in it, the readers will know you’re faking it.
I did a course in Australia years ago on ‘how to write a romance’. I admit I did it as a lark and in the mistaken belief that ‘anyone can write a romance’ (I cringe now when I think of my attitude). I had never actually read a Harlequin romance before I did the class, and once I had, I realized I didn’t enjoy them at all. They weren’t my thing. So why did I think I could write one?? It wasn’t until the end of the course that I realized my mistake: it felt fake, and then the realization set it, I was writing a romance for all the wrong reasons.
When I came to the US, I did another class and this time I fell into a different trap. This class was full of so-called serious writers and I felt the constant pressure to prove my ‘literary merits’ (when given everyone’s ego was impossible – the only way members of this class felt good was by putting other members down). So then I faced another hurdle – how could I write what I loved when all I was worrying about was making sure what I wrote was ‘literary’ enough.
It took a while before I could set aside my misconceptions (that I should write what will sell, that I should write something ‘worthy’ etc.) Eventually I sat down and wrote what I loved, what I actually wanted to read, and you know what, it showed…(and, thankfully, it also got me published!)
So what about you? Have you ever felt pressured to write for the market, or to switch genres just because there was money it in? How have you dealt with the ‘helpful’ suggestions people make which means putting the market ahead of your heart? 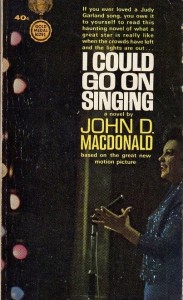 John D. MacDonald wanted to bury the corpse. In this case, the corpse was one of his books. In 1963 he accepted an offer to write a novelization of a movie. The movie was Judy Garland’s I Could Go on Singing. MacDonald took the gig because the money was good.

The book wasn’t. Even he knew it. After it went out of print, MacDonald never gave permission for it to be printed again.

Since I collect MacDonald, I snagged a copy from a bookstore owner I know, who charged me a fair price. I did read it. And no, it isn’t up to MacDonald’s usual standards.

It’s pretty obvious why: his heart wasn’t in it. It wasn’t his material.

Lesson: If you’re going to get your writing noticed, read, published and re-read, you have to put your heart into it.

You’ve no doubt heard that before. At least once at every writer’s conference, you’ll hear someone on a panel say, “Forget chasing the market. Just write the book of your heart.”

I understand what’s being said, though I would tweak it a bit. You have to find the intersection of the market and your heart, then get that heart beating.

I’m a professional writer. I cannot afford to frolic in the fields of eccentric experimentation. But that doesn’t mean I only write what I think will make money.

There are those who have done that. Nicholas Sparks is right up front about how he chose his genre. He saw the tear-jerker-romance-by-a-male-author slot as a great business opportunity. David Morrell talks about this in his fine book, Lessons From a Lifetime of Writing. Morrell himself says he couldn’t do it that way. He has to have something “gnawing” at him to write. He has to find the heart of the matter.

It’s like when I was a criminal defense lawyer. (Spare me the jokes. When your son or daughter is arrested, you’ll call someone like me.) Anyway, defense lawyers have an essential part to play in our system of justice. It’s called upholding the Constitution. That’s what you have to believe when you’re defending someone who is pretty much cooked as far as the evidence goes. You have to believe that, or you’ll do a lousy job.

I write for readers. I write so that readers will enjoy what I write and buy my next book. But to do that, I have to find the heart of the story and ramp up the passion level.

See, the unexpurgated “book of my heart” would be a post-realistic satirical look at the philosophy department of a major university, written somewhat in the style of Kurt Vonnegut channeling Jack Kerouac.

Could I sell such a book? I don’t know. I know I’d enjoy writing it, but I also know it would be tough to sell a marketing department on it.

I could write it for fun, and might someday, but right now I need to keep earning a living.

So what I do is take my favorite genre, thrillers, think up concepts and then make them the book of my heart. I find ways to fall in love with my story.

The way it happens for me is through characters, getting to know them deeply, creating a colorful supporting cast –– and then scaring the living daylights out of them in the plot.

How about you? What gets you amped about your writing?