Last weekend I was at the Central Ohio Fiction Writers conference, where I met up with TKZ regular Steve Hooley. Steve handed me a package which had, inside, a most remarkable fountain pen.
Remarkable because Steve made it himself. Not only that, he made it out of Irish bog wood, which he ordered special, in celebration of my Irish ancestors. He lathed the wood and polished it, then put together the other components. It’s the kind of pen that would run a few hundred bucks if you bought it at a Waterman store. 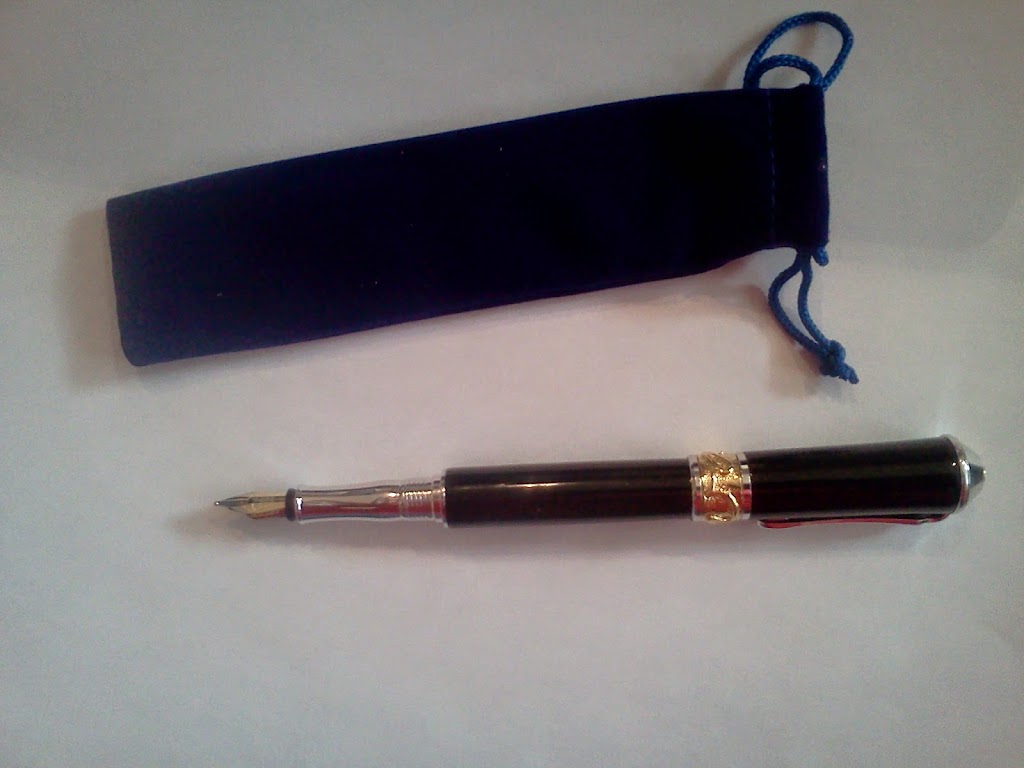 He even put green ink in it, another nod to the Emerald Isle.
I hold this fine instrument in my hand with trepidation. I don’t wish to befoul a virgin sheet of paper with the indecipherable scrawl that is my cursive writing. Ever since I first learned handwriting, I have never been able to get it to look like anything other than a secret code made up on the spot by a drunken Croatian spy. Steve’s pen deserves to have beautiful writing at the end of its nib, which is why entrusting it to me is like placing a twelfth-century illuminated manuscript in the jaws of a pit bull for safekeeping.
However, I have determined that it must be used. Otherwise, it would be like having a solid gold Cadillac in the garage, covered in a tarp and never taken out for a spin.
Now, it just so happens I have a completely blank Moleskine notebook sitting on my shelf.
All this calls to mind (mine, at least) the Paris of the 1920s. I should be like Hemingway or Fitzgerald and find a cafe with outdoor tables, and make notes on the passing scene, or try to write “one true sentence.” I should be jotting my thoughts about writing and the writing life so this notebook can be discovered by my heirs after I shuffle off this mortal coil, and be published with great fanfare (or some kind of fare, even if it’s just cab fare).
Maybe it should be a diary of my deep, dark secrets, such as: I actually like Hamburger Helper. I think Bruce Springsteen is overrated. I have a secret longing to return to this life someday as Sam Elliott’s voice.
Frankly, I don’t know what to do. Should I journal? Doodle? Try to write a story? What is the best use of my beautiful pen and immaculate notebook?
I will entertain suggestions from the TKZ community.
I thank you.
What about you? Are you a pen person? Do you like the feel of it? Or are you a dedicated typer?
And what will happen to our culture as cursive writing slides into oblivion?

Joe’s recent post about theme put in mind this quote from The Boss:

“I’ve always believed the greatest rock and roll musicians are desperate men. You’ve got to have something bothering you all the time. My songs are good because … it’s like in art and love, hey, one and one makes three. In music, if it makes two, you’ve failed, my friends. You know, if you’re painting, if all you’ve got is your paint and your canvas, you’ve failed. If all you got is your notes, you’ve failed. You’ve got to find that third thing that you don’t completely understand, but that is truly coming up from inside of you. And you can set it any place, you can choose any type of character, but if you don’t reach down and touch that thing, then you’re just not gonna have anything to say, and it’s not gonna feel like it has life and breath in it, you’re not gonna create something real, and it’s not gonna feel authentic. So I worked hard on those things.” – Bruce Springsteen
We need to get that. Your book, if it’s going to go anywhere, has to be about more than what it is about. It has to dig deep somewhere, so the readers think there’s a “there” there, something the author really cares about.
An “inner ferret,” as grandmaster thriller author David Morrell puts it. Others might call it heart. Still others, like the late great Red Smith, say, “Just open a vein.”
But your novel should be something that moves your insides around.
How do you find it?
Start making a list. Make a list of things that bother you, that get your juices flowing. I often ask writing students what is something that would make them throw a chair out the window? Write about that thing. Put that feeling inside your Lead character.
Or make a list of memories that are vivid to you. Why are they vivid? Because your subconscious is trying to tell you something. Find that thing.
Ray Bradbury started making a list of nouns of remembrance when he was young. He came up with nouns like THE LAKE, THE CRICKETS, THE SKELETON, THE NIGHT, and so on. Each one of these referred to something from his childhood. He went into those memories and mined them for stories.
Childhood fears seem to play a big role not only for Bradbury, but also King and Koontz. Figuring out why justice is worth going for in a world that seems dead set against it animates Michael Connelly . . . and me. That seems to be a consistent thread throughout my novels.
Maybe that’s because I was brought up by a dad who was an L.A. lawyer who often represented the poor accused of crimes. He had a passion for the Constitution and criminal justice. I guess I absorbed that.
So what about you? Is there some “inner ferret” that drives your writing? What equals three for you?