Full Disclosure: Jump cut may not be the correct term for the advice that follows. Years ago, the late great John Yeoman, beloved writing coach and friend, called the cinematic technique a jump cut during one of our lengthy craft discussions. Thus, it’s the term I’ve always used. Then I reread JSB’s 2018 article to prepare for this post. Jim’s correct use of the term is more widely known. Nowhere could I find the description of what I call a jump cut. Nonetheless, the two techniques are basically the same. When I use the term, I’m referring to the macro-level. Jim’s post focused on the micro-level.

The macro-level jump cut is a technique where the writer drops the reader into a harrowing situation—in media res—conflict builds, tensions rise, all without the reader knowing what proceeded this scene (aside from a few hints). The scene ends at a pivotal moment. Next scene rewinds the clock to the days or hours leading up to the opener. We’ve all seen this play out in movies and net-streaming series. Novelists use it to ensure readers will stick around to find out how the protagonist wound up there. Inducing curiosity and/or fear in the opener strangleholds the reader, forcing them to keep flipping pages.

The payoff that follows must live up to the hook. All my Grafton County Series novels (except the first book) open with the first half of the jump cut scene. Chapter One rewinds the story. It isn’t necessary to label this scene as a prologue. I do, but it could also be the first chapter. If you choose to include it as a prologue, Chapter One still needs its own hook.

Remember the pivotal moment where we left the reader? No matter where the payoff is—first plot point, midpoint, or climax—continue the jump cut scene from there. Newer writers may be tempted to copy/paste the first half of the scene. Resist that urge. Trust the reader to connect the dots. They’ll recognize the setting and situation. 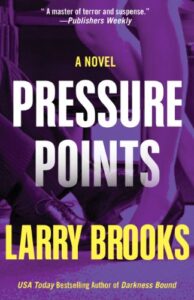 The Prologue of Pressure Points by Larry Brooks opens like this…

It was the echo of gunfire that kept him running. His body had long ago abandoned hope, pushing on faith alone through a fog of pain and fatigue. Logic screamed that this was pointless, while another voice whispered it was all a lie. Both were old friends that had served him well, and like Jesus on his fortieth desert night, he was tempted.

But neither voice was real. The gunshot had been real. The echo of it was real.

And so he ran. For his very life, and for those left behind. He knew that precious little time remained, and what was left was as critical as it was dwindling. Everything he had ever learned or believed or dreamed was at stake. He was out of options, down to a final chance that, win or lose, would be his statement to the universe.

It was his time. He had come full circle.

It is not paranoia when they are really out to get you. When they are right on your ass, downwind of the scent of your blood, closing fast.

Whoever the hell they are.

He ran all through the night’s relentless downpour. Low branches whipped his forehead and cheeks until they bled. He could feel his heart pounding in every extremity of his body, his vision clouded by sweat and rain. Both elbows were bloodied from a fall when his foot caught an exposed root, sending him skating wildly across a patch of decaying leaves. Leaping over a rotting log, he felt his right ankle turn impossibly inward, and the ensuing bolt of pain seized his leg like a pair of gigantic hands twisting with the enthusiasm of a gleeful sadist. But he had no time for this or any other distraction, not on this night, when, one way or the other, his past would finally and conclusively catch up with him.

Chapter One rewinds to 41 days earlier. I can’t show you the payoff scene without ruining the ending. Trust me, it’s amazing. 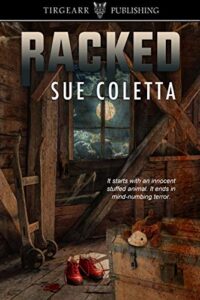 Please excuse my using an excerpt from one of my books. I searched my Kindle for other examples but couldn’t find any that jumped out at me.

The Prologue of RACKED opens with…

In the vast openness of the snowmobile trails, solar-powered Christmas lights danced across pine needles on the branches I separated while the lanky silhouette of the Serial Predator tossed shovelfuls of dirty snow on a mound. Was he digging a fresh grave? My calf muscles jumping-jacked beneath my skin, begging me to run. But I couldn’t. Not yet.

A row of thin birch trees bowed over the makeshift grave, thin branches curled like the skeletal fingers of a demon protecting its prey. The overcast sky blurred the hazy moon into non-compliance, its glow hastened by gathering storm clouds.

Who did he plan to bury here? My gloved hand clawed at my throat.

Please tell me Noah’s still with Mrs. Falanga. All the saliva in my mouth dried, my insides squirming, screaming for release. What if Childs left his post long enough for the Serial Predator to sneak past him? What if he murdered everyone in the house? What if he abducted my son after Mrs. Falanga tucked him in bed? She might not realize he’s missing till dawn.

Beyond the tree a flashlight balanced on its end, a smoldering yellow glow pointed toward the heavens. Cigarette smoke billowed through the haze. Hot ash tumbled into the darkness when he flicked the filter into the arctic December air.

I backed away from the tree.

My right heel froze on the pinecone.

The Serial Predator slung his portable spade over one shoulder and stalked toward me. “Hello?”

Male voice. Almost familiar. Where had I heard it before?

Holding my breath, cramps squeezed my calf muscles as I crouched behind the conifer, flames tunneling down my sciatic nerve to my partially raised foot, bent at such an angle mind-numbing pain riddled the whole right side of my leg.

The Serial Predator hustled back to the shallow grave, and I lowered my wet boot to the snow. The moment he turned his back, I nosedived toward the base of the tree trunk, slithering beneath the branches like a frightened garter snake. Snow piled around the bottom helped shield the top half of my body. I pulled my legs out of view. A glacial breeze swept across my wet hair, and I could not stop shivering, the icy snow soaking through my jeans and wool coat.

With one smooth motion, he swiped his flashlight off the snow and aimed the beam toward the pine tree. “Hello?”

After the blinding light struck my eyes, I would never be able to describe his face or any distinguishable features, the black hoodie masking his identity. He could be anyone. Or no one.

With both gloved hands covering my nose and mouth, I held back icy breath that threatened to reveal my hiding spot.

A cylindrical sphere lasered through the pine needles, and I ducked, my bare cheek trembling against a clustered mass of icicles. Snow boots clomped around the tree, then stopped—inches from my face.

Chapter One rewinds to 26 hours earlier.

Have you used this technique in one of your novels? There’s nothing wrong with writing a linear storyline. This is just another option. Let’s discuss.