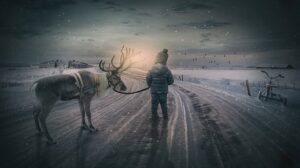 The holiday season is a hectic time, with planning the perfect family celebration, shopping for gifts, decorating the house, inside and out, and mailing cards.

Many have stopped the tradition of sending holiday cards. For me, there’s something so special about peeking into the mailbox to find a card. It means someone took the time to wish you happy holidays, trekked down to the Post Office, or raised the tiny red flag on their mailbox to signal outgoing mail. It’s a beautiful tradition that I fear new generations will let slip away (along with cursive handwriting). I love the holiday season, the frigid temps thawed with magic, possibilities.

With the frenzy of Black Friday and Cyber Monday, I thought I’d share 10 fun facts about reindeer, originally posted on my blog in 2018.

1. A Reindeer By Any Other Name is Still a Reindeer

In some regions of the world, Reindeer are called caribou. In North America reindeer refers to Eurasian populations and caribou refers to wild populations.

2. Reindeer Belong to the Cervidae Family

Reindeer — aka Rangifer Tarandus — have 14 subspecies, including deer, elk, moose, and wapiti. All Cervidae have antlers, hooves, and long legs.

3. Girls Can Do Everything Boys Can Do

Reindeer are the only species of deer in which both males and females grow antlers, and they grow a new set every year. Male antlers can grow up to 51 inches long and weigh up to 33 pounds. A female rack can grow up to 20 inches long.

According to the San Diego Zoo …

Antlers are the reindeer’s most memorable characteristic. In comparison to body size, reindeer have the largest and heaviest antlers of all living deer species. All antlers have a main beam and several branches or tines that grow from the frontal bones of the skull. Sometimes little branchlets or snags are also present. The tip of each antler is called a point. Unlike horns, antlers fall off and grow back larger every year.

As new antlers grow, the reindeer is said to be in velvet, because skin, blood vessels, and soft fur cover the developing antlers. When the velvet dries up, the reindeer rubs it off against rocks or trees, revealing the hardened, bony core.

4. Santa’s Reindeer Must be Female

Since males grow antlers in February and females in May, they both finish growing antlers at the same time. But male and female reindeer shed antlers at different times of the year. Males drop antlers in November, leaving them antler-less till the spring. Female reindeer keep antlers through the winter months. They’re shed when calves are born in May.

Thus, since Santa’s reindeer all have antlers, he must have an all-female team. ?

Male and female reindeer use antlers in different ways. Males wield them as weapons against potential predators. They also showcase impressive racks to woo females. Although females also war with these handy weapons, they mainly use antlers to clear snow while foraging for food.

6. Reindeer Come in a Variety of Colors

Depending on the subspecies, region, sex, and even the season, reindeer fur ranges from dark brown in woodland subspecies to nearly white in Greenland. A reindeer’s coat is dark in the summer, light in winter.

The air trapped inside the guard hairs hold in body heat to keep the animal warm against wind and cold. The hollow hair help the reindeer float, which aid them in swimming. Did you know reindeer could swim?

A reindeer’s furry hooves give the animal an advantage when walking on frozen ground, ice, mud, or snow. Spongy footpads help them strut through marshy fields. In the winter, the hooves harden to dig into ice or snow while anchoring the reindeer from slipping.

When a reindeer swims, their broad, flat, two-toed hooves allow the animal to push water aside. They even have a dewclaw which acts as an extra hoof to assist in climbing rugged terrain.

A reindeer’s specialized nose helps to warm incoming cold air before it hits their lungs. Like dogs, their super sniffer can find food hidden under snow, locate danger, and recognize direction. Reindeer are the only subspecies of deer to possess a furry nose.

Reindeer hang in herds. Not only are they safer from predators but they’re social animals, chatting among themselves with snorts, grunts, and hoarse calls, especially during mating season. Calves bleat to call their mother.

During migration, reindeer cover 12–34 miles per day and can run at speeds of up to 50 mph. Even a day-old calf can outrun an Olympic sprinter!

Hope you enjoyed these reindeer facts. Which one is your favorite?