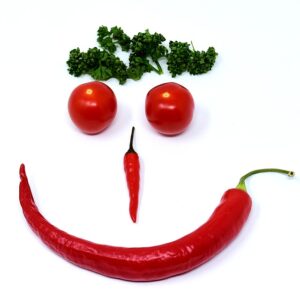 Another brave writer submitted their first page for critique. My comments will follow.

Bette always joked Marge’s baking would be their demise—but not like this. The Schuster sisters came out to their garden this morning in search of tomatoes for their weekly Girl’s-Club brunch, and though their basket was nearly full, Bette insisted they needed one or two more.

“What about those?” Marge said, pointing to a large cluster.

Bette tsked. “I’m sure we can do better. Do you want the girls eating green tomatoes? What if it was—?” She stopped mid-sentence, glanced down, and wiped her boot on a rock. “Oh, my,” she chuckled, shaking her head. “Well, if that’s the worse that happens today, I’m counting my blessings.” She continued her search. “What time did Paige get in last night?”

“I know that, Marge.” She moved down the row. “I just worry she’s not getting enough sleep.”

“She’s a student. They aren’t supposed to sleep.”

“Who’s not supposed to sleep?”

They looked up to see their boarder, backpack over shoulder, mug of coffee in hand, cut across the dewy lawn. “We were just saying,” Marge said, “that you don’t get enough sleep, dear.”

She laughed. “Can’t argue with that. But my paper’s due Monday, and I’m nervous about it. By the way, was that apple pie I smelled, or am I still dreaming?”

“Oh, my pies! I almost forgot.” Marge squeezed Paige’s arm. “If you wait a few minutes, you can have a piece.”

“It’s tempting, but I really need to get to the library.” She waved to the sisters as she hurried to her car. “Save me a slice.”

“We will, honey. Now don’t work too hard. Remember, life is short.” They watched her head to campus, after which Marge rushed off to check on the pies, promising to be right back.

Bette continued down the rows, her persistence eventually paying off. As she removed an almost perfect Brandywine tomato from its vine, a high-pitched scream split the air. She snapped her head around in time to spot a red-tailed hawk, something squirming in its beak, swoop below the treetops. Her heart was still pounding when a calloused hand grabbed her ankle, causing her to drop the basket. She jerked free, only to discover the hand was an out of control cucumber vine. 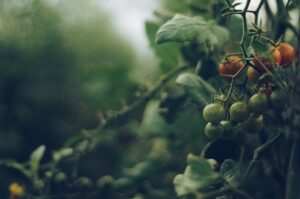 Though the sisters seem sweet, not much happens on this first page … unless you’re a research junkie like me and have studied this particular murder weapon. Which is genius, by the way. Kudos to you, Brave Writer. For those who didn’t catch it, I’ll explain in a minute.

Let’s look at your first line, which I liked.

Bette always joked Marge’s baking would be their demise—but not like this.

Your first line makes a promise to the reader, a promise that must be kept and alluded to early on. Just the suggestion of green tomatoes is not enough.

The Schuster sisters came out to their garden this morning in search of tomatoes for their weekly Girl’s-Club brunch, and though their basket was nearly full, Bette insisted they needed one or two more.

I assume Brave Writer discovered that tomatoes contain a few different toxins. One of which is called tomatine. Tomatine can cause gastrointestinal problems, liver and heart damage. Its highest concentration is in the leaves, stems, and unripened fruit. Red tomatoes only produce low doses of tomatine, but the levels aren’t high enough to kill.

Like other nightshade plants, tomatoes also produce atropine in extremely low doses. Though atropine is a nasty poison, tomatoes don’t produce enough of it to cause death. The most impressive toxin from green tomatoes is solanine. Which, as Brave Writer may have discovered, can be used as murder weapon. Solanine can be found in any part of the plant, including the leaves, tubers, and fruit, and acts as the plant’s natural defenses. People have died from solanine poisoning. It’s also found in potatoes and eggplant.

If Marge eats, say, potato pancakes along with green tomatoes during that brunch, it’ll increase the solanine and other glycoalkaloid levels coursing through her system. *evil cackle*

The nice part of solanine poisoning from a writer’s perspective is that it can take 8-10 hours before the victim is symptomatic, which gives Brave Writer plenty of time to let her stumble into more trouble to keep the reader guessing how or why she died.

If I were writing this story, I’d study the fatal solanine cases and put my own spin on it.

Hope I’m right about this. If not, my apologies. In any case, the weekly Girl’s Club (no hyphen and only capped if it’s the official title of the club) brunch seems important and so do the tomatoes. What I’d love to see on this first page is why. You don’t need to tell us, but you do need to hint at the reason to hold our interest.

What if Bette plucks the deadly fruit from the vine and notices how strange it looks? You’ll have to research to nail down the minute details of a toxic green tomato, if any differences are visible to the naked eye.

There’s one other problem with this first paragraph. Here it is again:

The Schuster sisters came out to their garden this morning in search of tomatoes for their weekly Girl’s-Club brunch, and though their basket was nearly full, Bette insisted they needed one or two more.

Who’s narrating this story? It isn’t Bette, as your first line indicates. And it isn’t Marge. An omniscient point-of-view is tricky to pull off. Newer writers should focus on one main character and show/tell the story through their eyes. If that character doesn’t hear, see, feel, taste, experience, smell, etc. something, then it must be excluded.

Yes, some writers (me included) use dueling protagonists, alternating scenes between the two, and even include an antagonist POV. But when we’re still honing our craft, especially when we’re learning the ins-and-outs of POV, it’s easiest to concentrate on one main character throughout the story. For more on mastering point-of-view, see this post or type in “point of view” in the search box. We’ve discussed this area of craft many times on TKZ.

As written, my advice is to keep the first line and either delete the rest and find a different starting point (sorry!) or better yet, saturate it in mystery regarding these tomatoes. That way, the reader will fear for your main character while the fruit lay on a bed of lettuce on a serving platter during the Girl’s Club meeting. If you choose this route, one of your goals is to make the reader squirm. “Don’t eat that tomato, Marge!”

What say you, TKZers? Please add your gentle and kind advice for this brave writer.

12 thoughts on “First Page Critique: Can You Find the Murder Weapon?”