We have another first page for critique today. See you on the other side. 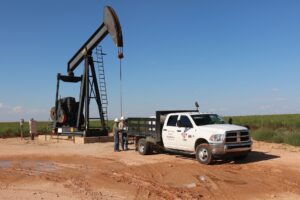 Engineering geologist Jim Checkers pushed open the door labeled “GEOCHEMISTRY LAB,” strode across the room to a workbench, and picked up a bulging old briefcase that was sitting among tools, a voltmeter, and a jar of vacuum grease. The place smelled like acetone.

“I suppose, but she’s occupied with her own business.”

“Jim, did it ever occur to you that you can’t save the world?” He stopped to listen. It was pleasant to be around Mattie, the lovely tech who analyzed his samples and generated the data.

“No,” he said, as though answering a question about the weather. “I’ve got the facts … it will force change. I can’t let them continue dumping salt on the land.”

Stuffing another paper into his briefcase, Checkers reached for the old dinner jacket and tie he kept behind the door in case the lab’s brass brought official visitors from the Department of Energy.

“You can’t take on the entire oil industry, Jim.”

“Well, I’ll have to. I registered as a technical witness this time.” He brushed a stray hair from his eyes.

She watched him hurry out and shook her head. “They’ll kill you,” she said to the closing door. “I should know. I grew up in the oil patch.” She wished she hadn’t mentioned his wife.

JSB: All right, let’s roll up the ol’ sleeves. I am assuming this is going to be a thriller. Thus, the first thing that needs to change is the title. The Oil Patch Project sounds like a chapter from the annual report of a city council’s energy committee … or a children’s story featuring bunnies. Maybe it’s the world Patch (e.g., Sour Patch Kids). Anyway, it isn’t a compelling thriller title, so I suggest you review this post and come up with alternatives.

I don’t like the chapter title, either. This could be the subject of a whole post, but outside of juvenile lit I’m not a fan of giving titles to chapters. In any event, “Slinging Pebbles at Goliath” is confusing. David grabbed five smooth stones from a stream, suitable for killing. So if your hero is taking on the David role in this book, why is he only using pebbles? You may have an ironic meaning in mind, but it tripped me up. Do you really need it?

Then we come to the location/day stamp (we’ll get to the actual content soon, I promise!) I’m not against these, but I do think you need to be more specific. “A Monday in October” has me thinking, Wait, aren’tyou the author? How come you don’t know the date? I’d thus use “Monday, October 13” or just cut it and indicate the month in the text (if necessary).

We’re writing a thriller here, right? Titles and character names are crucially important. Don’t use the name Checkers. It sounds funny. A clown or a dog (see, e.g., Richard Nixon) might be named Checkers, but not the hero of a thriller.

Okay, let’s get to the content. I want to concentrate on two big areas. We can nitpick sentences here and there, but I’d rater you get your craft in order on these two items before you do anything else.

First is the dialogue. It’s expository. Review my post on the subject. You have the characters saying things not so much to each other as to the reader. In a few short paragraphs you’ve told us all about the high stakes. We need to see them, feel them, as they unfold for the main character. Don’t be in such a rush to tell us everything about a scene. Readers are patient if there is some real action and tension happening.

Don’t confuse the reader with wrong pronoun placement. You have:

“Jim, did it ever occur to you that you can’t save the world?” He stopped to listen.

That is Mattie’s line of dialogue, but you have Jim’s pronoun immediately following. No, no, never, never. It should be:

“Jim, did it ever occur to you that you can’t save the world?”

He stopped to listen.

Also, you have Mattie using Jim’s name three different times in this short segment. Once is enough.

Now on to the second problem—Point of View. The first two paragraphs are omniscient, with the author telling us about each of the characters in the scene:

Then we drop into Jim’s POV:

It was pleasant to be around Mattie...

But at the end, we switch to Mattie’s POV:

She watched him hurry out…

This is called “head hopping.” The effect on the reader is subtle confusion. Who am I supposed to care about? Whose story is it?

So here’s what I want you to do, author.

Don’t worry. Many, if not most, new writers struggle with POV. But once you get the hang of it, you’ll find it makes an almost magical difference in your writing. You can begin your studies right here at TKZ. Emeritus blogger Jodie Renner did a great series on POV a few years ago:

POV 101 – Get into Your Protagonist’s Head and Stay There

POV 103 – Engage Your Readers with Deep Point of View

Get a few novels by dialogue masters and see how they do it. Notice how tight their dialogue is, how there’s no rush to give out information, how it is consistent with their characters, and how it contains tension or conflict. Let me suggest Elmore Leonard and Robert B. Parker (1980s and 90s Parker) as exemplars. Perhaps others will have suggestions in the comments.

And for the definitive text on the craft of dialogue, I humbly suggest this one.

Don’t let this discourage you, author. Craft improvement is hard work. But the rewards are great. Study, write, get feedback, write some more. Do this for the rest of your life. You’re a writer, after all.

10 thoughts on “Mastering the Basics: Point of View and Dialogue”