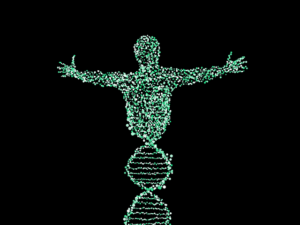 Image by Elias Sch. from Pixabay

A human with two different sets of DNA is called a chimera, and it’s more common than you might think. Most chimeras don’t even know they have this strange phenomenon going on inside them.

You could be a chimera, and so could I.

As we go along, take note of the interesting tidbits you could twist into a plot to add conflict.

Without any help from the scientific community, the process of becoming a chimera occurs naturally. Numerous books and movies explore chimerism using a killer who’s had a bone marrow transplant or blood transfusion. But are these characters based in fact?

Let’s take a look and find out.

What if we’ve never had a transplant?

Doesn’t matter. There are other ways to become a chimera.

Early on in pregnancy a mother can be carrying fraternal twins and one of the embryos might die in utero. The surviving embryo may absorb cells from the deceased twin. When the baby is born, s/he can have two sets of DNA. Since twin loss occurs in 21-30% of multiple-fetus pregnancies, think of how many chimeras could be walking around. Are the story wheels spinning yet?

It can also happen with a normal pregnancy.

In the 1990s, scientists discovered that a pregnant woman may retain some DNA from her baby, if fetal cells happen to migrate into her bloodstream and travel to different organs. The New York Times referred to this as a “pregnancy souvenir”— but it’s more scientifically known as “microchimerism.”

A 2015 study suggests this happens in almost ALL pregnancies (you read that right), at least temporarily. The researchers tested tissue samples from the kidneys, livers, spleens, lungs, hearts, and brains of 26 women who died while pregnant or within one month of giving birth. The study found fetal cells in all of the women’s tissues. The researchers were able to tell the fetus cells from the mothers by searching for Y chromosomes (only found in males). The deceased mothers were all carrying sons.

This is one way to use research to our advantage.

Remember, we’re thinking victim, not killer, which puts a different spin on it.

According to Live Science, fetal cells may stay in a woman’s body for years. In a 2012 study, researchers analyzed the brains of 59 deceased women ages 32 to 101. A shocking 63 percent had traces of male DNA from fetal cells in their brains. The oldest woman died at 94 years old, suggesting that these cells can sometimes last a lifetime.

The blood-brain barrier is the body’s defense system to block many drugs and germs in the bloodstream from entering the brain, but doctors have found this barrier becomes more permeable during pregnancy, which may explain how these fetal cells migrated into the brains of their mothers.

If you said the medical field, you’re not thinking outside the box.

Interestingly enough, 26 of the 59 women had no signs of brain disorders while alive. The other 33 were diagnosed with Alzheimer’s disease. The researchers found that women with Alzheimer’s were less likely to have male DNA in their brains than women without the disease.

Previous work on microchimerism suggested fetal cells might protect against breast cancer and aid tissue repair in the mothers, but could increase the risk of colon cancer. Microchimerism can also incite various autoimmune diseases. Autoimmune diseases occur when a person’s body is mistakenly attacked by its own immune system.

Past research suggested Alzheimer’s is more common in women who had a high number of pregnancies than in childless women. One of the limitations of this research is that the number of brains studied was relatively small. Other researchers involved with microchimerism want to explore what effects a mother’s cells might have in her offspring’s development and health.

Imagine all the different scenarios? Parts of your writer brain must be on fire by now. No? Then check this out …

Are you a chimera?

You may never know. Unless you wind up in a similar situation to a woman named Karen Keegan. In 2002, her story became a report in the New England Journal of Medicine after doctors told her that she wasn’t the biological mother of her children.

Imagine? Think of all the ways this one conversation could implode an MC’s life.

Turns out, the DNA in Karen Keegan’s bloodstream didn’t match the DNA in her ovaries. The doctors later determined she’d most likely absorbed a fraternal twin in utero.