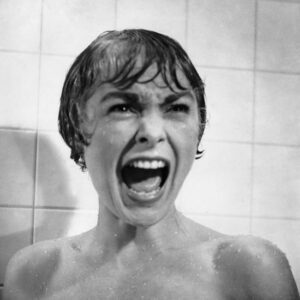 One of my great movie-going experiences was watching Psycho in high school in an auditorium during a storm. The place was packed. The mood was right. And at various points in the film people in the audience screamed their heads off, which greatly added to the atmosphere.

I’m glad my first exposure to the movie was not on TV. I got to see it uncut (which is more than we can say for Janet Leigh after the shower scene). But more important, I got the full effect of the suspense without commercial interruption.

When Vera Miles started walking toward the house, the audience shrieked. Most people were shouting Don’t go in there! Stop! NOOO! My skin erupted in a million pin pricks.

Of course, Vera didn’t listen. And it seemed like forever for her to get inside the place, and then down to the basement to meet, ahem, Mrs. Bates.

The screaming did not stop during the entire sequence. The anticipation was unbearable. The surprise-twist-climax actually changed my body chemistry. I didn’t sleep right for a week.

Which demonstrates why Alfred Hitchcock was called the master of suspense. What he did better than any other director was stretch the tension. He never let a thrilling moment escape with a mere whimper. He played it for all it was worth.

And so should fiction writers. Learning how to stretch tension is one of the best ways to keep your readers flipping pages, losing sleep and buying your books.

I first became aware of this a long time ago, when I was trying to learn to the craft. I’d read somewhere that Dean Koontz took his career up a notch with his novel Whispers. He has a scene early on, all inside a house, with a would-be rapist stalking the lead character. It goes for 17 pages!

How did he do it? Beat by ever-loving beat. Alternating action, thoughts, dialogue, description and more action. Each beat is played out in full. Almost like slow motion. Which is a good way to think about stretching tension. Focus in on each step in the scene and expand it. The expansion becomes story discovery, which is exactly what you want. You can always scale back the scene later, if you so desire.

Now, usually you’re going to find these high-tension places in the middle and toward the end of your novel. But don’t forget about the opening. And here I’m not just talking about mere action. I’m talking about a tense situation stretched to the limit.

If you’d like to see what I’m talking about, check out the first five chapters of one of Lee Child’s best, Gone Tomorrow. The tension starts on page one and stretches all the way to a shocking climax 26 pages later! Click on “Preview” below if you’d like to read it for yourself.

Try this: ID the three scenes in your manuscript with the highest degree of tension. Can you stretch them out even further? Can you add emotional beats? Inner thoughts? A memory? More action? Dialogue? Can you force the reader to read one, two or three more pages in order to find out what happens next?

Note: This is not in conflict with previous advice about writing tight. We are talking about adding beats which increase reading pleasure by delaying resolution of tension. Indeed, such beats should be the tightest writing in the book!

Comments may now commence. Shower at your own risk.

Speaking of tension, today I release a new story, a contemporary suspense with a twist ending. There’s room for you to hop on board! Details are on my Patreon page.