“There are three rules to writing a novel. Unfortunately, no one knows what they are.”

This quote is usually attributed to W. Somerset Maugham, and it’s been kicked around a lot over the years. There may, or may not, be some truth to it depending on your view, your experience, and your sense of humor. But there is something to the rule of three.

The rule of three is a staple in the writing world. It’s known by many names—the triple, the triad, the trebling, and the trilogy. The three-act structure of beginning, middle, and end is a prime example of the rule of three.

The rule of three suggests that a trio of events, characters, or phrases is more effective, satisfying, or humorous than other numbers. Think of the “walks into a bar” jokes. An Englishman, an Irishman, and a Scotsman or a brunette, a redhead, and a blonde.

The rule of three can apply to words, sentences, and paragraphs. It can be used to frame chapters, whole books, and a series of books. The three-rule also applies to poetry, oral storytelling, and films.

What got me going on the rule of three this morning was stumbling on a writing resource titled The Seven Basic Plots: Why We Tell Stories. It’s written by Christopher Booker and first published in 2004. Apparently, Booker worked on this book for thirty-four years. 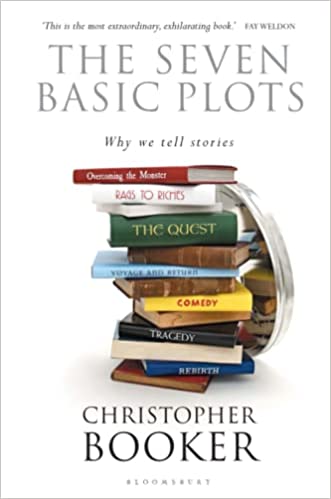 I’m going to quote from Mr. Booker’s book where he deals with the rule of three:

“The third event in a series of events becomes ‘the final trigger for something important to happen.’ This pattern often appears in childhood series like Goldilocks and the Three Bears, Cinderella, and Little Red Riding Hood. It also appears in adult works like Fiddler on the Roof, A Christmas Carol, and Shakespeare’s Julius Caesar.

1. The simple or cumulative three. For example, Cinderella’s three visits to the ball.

2. The ascending three where each event is more significant than the preceding. For example, the hero must first win bronze, then silver, then gold.

3. The contrasting three where only the third has positive value. For example, The Three Little Pigs—two of whose houses were blown down by the Big Bad Wolf.

4. The final or dialectical form of three. For example, Goldilocks and her bowls of porridge. The first is wrong in one way, the second is wrong in an opposite way, and the third is just right.”

I also stumbled upon a formula for the rule of three. This is often used in joke telling and comedy writing. It’s called the SAP test.

Let’s look at a joke by comedian Jon Stewart:

“I celebrated Thanksgiving in an old-fashioned way. I invited everyone in my neighborhood to my house, we had an enormous feast, and then I killed them and took their land.”

The rule of three appears so many times in so many ways that it’s barely noticed as a delivery technique. In the rule’s simplest form, outlined in Aristotle’s Poetics, it’s the classic beginning, middle, and end which is a time-proven structure. But think of all the times you’ve encountered the rule of three:

The truth, the whole, truth, and nothing but the truth.
Life, liberty, and the pursuit of happiness.
Reading, ‘riting, and ‘rithmetic.
Ready, aim, fire.
On your mark. Get set. Go.
Veni. Vidi. Vici.
Solid, liquid, and gas.
Three wishes.
Stop, look, and listen.
Snap. Crackle. Pop.
Blood, sweat, and tears.
Turn on. Tune in. Drop out.
Faster. Higher. Stronger.
See no evil. Hear no evil. Speak no evil.

What about you Kill Zoners? How often have you used the rule of three in your works? And can you add to the examples?