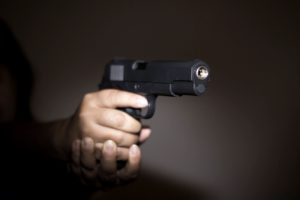 I have another first page critique. An anonymous author has submitted their first 400 words for critique at TKZ. It takes guts, folks. My feedback is below and please comment with your observations.

I levered the cork out of a bottle of Chardonnay and a bullet slammed into my back. Below the right shoulder blade. More to the center. That difficult spot where if you’ve got a rash or insect bite it’s impossible to scratch and not look like you’re having a spastic seizure. If I knew this was the night someone was out to kill me I would have brought something up from the cellar that was more unique than a domestic Chardonnay, even though it had a pleasant balance of oak to it. There was that Nieto Senetiner Malbec from Argentina, I was holding for a special occasion, for example.

Anyway, the chard went flying, the bottle hit my hardwood floor, didn’t break, the amber liquid flowed out. As for me, the impact of the slug jolted me forward. I tripped over my feet and did a full body slam on the deck.

There I was, face down, flat on a hard wood floor, my back hurt like hell and I heard heavy footsteps crunch their way over to me. We’re talking serious, heavy duty, outdoorsman leather soles here. All I was grateful for at this point is that I still wore my bullet proof vest from work. No, I’m not a cop, not a private dick sort of guy, no security guard, ex-military or something like that. I worked in a dentist’s officer. Name’s
Wowjewodizic, by the way.

I stayed still, bit the inside of my cheek to distract me from the pain in my back and waited. Waited for the, what’s it called, the ‘coup de – something or other,’ where the bullet enters the back of the skull and you don’t care where it goes next because you’re dead.

Then it occurred to me, this guy, or gal, probably not likely due to the heavy feet, didn’t use a silencer. This was a full on, make-a-lot-of-noise, gunshot. He wasn’t concerned about the blast drawing attention from the neighbors. Then again, my nearest neighbor was three miles away. And it was raining. It does that a lot in Portland, Oregon.

I levered the cork out of a bottle of Chardonnay and a bullet slammed into my back. Below the right shoulder blade. More to the center. That difficult spot where if you’ve got a rash or insect bite it’s impossible to scratch and not look like you’re having a spastic seizure.

The author voice detracts from any suspense. If the point is the humor, I would think a whole book would make it a challenge to get through, at least for me. I want a plot to follow and characters I care about when they’re in real danger. In suspense/mystery/thrillers, I prefer a more subtle use of humor. At the foundation of every story needs to be a solid plot with escalating stakes and conflict.

STICK WITH THE ACTION – The action of the protagonist getting shot is completely masked by the mental meanderings of the voice, making leaps between wines, insect bites, the gender of the shooter by how weighty the footsteps are, and Portland weather.

In this intro, there’s a seesaw effect of telling a bit of the story, then wading into a distraction of backstory or awkward asides told through the voice of the character. It gave me the feeling of constantly treading water until I’m exhausted, trying to figure out what the story is about. When distractions outweigh the plot, a reader can lose track of the plot and not finish a book.

SETTING – There’s very little setting written into this excerpt and it takes awhile for the reader to piece together where the protag is. A wine cellar is mentioned, but it’s not until the protag mentions “my hardwood floors” that the reader sees he could be at his home. There are subtle ways to add setting without hindering the pace if the descriptions are part of the action. As a reader, I like to get a feeling for setting in books I enjoy.

LINES BEST USED IN DIALOGUE – The line below is an example of how the author could have stuck to the action of the shooting, yet gotten the humor across through dialogue with another character. Witty repartee with a detective, for example, would allow the author to pepper in humor without overdoing it.

If I knew this was the night someone was out to kill me I would have brought something up from the cellar that was more unique than a domestic Chardonnay, even though it had a pleasant balance of oak to it.

FIRST PERSON/GENDER & RAMBLING NARRATIVE – It’s not until this line (toward the end of the 3rd paragraph) that the reader knows the protag is a man–only 3 words. As a practice, I like to get the gender straight at the start whenever I write first person. I love the intimacy of that voice, but there are challenges to it. In the case of this excerpt, I think the author absolutely listened to the protag and wrote down every word they heard in their head, but in first person, you have to direct the action and what you want revealed about your character. It’s too tempting to ramble away from the plot.

No, I’m not a cop, not a private dick sort of guy, no security guard, ex-military or something like that.

RUN ON SENTENCES – I found these sentences hard to follow and the punctuation bothered me. I understand the need to write quicker thoughts in an action scene, but I don’t consider this an action scene with all the asides and random thoughts that detract from the flow. The author might consider breaking these sentences apart. Rather than one long sentence, it could make the writing flow better and improve the natural cadence.

There I was, face down, flat on a hard wood floor, my back hurt like hell and I heard heavy footsteps crunch their way over to me.

REALISM – I found it unbelievable that the protag would lay there and wait for the shooter to finish the job, while he’s trying to figure out ‘coup de – something or other,’ determine what gender has heavier footfalls, whether the shooter used a silencer, and the rainfall in Portland, Oregon.

TYPO – Unless this is an obscure job I’ve never heard of, ‘officer’ should be ‘office.’

I worked in a dentist’s officer. 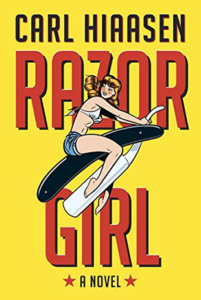 USE OF HUMOR IN BOOKS

Many authors use humor in their suspense thrillers in various ways: Stephen King, Dean Koontz, Janet Evanovich, Harlen Coben, Lawrence Block, Robert Crais, Elmore Leonard, John Sanford, to name a few. There are countless more who have found ways to add humor to their books. I’ve added an excerpt from one of Carl Hiaasen’s stories below. He and Janet Evanovich tip the scale more toward humor than suspense, but have developed a great balance and a loyal reader following.

On the first day of February, sunny but cold as a frog’s balls, a man named Lane Coolman stepped off a flight at Miami International, rented a mainstream Buick and headed south to meet a man in Key West. He nearly made it.

Twenty-seven miles from Coolman’s destination, an old green Firebird bashed his car from behind. The impact failed to trigger the Buick’s airbags, but Coolman heard the rear bumper dragging. He steered off the highway and dialed 911. In the mirror he saw the Firebird, its grille crimped and steaming, pull onto the shoulder. Ahead stood a sign that said: “Ramrod Key.”

Coolman went to check on the other driver, a woman in her mid-thirties with red hair.

What the hell happened?”

“Just a nick. Barely bleeding.”She held her phone in one hand and a disposable razor in the other.

“Are you out of your mind?” said Coolman.

The driver’s jeans and panties were bunched around her knees. She’d been shaving herself when she smashed Coolman’s rental car.

“I got a date,” she explained.

“You couldn’t take care of that at home?”

“No way! My husband would get so pissed.”

In this example, Hiaasen puts his serious minded characters in outlandish situations using his tongue in cheek humor to allow things to play out. He sticks with the action of a car crash (the disturbance) until the reader finds out what caused the wreck. The dialogue lines are funny, too. The humor is downplayed and yet very present and fluid. It’s how Hiaasen sees his story unfolding. His use of humor is subtle and becomes a thread that holds the story together and creates his author voice. The idea of placing very earnest characters into a complete farce, and yet allow them to confront things in a serious-minded way, it adds an element of the absurd that becomes funny.

1.) Add a funny character, whether it’s the protag or a secondary character.

2.) Have your serious-minded characters confront absurd and escalating situations without seeing the humor themselves. They are facing life or death. Only the reader gets the joke.

3.) Know how to separate or add humor into a suspense/action scene. I recently wrote a scene where I didn’t expect there to be humor. My hero is in a shootout but he gets a cell phone call from a girl. What does he do? I wrote the scene all action, then came back to add in the moments where I thought he might realistically answer that call, without him looking silly or stupid. It gave insight into him and added unanticipated humor to a tense scene. I also underplayed the phone call and made it seem normal, until you see what he’s doing while he’s talking to her.

4.) Throw in the unexpected. Imagine your serious character getting jolted by something he or she never saw coming. How would they handle it?

5.) Develop witty banter between characters in conflict or dare to write characters with different kinds of humor. Pit an educated cynic up against someone with crude bathroom humor in a juxtaposition of character types. You’ll find these characters take on a life of their own in your head and it’s lots of fun to write. Making each voice distinctive in humor is key.

What do you think of the anonymous submission, TKZers? Any feedback?