It’s my pleasure to introduce someone I’ve known for a long time, an Okie friend. I first knew Ken Raymond of The Oklahoman newspaper as a crime beat and features reporter. He is a talented author as well. After he graced me with a glimpse of his work, I’ve been trying to coerce him to write a novel ever since and hope he does one day. Very talented guy. Now he’s the book review editor at the paper, a man of many hats. Please chat Ken up, TKZers.

P S – I will be traveling and in remote spots this week. I may not have access to the internet, but I will try to check in on post day.

Last year I interviewed David Sedaris, the humorist renowned for essays such as “Santaland Diaries,” a hilarious chronicle of his days working as an elf at Macy’s one holiday season.

We didn’t have much in common, aside from our mutual appreciation of his work, but we both love books … and we share a similar problem.

Whenever Sedaris makes a public appearance, would-be authors thrust their manuscripts at him. He’s not sure why, but he thinks they hope he will read all the books, pass them on to his editors and launch the writers’ book careers.That never happens. Sometimes he says no to the manuscripts; other times he takes them out of a sense of politeness and civility.

Even if he wanted, he could never find time to read them all.

I’m not famous. I don’t make many public appearances, and when I do, they’re usually at writing conferences or classrooms. But I do get buried in books, most of them unsolicited. Dozens pile up outside my front door each week, and more still find their way to what used to be my office.

Who am I? I’m just the book editor for The Oklahoman newspaper in Oklahoma City. Book editor sounds important, but really I’m just one guy who reads and reviews books and tries to convince other people to do the same. My staff, such as it is, consists of volunteer newsroom staffers and a handful of stringers, whose only recompense is a byline and a free book. I interview authors, write about industry trends and work hard to deliver the best possible product, but I’m also a columnist and senior feature writer. There are only so many hours in the day.

Don’t get me wrong: I love my job. I’m among the fortunate few in this world who are paid to read books. The problem is that there are just so many of them, good and bad, in all genres and styles.

Given all that competition, how can you make your book stand out — to me and to the countless other reviewers out there?

There’s no guarantee of success, but these tips may help:

For some reason, no one wants to come across as a beginner in the writing business. I guess everyone assumes that if they’re not all polished and shiny, they won’t stand out.

Me, I’m sick of flashy. I get hundreds of emails a week from authors or publicists, and sometimes from authors pretending to be publicists. The messages are so flashy they look like old Geocities websites, with weasel words thrown in to make it seem as if the books they’re pitching are the biggest thing to hit literature since the Gutenberg Bible. Read them closely, though, and they’re largely unappealing campaigns of self-aggrandizement.

I prefer a simpler approach: the truth. Don’t try to impress me; your book should do that. Your emails should tell me who you are, what you’ve written and why you think it stands out. Talk to me like we’re eating lunch together, and I’ll listen.

I’ll also tell you what I tell everyone these days. I can never promise coverage, but I’ll give you the same chance at a review that every other author gets, including the famous ones. I’ll look at your book, and if it’s not for me, then I’ll offer it up to my review team. If anyone picks it and thinks it’s pretty good, I’ll run a review. If they don’t like it, I probably won’t run a review.

If you apply for a job, odds are you won’t sit by the phone for two weeks, hoping it’ll ring. Instead, you’ll follow up a few days after the interview, letting the company know you’re interested and making sure you’re remembered. You may follow up again a week later.

The same goes for book promotion. Often someone will pitch a book to me, and I’ll ask for a review copy. By the time the book arrives in the mail, I may not remember it at all; I’ve dealt with a bunch of other books in the interval.

A simple follow-up email reminds me that we communicated about the book. It tells me that I was interested enough to request it. It’ll make me take a closer look.

Nothing turns me against a book more than an argumentative author. Earlier this year, a guy blitzed me with phone calls and emails, demanding that I review his minor book about his favorite subject: himself.

Somehow he had browbeaten other news organizations into writing reviews, none of which were particularly flattering. When his berserk behavior persisted, I told him I wasn’t interested in interviewing him or reading his book. He promptly called my boss eight times in a two-hour period and drowned him in email.

He seemed shocked, absolutely shocked, that he couldn’t force his way into the paper.

I don’t want to be a puppet. Most people don’t seek out needless confrontation. If we all act professionally, we should get along fine, even if I can’t get to your book or publish a review. I bear you no ill will; without you, I couldn’t do my job.

Major publishers release fewer books during the cold weather months. The spring, summer and fall are all pretty hectic, so those winter months are your best opportunity to contact me. You simply won’t have as much competition.

At the same time, I scramble for content around that time of year. I suspect others in my position do, too. I start pushing gift books on Black Friday and continue every week until Christmas. Even if your book came out much earlier in the year, I may use it in one of my gift guides. I generally offer a range of books in different genres.

But winter isn’t your only window. Whenever possible, people like me prefer to publish reviews proximate in time to book release dates. If I could, I would limit most of my reviews to books that are about to come out in a couple days.

In order for that to happen, I need your book about a month in advance. Some critics prefer digital copies; I like physical books, even if they’re uncorrected page proofs.

Because I am in Oklahoma, I take special interest in books with some sort of Oklahoma ties. If you live here, went to college here, set your book here, whatever, that’ll up your odds of getting reviewed. The same applies to other regional newspapers. If you’re in Alaska, pitch your book hard to Alaskan publications.

Set up book signings, too. You probably won’t get rich at a book signing, since stores take part of the haul, but I always mention local book signings in print. Many other papers do the same. It may not be as good as a full review, but at least it gets your name out there.

Best of luck, and please contact me about your upcoming books. The best way to reach me is via email at kraymond@oklahoman.com. Follow me on Twitter at @kosar1969.

Discussion: Any questions for a book review editor, TKZers? You ever wonder what a crime beat reporter sees on the job? Or maybe you want to know what was the strangest features article Ken ever wrote? Ask away! 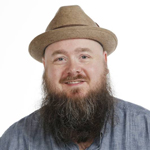 Bio:
Ken Raymond is the book editor and a senior writer at The Oklahoman. He publishes a monthly column called “Purely Subjective.” A Fulbright scholar and Pennsylvania native, he covered crime for much of his career, bringing dramatic stories to life through literary nonfiction. He has won numerous national, regional and state awards. Three times he has been named Oklahoma’s best writer by the Society of Professional Journalists. He lives in Edmond with his wife, three Italian greyhounds and a Chihuahua.