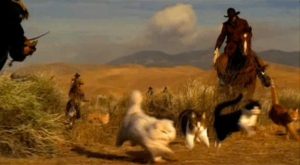 We all know that getting a reader inside a lead character’s head is one of the keys to compelling fiction. But it has to be done seamlessly so it doesn’t jerk us out of the narrative and put a crimp in the fictive dream.

Which means we have to learn to handle what I call “Character Alone Thinking Scenes” (CATS) in a deft manner.

The first issue is whether to begin the book with a CATS. As last Wednesday’s first-page critique demonstrated (in my view, at least) the answer should almost always be No.

Why? Because we have to have a little personal investment in someone before we can care deeply about their feelings.

Imagine going to a party and you’re introduced to a fellow with a drink in his hand. You say, “How are you?” and the guy says, “I’m really depressed, man, I wake up every day and the room looks dark and the sun never shines, even though it’s out there, and I don’t see it because of the dark dankness in my soul, and life has lost its meaning, its luster, whatever it was it once had for me when I was young and ready to take on the world. Ya know?”

Well, the beginning of a book is like walking into a party. The reader wants to meet interesting people. And interest is aroused by what people do. The way you catch readers from the start is through action and disturbance, not feeling and expounding.

I can’t tell you the number of manuscripts I’ve read over the years that did not begin with a real scene, but instead opted for the inside of a character’s head. What I usually do in such cases is flip the pages until I get to some dialogue, because that automatically means we’re in a scene. And 98% of the time that is the best place to start. (Sure, an argument can be made that a great style might be enough to carry the opening pages. But it better be truly great and truly brief.)

So, re: the opening—save your CATS for later.

Once you’re into the novel there are two types of CATS to herd—active and reactive.

In an active scene, the character is alone but with a major scene objective (something that materially relates to the plot), and thinks while trying to overcome whatever scene obstacles are in her way.

In a reactive scene, the character is alone with a chance to reflect. She may be thinking about what’s already happened in the story, or her current psychological state, or the other characters. When done well, reactive scenes strengthen our emotional bond with the character.

A couple of examples. The first is from Dean Koontz’s Intensity. A young woman named Chyna Shepherd is thrust into the dark world of serial killer Edgler Vess. After Vess murders a family (not knowing Chyna is in the house, too) Chyna sneaks into his motor home in the hopes of saving her best friend, whom Vess has dumped there. Alas, she’s dead. But it gets worse. Vess starts driving away and Chyna is trapped in the back of the motor home.

Her objective now is survival. She must keep her presence in the vehicle a secret, find an adequate weapon, and somehow kill or disable Vess. As she looks for a weapon she makes a grisly find—the body of a young man hanging in the small closet, his eyes and mouth sewn shut.

She pulled shut the pleated-vinyl panel. Though flimsy, it moved as ponderously as a vault door. The magnetic latch clicked into place with a sound like snapping bone.

In all the textbooks she had ever read no case study of sociopathic violence had ever contained a description of a crime sufficiently vivid to make her want to retreat to a corner and sit on the floor and pull her knees against her chest and hug herself. That was precisely what she did now – choosing the corner farthest from the closet.

She had to get control of herself, quickly, starting with her manic breathing. She was gasping, sucking in great lungfuls, yet she couldn’t seem to get enough air. The deeper and faster she inhaled the dizzier she became. Her peripheral vision surrendered to an encroaching darkness until she seemed to be peering down a long black tunnel toward the dingy motor-home bedroom at the far end.

She told herself that the young man in the closet had been dead when the killer had gone to work with the sewing kit. And if he’d not been dead, at least he’d been mercifully unconscious. Then she told herself not to think about it at all, because thinking about it only made the tunnel longer and narrower, made the bedroom more distant and the lights dimmer than ever.

She put her face in her hands, and her hands were cold but her face seemed colder. For no reason that Chyna could understand, she thought of her mother’s face, as clear as a photograph in her mind’s eye. And then she did understand.

To Chyna’s mother, the prospect of violence had been romantic, or even glamorous. For a while they had lived in a commune in Oakland, where everyone talked of making a better world and where, most nights than not, the adults gathered around the kitchen table, drinking wine and smoking pot, discussing how best to tear down the hated system, sometimes also playing pinochle or Trivial Pursuit as they discussed the strategies that might bring utopia at last, sometimes far too enraptured by revolution to be interested in any lesser games …

Koontz then gives us a page-and-a-half of backstory, filtered through Chyna’s perceptions and thus relevant to the present action. She’s alone, but moving toward her scene goal. Her thoughts—which in real time would flash through her mind but in fiction time are detailed—are part of the action. 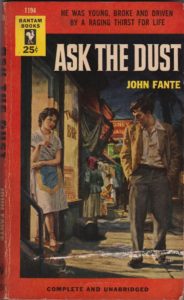 Now let’s take a look at a reactive CATS. This is from John Fante’s classic Ask The Dust. Arturo Bandini is a young writer living a meager existence in L.A. He has just decided to he’s going to steal milk off a truck. In his dingy hotel room, he reacts to his decision:

The night came reluctantly. I sat at the window, rolling some cigarets with rough cut tobacco and squares of toilet paper. This tobacco had been a whim of mine in more prosperous times. I had bought a can of it, and the pipe for smoking it had been free, attached to the can by a rubber band. But I had lost the pipe. The tobacco was so course it made a poor smoke in regular cigaret papers, but wrapped twice in toilet tissue it was powerful and compact, sometimes bursting into flames.

The night came slowly, first the cool odor of it, and then the darkness. Beyond my window spread the great city, the street lamps, the red and blue green neon tubes bursting to life like bright night flowers. I was not hungry, there were plenty of oranges under the bed, and that mysterious chortling in the pit of my stomach was nothing more than great clouds of tobacco smoke marooned there, trying frantically to find a way out.

So it had happened at last: I was about to become a thief, a cheap milk-stealer. Here was your flash-in-the-pan genius, your one-story writer: a thief. I held my head in my hands and rocked back and forth. Mother of God. Headlines in the papers, promising writer caught stealing milk, famous protégé of J. C. Hackmuth haled into court on petty theft charge, reporters swarming around me, flashbulbs popping, give us a statement, Bandini, how did it happen?

The scene continues, with Bandini eating an orange, doing some typing, all the while thinking about his prospects as a writer. The chapter ends with Bandini making the milk snatch, giddily bringing the two bottles back to his room, opening one and taking a long drink. And immediately spitting it out. He’d stolen what he hated—buttermilk.

There should be activity in a reactive CATS. It is often innocuous (rolling cigarettes, eating oranges, typing) but it provides the space for emotion and analysis.

The big thing to know about CATS is that they are the best way to control pace. If you need to slow things down a bit, give us more thinking. If you need to pick up the pace, compress the thoughts.

In other words, learn to herd your CATS and the readers will lap up your fiction.