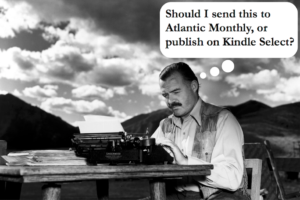 I love a good short story. When done right, it can lay you out emotionally, delight you, scare you, make you think, or some combination of the above. All in under 7,000 words.

Some of my best reading experiences have been short stories. Off the top of my head I see:

“The Short Happy Life of Francis Macomber” by Ernest Hemingway.

“The Eighty-Yard Run” by Irwin Shaw.

“Chapter and Verse” by Jeffery Deaver.

“The Veldt” by Ray Bradbury.

All the stories in My Name is Aram by William Saroyan.

“The Ledge” by Stephen King.

When I was in college, I got into a workshop with one of the masters of the short story, Raymond Carver. What I learned was this: I couldn’t write like him. Or Hemingway. Or Saroyan. And I could not figure out the craft of the story. I was discouraged. I wish I’d known what Ray Bradbury was about to say in his Paris Review interview: “You can’t learn to write in college. It’s a very bad place for writers because the teachers always think they know more than you do—and they don’t. They have prejudices. They may like Henry James, but what if you don’t want to write like Henry James?”

A couple of decades later I became a published novelist. Short stories remained elusive to me. But I still wanted to write them. Eventually, I went looking for some sort of key to the craft of short story writing. It took me a long time, but I finally found it. 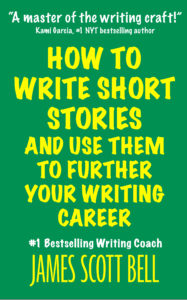 Naturally I had to write a book about it.

This book covers my theory of this “master key,” and goes on to suggest strategies for using short stories to help you with your long-term career goals. The book also has five complete stories for your analysis, including the aforementioned “Chapter and Verse” (with the kind permission of Mr. Deaver).

Today I want to talk about two often overlooked reasons for writing the occasional short story. The first reason is, simply, that they’re fun. Lawrence Block, one of the grand masters of crime fiction––short and long––says in The Liar’s Companion: A Field Guide for Fiction Writers:

I figured short stories would be fun. They always are. I think I probably enjoy them more than novels. When they go well, they provide almost immediate gratification. When they go horribly hopelessly wrong, so what? To discard a failed short story is to throw away the work of a handful of hours, perhaps a couple of days. In a short story I can try new things, play with new styles, and take unaccustomed risks. They’re fun.

Why should you sometimes write just for fun? I’m glad you asked:

Now, “fun” does not mean you’re just writing fluff. Far from it. Which leads me to the second overlooked reason for writing short stories: to deepen your intensity. Once again, Bradbury:

[T]he problem of the novel is to stay truthful. The short story, if you really are intense and you have an exciting idea, writes itself in a few hours. I try to encourage my student friends and my writer friends to write a short story in one day so it has a skin around it, its own intensity, its own life, its own reason for being. There’s a reason why the idea occurred to you at that hour anyway, so go with that and investigate it, get it down. Two or three thousand words in a few hours is not that hard. Don’t let people interfere with you. Boot ’em out, turn off the phone, hide away, get it done. If you carry a short story over to the next day you may overnight intellectualize something about it and try to make it too fancy, try to please someone.

Writing a short story this way sharpens your ability to concentrate, and also teaches you to bring intensity to the writing of scenes. Since scenes are the building blocks of your novels, that’s all to the good for your overall craft toolbox.

And so I have launched How to Write Short Stories And Use Them to Further Your Writing Career. The e-version may be found here:

A print version is available via Amazon or Barnes & Noble

In last week’s post, I asked you about books that may have brought solace to you at a point in your life. Can you think of a short story that had a similar impact? Was it memorable in other ways? Who is your favorite short story writer?

And have you tried your hand at the short story? What’s been the result?