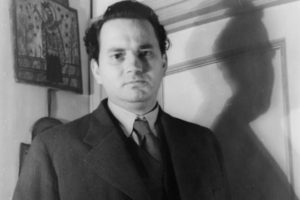 I have a good friend who’s a college English prof. He’s an expert in American Lit, with a specialization in Thomas Wolfe. I made some attempts to read Wolfe back in college, but quickly got over it in favor of his contemporary, Ernest Hemingway, and one of his heirs, Jack Kerouac.

But I’ve long had it in my mind to give Wolfe another try. What stopped me was the steep decline in his literary reputation over the past fifty years or so. No less a literary light than Harold Bloom considers Wolfe a “mediocre” talent who has no (as in zero, zilch) “literary merit.”

Now there is a major motion picture out about Wolfe and his editor, the legendary Maxwell Perkins. The movie (which I have not seen yet) is called Genius, based on A. Scott Berg’s award-winning book about Perkins.

So it seemed like a good time to break out my old copy of Look Homeward, Angel and try again. Almost immediately I got frustrated. There is a lot of prose (Wolfe once admitted that his great fault was “too-muchness.”) that is mostly narrative summary. I knew this was supposed to be a novel about a boy named Eugene Gant. But I was not picking up any reason to care about Eugene, the Gants, or the town of Altamont where everything takes place.

After about 150 pages I sent an email to my friend, asking him what I was missing. He sent me a paper he’d done for a conference on how we should approach Wolfe. Wolfe was not interested in writing a traditional novel with an identifiable plotline, my friend explained. Wolfe was, rather, writing to immerse us in a world. He wants us to live there, experience moments and settings. He wants us to feel life deeply even through mundane details.

Okay, that helped. I’m fine with experimental fiction. But in the nitty-gritty of Wolfe’s words I often stumble and grab the dictionary for support. Here, for example, is a clip from a section where Eugene Gant wakes up in the morning and gets dressed:

With sharp whetted hunger he thought of breakfast. He threw the sheet back cleanly, swung in an orbit to a sitting position and put his white somewhat phthisic feet on the floor. Standing up tenderly, he walked over to his leather rocker and put on a pair of clean white-footed socks. Then he pulled his nightgown over his head, looking for a moment in the dresser mirror at his great boned structure, the long stringy muscles of his arms, and his flat-meated hairy chest. His stomach sagged paunchily. He thrust his white flaccid calves quickly through the shrunken legs of a union suit, stretched it out elasticly with a comfortable widening of his shoulders and buttoned it. Then he stepped into his roomy sculpturally heavy trousers and drew on his soft-leathered laceless shoes….

I found myself talking to Wolfe. “C’mon, Tom, really? Phthisic feet? WHAT DOES THAT EVEN MEAN?”

I looked up phthisic. It means a “wasting disease” like tuberculosis.
“Tom! Are you telling me Eugene’s feet had a lung disease? Can feet even look tubercular? Why are you making me stop to think about all this?”

A few pages later Wolfe writes about nacreous pearl light. Back to the dictionary! And guess what? Nacreous means pearly. So it’s not just a ten-dollar word, but I think Wolfe used it redundantly.

And then there are times when Wolfe pops in with author intrusion. To be fair, that’s part of his experiment. But we have things like this: The seed of our destruction will blossom in the desert, the alexin of our cure grows by a mountain rock, and our lives are haunted by a Georgia slattern because a London cut-purse went unhung.

Back to the dictionary! Alexin? (n., a defensive substance capable of destroying bacteria.)

But then … what does that passage even mean?

One more: Eugene got back his heart. He got it back fiercely and carelessly, with an eldritch wildness.

Good thing I had the dictionary right next to me! Eldritch, adj., weird; eerie.

Come on, Tom! Why do you do this? Why do you slatternly drive the alexin of phthisic prose eldritchly before my white-footed socks?

Yet in deference to my friend, I’m going to darn well finish Look Homeward, Angel. But I have to say it ain’t easy.

Does that mean I only prefer books with stripped-down style?

Far from it. I do want some style, some voice. But I want it the way John D. MacDonald described it: unobtrusive poetry.

It’s sort of like actors. I’ll confess: I’ve never been a big fan of Laurence Olivier. I always feel like I’m watching an actor working a bit too hard. I admire the craft, but I see the craft. I never feel that way about, say, Robert Mitchum. Mitchum’s performances always look easy. Which is why he is often underrated as an actor. 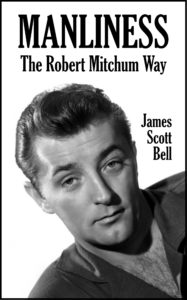 Mitchum actually had a terrific range. He could be cool (Out of the Past), vulnerable (Heaven Knows, Mr. Allison), menacing (The Night of the Hunter), scary (Cape Fear), funny (What a Way to Go). He could be a man of the West (El Dorado), a man of the cloth (5 Card Stud), or a man after a girl’s heart (Holiday Affair). [Also, I find that Mitchum movies have a great deal to say about true manliness, lessons we need to recover. So much do I believe this that I wrote a little book, Manliness: The Robert Mitchum Way.]

How does all this translate to your writing?

Now, I don’t want to leave poor Thomas Wolfe hanging out there with Harold Bloom sauce all over him. The guy was in love with writing. It was his life. I can’t deny his passion. So I’ll give him a fair hearing. But when I’m done with Look Homeward, Angel I have a feeling I’ll want to crack open a Travis McGee.

So are there books out there you’ve tried to like, but can’t? You don’t have to name names **COUGH**Middlemarch**COUGH**, but tell us why the book didn’t work for you. 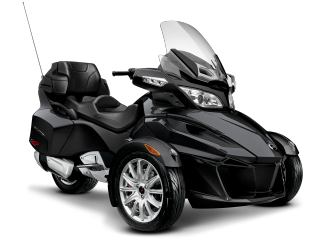