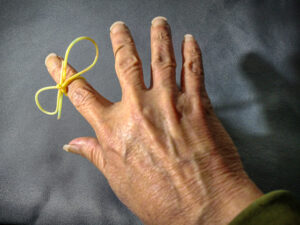 When you read a novel, do you like occasional reminders? Recently, I discussed these questions with author/editor Karen Albright Lin. Karen is currently reading my WIP, Until Proven Guilty, book #7 in my Tawny Lindholm Thriller series.

Speaking as an older reader with termites eating holes in my memory, I need reminders. Most of the time, I read a novel in bed and fall asleep after a few pages. Days may pass before I pick up the book again.

In stories with many characters, POVs, and plot lines, I get lost and need to scroll backward to review. Who are these people? How are they connected? When and where is the story taking place? What just happened?

My readers are generally older and probably have similar memory lapses. Because of that, as a writer, I make a conscious effort to include small reminders to ground the reader at the beginning of each new scene and chapter.

Authors often leave a character hanging on the edge of a cliff, particularly in thrillers. In the next scene, they jump-cut to a different character in a different place and time. Three or four scenes later, they return to the poor hanging character. At that point, I appreciate a brief reminder of how and why the character wound up in that situation.

Reminders are also helpful for secondary characters who are offstage much of the time. When they reappear, in addition to their names, I usually mention their role or function.

A minor character, Mavis Dockerty, appears only three times in Until Proven Guilty—in chapters 1, 18, and 32.

She’s first introduced during a preliminary hearing on page 2, questioning a rape victim in what should be a slam-dunk prosecution:

County Attorney Mavis Dockerty said, “Take your time.” She picked up a box of tissues from the prosecution table and handed it to Amelia.

A few pages later, Mavis’s airtight case against the rapist is destroyed by defense attorney Tillman Rosenbaum, the male lead.

Mavis doesn’t appear again for 150+ pages and could be forgotten by some readers. So, I reintroduce her on page 166:

Flathead County Attorney Mavis Dockerty was sitting by herself in the last row of Courtroom #2 when Tillman tracked her down.

She appears for a final time on page 287:

County Attorney Mavis Dockerty was doggedly determined not to lose twice against the rapist Claude Ledbetter. Her evidence at his second preliminary hearing was flawless and overwhelming, every possible loophole sewed up tight.

But when do reminders turn into repetition?

Back to my discussion with Karen. In my manuscript, she made many notes where she thought I was being repetitive. She advised: “Trust the reader to get it the first time.”

My initial reaction was Really? Nah, I don’t repeat myself.

Writers can’t see their own flaws. That’s why we depend on critique groups, beta readers, and editors to point out problematic trees amid the dense forest of our novels. I trust Karen’s sharp eye and savvy skills as an editor so I took a closer look.

What I found was shocking. Here are a few examples:

One hint the writer is being repetitive is when the reminder appears three times in two paragraphs.

In the following passage, protagonist Tawny is experiencing empty-nest syndrome. She loves her husband’s three children from his previous marriage but they’re away at school or traveling. Her own son Neal is in his mid-thirties, in the military, and is home for a rare visit.

She’d already had one disappointment, when Neal declined to stay in the beautiful, sprawling, ranch-style house that Tillman had bought when they married because it had enough bedrooms for all their kids. Instead, Neal opted to sleep at Tawny’s creaky old bungalow in the historic district—the home where he’d grown up and still felt comfortable.

The hollow bedrooms of the new house sometimes made Tawny melancholy. Occasionally Tillman’s two daughters and his son came for weekend visits but otherwise the rooms stayed empty. But that was the way with grown children.

Did you get the picture of the vacant bedrooms?

Based on Karen’s suggestions, the first paragraph stayed the same but the second now reads:

The hollow bedrooms of the new house sometimes made Tawny melancholy, wishing Tillman’s two daughters and his son visited more often. But that was the way with grown children.

In another example, Karen noted that the location of a coffee kiosk had been repeated. In that instance, since there were only a couple of mentions, with many pages in between, I did not take her suggestion because it seemed like a reasonable reminder that wouldn’t bug readers.

The bigger problem is how to express themes without being repetitive. That’s where Karen busted me big time.

Until Proven Guilty weaves together three plots, each showcasing a different perspective in the tug of war between the law and justice. The first involves a clearly guilty character who walks free; the second addresses an innocent character who’s wrongly imprisoned; the third shows the perils of presuming guilt without proof.

The two protagonists, Tawny and Tillman, are married, work together, and clash over their different beliefs. Tawny is an idealist who wants justice for crime victims. Tillman is sometimes a righteous crusader but he’s also a cynical, pragmatic attorney whose job is to vigorously defend his clients whether they’re guilty or not.

At the start of the story, Tillman destroys County Attorney Mavis Dockerty’s case against an accused rapist because of faulty evidence. Tawny didn’t know Tillman’s plan before the hearing and is shocked and dismayed that the accused rapist is set free.

As they walk from the courthouse back to the law office, she confronts Tillman:

Tawny looked up at him. “Why didn’t you tell me?”

His deep, rumbling baritone rose above traffic noise. “So you could distract me with a lecture about right and wrong, good and evil?”

“You know he’s guilty,” she said. “The judge practically said so.”

His dark gaze, half sexy, half scary, pinned her. “The cops botched the evidence collection. The crime lab mishandled the DNA samples. It’s not my responsibility to help the county attorney prove her case. It’s full of holes bigger than the Berkeley mine pit.”

“But he’s guilty,” Tawny repeated. “He assaulted that poor woman. That doesn’t bother you?” She dearly loved her new husband but sometimes she didn’t like him very much.

Tillman stopped in the shade of a maple tree overhanging the alley behind the office. “I did my job, Tawny. That’s how the system is set up. Presumed innocent until proven guilty. Mavis didn’t prove Ledbetter guilty. And the fee Ledbetter paid me allows me to take on more pro bono cases.”

He didn’t say “like yours” but the unspoken words hung heavy in the late summer air.

A scene follows at the law office where Tawny expresses her indignation to a coworker:

A new headache settled behind Tawny’s eyes, the pressure making them feel like they were bulging. “When the judge threw the case out, that poor woman was crushed. Her husband looked ready to peel off Ledbetter’s skin and dunk him in alcohol. I wouldn’t blame him if he had.”

Then she thinks even more about it:

Tawny knew the system. Yet, in cases like Ledbetter’s, her conscience chafed. What about the victim’s right to justice?

A few pages later, on their way home:

Tillman said, “If you wanted a lawyer who represents only innocent people, you should have married Perry Mason. This is how the system works. What can be proved versus what can’t be, what evidence is admissible versus what isn’t. I use the law as it’s written to defend my clients.”

Tillman was hard to argue with. That’s why he was so good.

Tawny couldn’t think of a rebuttal.

A heavy silence hung over the rest of the drive home.

Then, at home, they talk more about the case:

“You’re such a Pollyanna,” he murmured but without his usual sardonic tone.

“It’s not a justice system, Tawny. It’s a legal system. Right and wrong, good and evil. None of that comes into play.”

In the first 15 pages of the book, I repeat the theme five different times.

Didja get it? Sure you got it? Are you positive? Just in case, let me smack you over the head with a two-by-four.

The author’s personal beliefs are bleeding all over the story.

That refrain echoed through the rest of the manuscript as Karen observed over and over that I was beating the same drum. By page 188, her understandable frustration was showing: “This drum has been beat until there’s a hole in it.”

Therein lies my dilemma. Three different plots share the same theme but are seen through contrasting lenses by various POV characters. How does a writer show multiple perspectives yet avoid being repetitive? How do I keep my obvious bias in check?

Through the book, the running argument between Tawny and Tillman escalates. It ultimately leads to a crisis in their marriage. 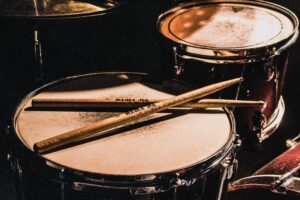 How the heck do I show that important plot arc without beating a hole in the drum?

Right now, I’m going through page by page with Karen’s cautions in mind. I have to decide when reminders become repetitious and cut those parts.

Sometimes I can combine several references into a single one that makes the point.

I’m trying to reserve dialogue about theme for the most important pivotal scenes.

Karen says, “Trust the reader to get it the first time.”

She’s right but, oh, it’s a struggle to restrain my drumstick.

TKZers: As a reader, how do you feel about reminders?

Do you sometimes want to tell the author enough is enough already?

As a writer, how do you incorporate reminders?

Do you catch yourself making a point until it becomes repetitious? 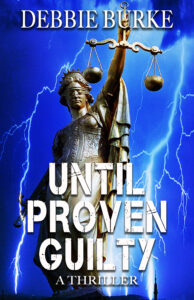 Receive a FREE BONUS Short Story when you sign up for my newsletter at debbieburkewriter.com.

You’ll also be among the first to hear when Until Proven Guilty is published.

45 thoughts on “Reminder or Repetition?”