Weather … or Not?
Terry Odell 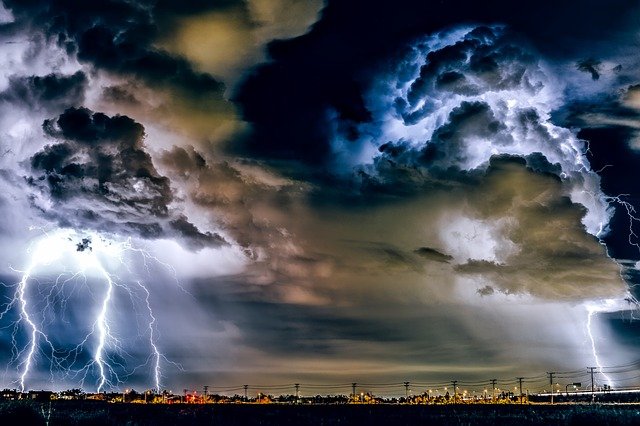 Image by David Mark from Pixabay

Not long ago, James Scott Bell talked about using setting to create conflict, and I mentioned including weather as well.Weather can be used to set the mood, be a portent of things to come. We attribute human emotions and behavior to the weather with things like whispering winds and sullen clouds. (Points if you know the term for this.)

There are those who say opening a book with the weather violates one of Elmore Leonard’s “rules” but the rest of that rule is often omitted. It says (bold text is mine):

“Never open a book with weather. If it’s only to create atmosphere, and not a character’s reaction to the weather, you don’t want to go on too long. The reader is apt to leaf ahead looking for people.”

For me, the weather should be woven in with the story, not become a “Stop Everything! I need to describe the weather” moment. (Something that bugs me with character descriptions as well.)

It’s a matter of Show, Don’t Tell. I write in Deep POV, and everything needs to be filtered through the characters’ senses.

I grew up in Los Angeles, where we had earthquakes every now and then, and wildfires in the canyons where we lived, but no real “weather.” Winter rains, which created the mudslides from the wildfires was pretty much the extent of things. Seasons were marked by the calendar more than the weather.

Then I moved to south Florida, where there were two seasons: Summer and February 3rd. But there was weather. Hot, humid, and lots of afternoon thunderstorms. In Miami, the difference between daytime high and nighttime low temperatures was a few degrees. Orlando, our next home, was slightly more bearable with a greater difference between day and night.

Now, I live in the mountains of Colorado, where we get four seasons, sometimes irrespective of the calendar.

Since I started this post by mentioning showing rather than telling, and what my feelings are about using weather, I should show you some examples from my own work.

From Seeing Red, my collection of short stories set in central Florida: The protagonist is James Kirkland, a homicide detective.

Nobody in central Florida survived without some kind of air-conditioning, but Red’s old place had window units that should have been replaced a decade ago. Combined with the loose panes on his jalousie windows, he might as well be living outside. Another reason I didn’t visit often. And with today’s forecast calling for the 90s in both degrees and humidity, not a place I wanted to be.

We agreed to meet back at Central Ops after lunch and spend some quality time with the murder book and white board, thereby avoiding being caught in the daily afternoon thunderstorms. I changed from my department-mandated suit into attire more appropriate for tromping through the non-air conditioned woods, although I did pack the suit into my go bag, where I always kept a change of clothes.

Another approach, and one I feel can be significant, is to show weather that goes against type. Every now and then, it gets cold in central Florida, as in freeze warnings cold. How do your characters deal with that?

Here, Detective Kirkland shows up at a murder scene and is talking to the ME, who speaks first.

“I’d say he’s been dead two, maybe three days, given the cold snap, the open window, and no heat.”

Hardly anyone in central Florida used heat. We had maybe ten days a year where the temperatures dipped below forty. Our luck to be in the midst of three of them, complete with freeze warnings.

The wind chill kicked in and I crossed my arms trying to keep warm. I wore the same slacks and sport coat I’d put on this morning when it was sunny.

Or, from Danger in Deer Ridge, a book set in the Colorado mountains

A gust of wind swirled through the lot. Scattered raindrops painted dots on the asphalt, interspersed with bouncing hail. Elizabeth wrapped her arms around herself. “What happened to the sunshine?”

Grinch gazed at the rapidly darkening skies. “I guess the front got here sooner than expected. They’re talking snow flurries, but it was supposed to hit well after midnight.”

“Welcome to the Colorado mountains.” Grinch grinned, grabbed Dylan’s hand and jogged toward his truck. “Where you can get all four seasons in a day.”

From Deadly Puzzles, a Mapleton mystery set in Colorado in February

In the few minutes they’d been talking, the storm had turned violent, the wind and snow threatening to carry them down the hillside as if they were debris in an avalanche. Gordon grabbed for Wardell’s hand. “To my car,” Gordon shouted, his words barely audible above the howling wind. Ice pellets stung as they salted his face.

His Maglite was useless. He shoved it into his parka pocket. Grabbing tree trunks for support with one hand, dragging Wardell with the other, Gordon plodded ahead, one booted foot at a time. Next tree. Hang on. Find your balance.

“Can you see the road?” he shouted, inches from Wardell’s ear.

A glimmer of blinking red broke through the white curtain. Shifting his direction, Gordon resumed the climb. Why did a quarter of a mile going down turn into two miles going up?

All of these examples show the weather playing an antagonistic role. Why not people picnicking on a sunny day? Enjoying themselves at the beach?

Nothing says you can’t do that, but as our JSB says, we don’t want to see Happy People in Happy Land. There need to be some ants at that picnic, and sand fleas on the beach.

What’s your take on weather in novels? Share examples of what works for you. Or what doesn’t, and why.