A few nights ago my daughter, Emily, sent me an email — “Dad, you gotta listen to this. It’s Sara Bareilles covering Elton John’s Goodbye Yellow Brick Road. She’s one of the only few people I’ve ever heard that can do Elton John properly.”

Note: Before you read any more of this post, click on this link and listen to this beautiful voice:  https://www.youtube.com/watch?v=Ozd2ja7mAgM&list=RDOzd2ja7mAgM&start_radio=1 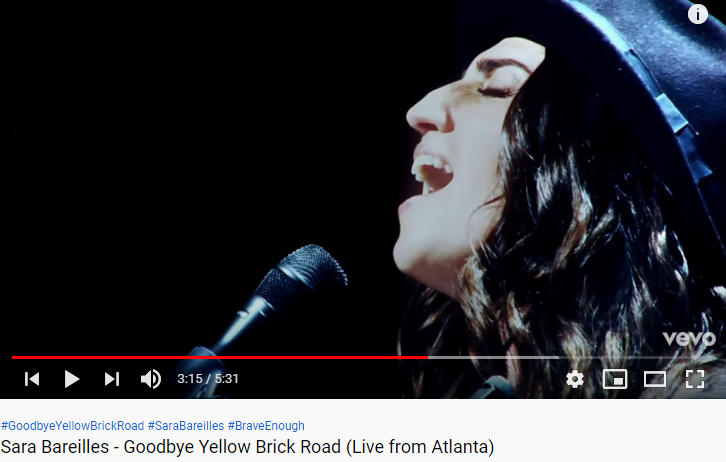 My wife, Rita, and I listened to Sara Bareilles sing Goodbye Yellow Brick Road twice and once more. Then we YouTubed a live concert version from Elton John himself. I had to agree with Emily. Sara Bareilles was just that good in her cover.

Sure enough, the chorus goes:

Rita smiled. She said, “You were an investigator. Figure it out.”

So being the detective that I was, I went toad hunting through rabbit hole research. I learned stuff. Figurative language stuff. Stuff writers should know.

Synecdoche — exemplifying parts of an object (a subset of metaphors).

Connotations — a feeling a word invokes in addition to its literal or primary meaning.

Phonology — the sounds produced by language.

Syntax — the structure of words, sentences, paragraphs, and so forth.

Ambiguity — words with two or more outward ways of meaning.

Homonymy — different words with same sound (to, too, two).

Understatement — presenting something as being smaller, worse, or less important.

Proverbs — short pithy saying in general use, stating a general truth or piece of advice.

Onomatopoeia — formation of a word from a sound associated with what is (cuckoo).

Paradox — seemingly absurd statement that turns out to be true.

Allusion — expression calling something to mind without explicitly mentioning it .

Pun — the pigs were a squeal (if you’ll forgive the pun).

I popped outa the rabbit hole, toadless, and thought this out. There has to be something simple here. Probably hiding in plain sight. I’ll take the song apart, bit by bit.

Okay, “yellow brick road” I get. It’s the fast life and Bernie wants Elton to leave it for a simpler life like going back to his “plough” at his “old man’s farm” whose earlier advice he should’ve taken. That’s pretty clear. So is “not signed up with you” and “I’m not a present for your friends to open” which are very powerful statements when you dwell on them.

“This boy’s too young to be singing the blues”? I think I understand that figurative reference. Same with “the dogs of society howl.” And “can’t plant me in your penthouse” really adds to the story – greatly helps to paint the big picture.

“Shoot down the plane”, “couple of vodka and tonics”, and “set you on your feet again” make things clearer yet as to what Bernie Taupin was saying through Elton John’s voice. ‘Get a replacement”, “plenty like me to be found”, “mongrels who ain’t got a penny sniffing for tidbits on the ground” — I get it all.

To start with, owls hoot. They don’t howl. And Bernie broke a main writing rule where he used the same two strong descriptors close together on two different subjects—dogs of society howling and the old owl in the woods howling. If I tried that, I’d get 1-Starred on Amazon. But he’s Bernie F’n Taupin so he can do whatever he wants with figurative speech. Sorta like what Stephen King gets away with.

I ran this by Rita. She said, “No. That’s silly. It makes no sense whatsoever within the context and elements of the Goodbye Yellow Brick Road story. What’s that thing you always preach from your detective days? Occam’s razor? Where the simplest answer is usually the correct answer? Go back to basics and think it through.”

Then it hit me. What if there was absolutely no meaning to a howling old owl out there in the woods bent on murdering some poor, defenseless, and aroused toad schmuck? What if Bernie Taupin simply had writer’s block and struggled with something to rhyme with “road” and the word “toad” suddenly popped into his mind? Then Bernie grabbed a random owl to go along with it, added some adjective and adverb figurative descriptors that had to work with the phonology of his lyrics and made Elton John’s voice flow?