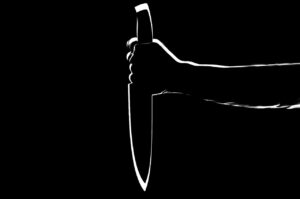 Today we welcome another brave anonymous author with a first page entitled:

The Lies of Murder

Merli Whitmore hadn’t stepped foot in her childhood home in ten years. She expected tension entering unannounced. Tension with her step-mother, not the heart-pounded tension of a bloody chef’s knife stabbed into the wood cutting board. Someone had left her a note on lined white paper dotted with drops of blood.

NO BETTER WAY TO START YOUR RETURN TO HAVEN HILL THAN FOR ME TO KILL HER FOR YOU. WELCOME HOME, MERLI.

From behind, Merli heard a familiar voice. “Hands up and turn around slowly.”

She obeyed the command, turning to face two police officers pointing guns in her direction. “Hello, Ian. Been a long time.”

“Merli?” She was the last person he imagined seeing. “What are you doing here?”

“You know her?” Officer Urbane asked.

While Officer Urbane spouted the Miranda warning and cuffed her hands behind her back, Ian read the note under the bloody knife. Merli sat on a kitchen chair.

Ian pulled out a second chair and sat three feet away. “You didn’t answer my question. What are you doing here?”

Because I always follow my premonition dreams is what she wanted to say. Only her father and Aunt Cordelia knew about her dreams. “I haven’t been able to reach my father in three days. I finally jumped on a plane to find out why.”

“What did Vivian tell you?”

“My feelings toward Vivian haven’t changed.”

“What’s that supposed to mean?” Officer Urbane took a step forward, hands placed on his hips.

“You look familiar. What’s your name?”

“She knows my brother?”

“Merli grew up in this house. Xander was in our class. Vivian’s her step-mom. Why don’t you find out what’s happening at the other scene?”

Once Officer Urbane left the house, Ian returned his focus to Merli. “When was the last time you spoke to Vivian?”

“I don’t know. Probably a couple weeks ago. She has an unpleasant habit of interjecting herself when I’m face-timing with my dad.”

“And you came home because you couldn’t reach your dad?”

“He always returns my calls within a couple hours. I even tried texts and emails and no response for three days. If you know something, tell me.”

Ian leaned forward. “Where were you between six and nine this evening?”

This submission races out of the gate. Congratulations to the Brave Author for starting with action and a major crime. Merli Whitmore enters her childhood home for the first time in years and immediately finds a blood-spattered note fastened to a wood cutting board with a bloody knife. The message is a real punch in the gut—the note writer claims to have killed an unnamed woman for Merli. That’s some homecoming!

Then two cops pull guns on her and she knows one of them.

Merli has obvious, ongoing conflict with her step-mother and there’s a strong suggestion Vivian has been murdered, making Merli a suspect. Additionally, Merli’s premonition dream hints that her father is also at risk.

This page definitely grabs the reader’s attention early and piles lots of complications on the main character. Well done!

There is also potentially interesting backstory between Merli and Ian who know each other from school days. The author gives intriguing hints without an information dump. Her old classmate orders his partner to immediately handcuff her. Whoa! The reader wonders why–she’s cooperating and is not armed or combative. The author establishes things have already gone terribly wrong for Merli and only promise to get worse. Excellent!

Several plausibility problems jump out but are easily fixable.

However, if, as part of the plot, you want to establish these officers are overly aggressive or Ian is paying back an old grudge, then it does work to slap the cuffs on her as an intimidation tactic.

Merli’s character seems cool and confident, especially with guns pointed at her. She gives short, coherent answers but also shoots questions back at the cops. The reader roots for her because she doesn’t cave in to their heavy-handed tactics.

She has premonition dreams that predict the future—her dreams can be her curse but also her power. That makes for a complex, interesting character the reader wants to learn more about. Well done.

Merli Whitmore hadn’t stepped foot in her childhood home in ten years. She expected tension entering unannounced. Tension with her step-mother, not the heart-pounded tension of a bloody chef’s knife stabbed into the wood cutting board.

She didn’t expect the sight that made her heart pound: a bloody chef’s knife stabbed into the wood cutting board.

She was the last person he imagined seeing. This is a point of view inconsistency because it briefly goes inside Ian’s head:

Maybe instead: His startled expression said she was the last person he imagined seeing.

Weak gerunds: there are three verbs that end in -ing in three lines—turning, pointing, seeing. For stronger verbs, here are a couple of suggestions:

…turning to see two police officers who pointed guns at her.

…the last person he expected to see.

“You know her?” Officer Urbane asked. How does Merli know his name? Does she see a nametag? A few paragraphs later, she asks his name even though it has been used several times.

Attributions: Even though there aren’t many attributions, the dialog generally makes it clear who is talking. However, this passage was a little confusing:

“You look familiar. What’s your name?”

“She knows my brother?”

Merli faced the cop who’d cuffed her. “You look familiar. What’s your name?”

Urbane’s face screwed into a frown. “She knows my brother?”

The author does a quick, efficient job of explaining the relationships without an info dump: “Merli grew up in this house. Xander was in our class. Vivian’s her step-mom.”

Ian leaned forward. “Where were you between six and nine this evening?”

Obviously, a crime happened between six and nine this evening. But would a responding officer ask about her whereabouts/alibi? That sounds more like an interrogation by a detective.

Also, where did the crime occur? There’s a reference to “the other scene,” perhaps where the bloody knife was used. However, if the murder weapon is found inside this house, it would also be cordoned off. Ian would not disturb a crime scene by sitting and having Merli sit. He would take her outside and call for officers to secure the scene.

If the crime happened elsewhere, what caused the police to respond to this location?

I’m raising these questions because they will occur to a reader and will need to be answered within a few pages.

There is virtually no description or scene setting in this first page. The Brave Author might consider slowing down to include a few words to establish what the kitchen looks like (aside from the chopping block and bloody knife, which are great!) as well as the physical appearance of the officers, especially Ian since he appears to be an important character.

The time is “this evening” sometime after nine p.m., meaning it’s dark outside. Maybe include that detail: She expected tension entering unannounced at ten-thirty at night.

Merli displays almost no reaction to startling events that would normally provoke strong emotional responses—a bloody knife, a note confessing to a murder, cops who pull guns on her, being cuffed. While I admire her cool confidence, maybe include more reaction from her—the shock of cold, hard metal biting her wrists, a brief worry that her premonition dream about her dad is coming true. Let the reader inside Merli’s head to bond with her as she faces these frightening circumstances.

TKZers: Would you turn the page? What suggestions or comments can you offer this Brave Author? 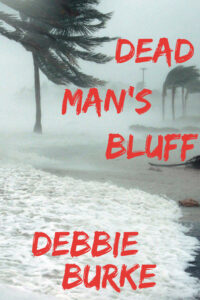 Debbie Burke’s new thriller, Dead Man’s Bluff, is now available for pre-order at this link. If you order now, the special price is $.99. Dead Man’s Bluff will be delivered to your device on June 23.

23 thoughts on “First Page Critique – The Lies of Murder”