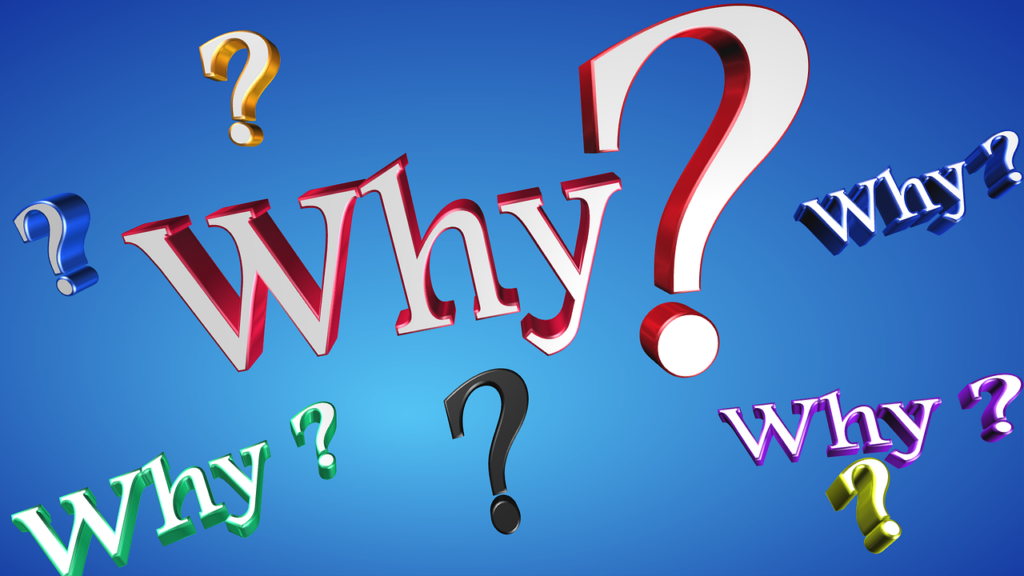 Image by Anand Kumar from Pixabay

Everyone, I’m sure, has heard of using the “What if?” question to start a story, and to help move things along throughout. But for me, there’s an even more helpful question for me while I’m writing. WHY?

Disclaimer. I’m not a Plotter. Not a true Pantser. More of a Planster.

In one of his workshops, James Scott Bell has an exercise designed to help you understand your characters. There, he sets up a scene of a gorgeous room with a huge picture window overlooking a pastoral view and your character picks up a chair and throws it, breaking the window. He asks Why he or she would do that.

While that can be helpful when it comes to characterization, my question relates to the story. Even though we write fiction, it has to come across as reality. One technique I use to make sure things seem “real” is to ask myself Why a character would do or say something.

If the answer is “Because I need it for tension/conflict/humor/plot advancement,” it’s probably wrong. When I was writing Danger in Deer Ridge, the first major ‘error’ I spotted in my opening draft was having the hero appear while the heroine was looking in her car’s trunk for her tool kit.

All these Why questions require answers. Answering them drives the story forward for me. My thought processes might not end up on the page, (and this is most prevalent in the early chapters, while things are taking shape) but the results do.

So, where it ended up: She didn’t hear him drive up because he parked at the top of the drive. Why?

He parked the car there because his son is asleep in the truck. It’s a quiet rural area, one he knows well, and he’s not concerned that someone will come by and Do a Bad Thing.

That’s still weak, so I added a dog who would take the head off of anyone who tried anything. (Note to self: don’t forget you’ve now saddled yourself with yet another ‘character’ to keep track of.)

Why not go all the way down the drive? It’s steep, curves, and riddled with potholes, and he doesn’t want to wake the kid.

Weak. What if he’s not an experienced father? Why not? Because his wife left him, took the kid and remarried, and he hasn’t seen the kid since he was an infant.

Why does he have the kid now? Because the ex-wife and the boy’s stepfather were killed in a Tragic Accident? Works for now. (Note to self: revisit this before Grinch has to tell anyone about it.) Also, having him a new and inexperienced father allows for more conflict between hero and the Very Caring Mother who is our heroine.

More notes: Why doesn’t the hero work for Blackthorne, Inc. when the book opens, since the other books in the series open with a scene of a Blackthorne op. Why does he live conveniently near the heroine’s new digs?

By the time I’d written the scene, answers to my Why questions gave me more insight into my characters. I realized that the hero’s friendly demeanor and magnetic grin weren’t consistent with a man who’s worried about leaving a young child asleep in his truck. I ended up tweaking that scene, which added to the tension, because the heroine sees someone who’s in a rush, who keeps looking over his shoulder. She extrapolates from her own secret-keeping life, and it seems logical for her to worry that this guy might be out to get her.

If you don’t want your story to seem contrived, try asking yourself “Why?”

What other questions help you move forward in your writing?

22 thoughts on “Ask Yourself Why”