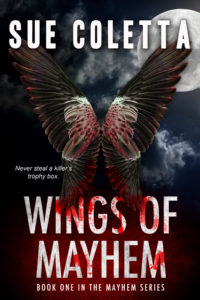 I’m proud to have longstanding TKZ member, Sue Coletta as my guest today. This is her first time here as a featured author. Not only is she usually one of the first to comment on each post, but I’ve seen her grow as a writer. I enjoyed her first book MARRED, with its strong voice and dark eerie tone, and I’m currently reading WINGS OF MAYHEM and thoroughly enjoying the voice of her protagonist, Shawnee Daniels. Take it away, Sue, and welcome!

When we first begin our writing journey voice is one of things that’s nearly impossible to define, never mind discover. For years I kept hoping to find my writer’s voice, but I had no idea where to look. Deep within myself? Through hours and hours of practice would it suddenly appear? What was this mysterious “voice” everyone spoke about? And why didn’t I have one?

Perhaps what agents and editors were referring to was that perfect blend of style, rhythm, and cadence that make up the mysterious writer’s voice. Maybe it’s like trying to define the difference between graffiti and street art. I may not be able to put it into words, but I’ll know it when I see it.

When I look back on those days I wish someone would’ve told me, with a clear definition, how to develop my voice. And then one day something magical happened. I was reading the most amazing craft book I’d ever encountered, the book that transformed my writing life in an instant. I’m referring to Story Engineering by TKZ’s own Larry Brooks.

When I learned about the three dimensions of character I found my writer’s voice. I couldn’t believe it. Why didn’t anyone tell me this before?

Today, I would describe voice as the combination of syntax, diction, punctuation, dialogue, sentence rhythm, and character development within one story or across many novels. It’s unique to you. Just as a flute doesn’t sound like a clarinet, neither does one writer from another.

How awesome is that?

We all use the same 26 letters, and yet, no two authors will write the same scene the same way. One writer might use run-on sentences that go on for miles. Whereas another loads the story with short, punchy fragments. Neither is wrong; it’s a matter of personal style.

But style isn’t the only thing that makes up the writer’s voice.

By knowing our characters intimately, by understanding their hopes, their dreams, their backgrounds, scars, flaws, nervous ticks, religious beliefs, world views, what they fear, what they strive for, what they want more than anything else…we can slip into their skin and write using their voice. Not only in dialogue, but in the narrative as well—also known as narrative voice.

Take, for instance, my protagonist in Wings of Mayhem. Shawnee Daniels is a wise-cracking, snarky chic who was raised on the city streets. The way she views the world is much different than her librarian best friend, Nadine. Shawnee is overly cautious. She swears, has huge trust issues, and in a lot of ways, she’s her own worst enemy. Where Shawnee might see danger, Nadine, who was raised in a loving and often sheltered environment, would see an opportunity. Nadine never swears. Instead, she uses words like “ship” and “fleakin’”. She’s a glass-half-full type of girl. Shawnee’s glass barely has a drop in it.

Nadine’s dialogue is filled with words like “Woot!” She waves jazz hands and bounces on her toes when she’s excited. Shawnee is her polar opposite. She would never be caught dead waving a jazz hand in the air and she certainly would never use the word “Woot.” Because she’d never do these things in the dialogue, I can’t let her do it in the narrative, either, or the story would lose its narrative voice.

In Wings of Mayhem I alternated chapters between Shawnee, Detective Levaughn Samuels, and Jack Delsin, my antagonist. Each have their own way of viewing the world around them and, more importantly, the situation they’re in. I couldn’t write the narrative in the same way or it wouldn’t be unique to each character.

Where Shawnee believes everyone is after her, Detective Levaughn Samuels is more level-headed. In his narrative I used contractions like I did with Shawnee, but the tone is different. He views the world with a calm, rational, detective’s perspective. When he looks at a crime scene his stomach doesn’t scream in protest. But Shawnee’s does.

While examining a murder victim, Levaughn would narrate the facts, the wounds/injuries, his theory of the case, etc. Shawnee would be too distracted by the blowflies. She might gape at the victim’s smeared mascara, or narrow in on the thick, bluish film veiling the victim’s eyes. But Levaughn wouldn’t mention that because all corpses develop corneal clouding. It’s a natural occurrence that develops 2-3 days after death, depending on the environment in which the body is found.

By remaining true to our characters in dialogue as well as narrative we breathe life into the story. Thus, filling it with voice.

For Discussion:
Over to you, TKZers. What tips have helped you develop your writer’s voice? 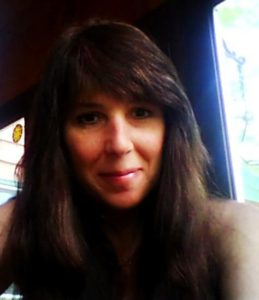 BIO – Member of Mystery Writers of America, Sisters in Crime, and International Thriller Writers, Sue Coletta is always searching for new ways to commit murder…on the page. She’s the author of Wings of Mayhem, Marred, Crime Writer’s Research, and 60 Ways to Murder Your Characters. She’s published in OOTG Flash Fiction Offensive, Murder, USA anthology, InSinC Quarterly, and in the upcoming dark fiction anthology, RUN. The founder of #ACrimeChat, which takes place every Wed. on Twitter, Sue also runs a popular crime resource blog, where she shares her love of research…forensics, police procedures, serial killers, and true crime stories. You can learn more about Sue and her books at: www.suecoletta.com