Happy 2017! I spent the holidays reading almost nothing, writing a lot, and engaging for better or worse in self-reflection.  I concluded that the best thing I could do for myself and for my work was to go back to basics.

What follows is aimed more at those folks in our audience who are struggling with getting that first novel done. It is easy enough to explain in the context of childhood: rather than struggling to build a motorized crane using an Eitech Erector Set, I need to grab a box of Legos and start building little cars and and people and such, working my way forward by starting with the small and simple and building gradually, but steadily.

I came to this conclusion after watching two television series. You’ve almost certainly heard of one, and probably have never heard of the other. Our own Kathryn Lilley discussed Westworld on this blog a few weeks back. It was beautifully filmed, intricately plotted, startling, and full of surprises. The major rub against it was that it was difficult to understand what was going on from episode to episode. I still have a little callus on my thumb from rewinding it to pick up certain plot nuances that I missed. There were several — maybe a dozen — plot lines that spun off in different directions, some of which were relevant to the story, others which seemed to have been included simply to create a mood. All of them were interesting, but only a few minutes were devoted to each at any one time. Characters? More characters had been introduced by Episode Three than I could keep track of. I found it to be worth working through it — it raises some stunning and yes, frightening issues concerning reality, mortality, and other areas — but the general consensus seems to be that it arguably is a series that more people heard about than actually watched.

The anti-Westworld, if you will, is a series available on Netflix called Kacak (“The Fugitive”). If Westworld  is the result of the Eitech erector set I referenced at the beginning of this post, Kacak comes from the basic box of Legos, and it is wonderful. Kacak is a genre-blurring television series produced in Turkey, throwing together elements of thriller, suspense, romance, drama, and yes, a bit of comedy to create a slow-boil story that sucks you in and doesn’t let you go. It is subtitled, but the story is simple enough, and the acting is good enough, that one could glean the context without it. It begins in a remote Turkish village where a man named Serhat operates a tea shop. He is loved by everyone around him, and one gets the sense of “why” from his interaction with his clientele and another shopkeeper. For his own part, Serhat is devoted to his wife and their young son, who somehow in a few moments becomes the cutest little guy to ever walk the face of the earth. All of this communicated with a few minutes of interaction here and there over the course of a day or so. Just when you think you’ve stumbled into an episode of Lassie, however, Serhat interjects himself quite forcefully into a dangerous situation. He is immediately hailed as a hero throughout his village; when news of Serhat’s heroism spreads to Istanbul, however, a danger from his past — a past of which even his beloved wife knows nothing — quickly intrudes and irrevocably blows up Serhat’s perfect life. Does this sound familiar? Sure. The movie A History of Violence explores a similar theme, as does Charles Dickens’ A Tale of Two Cities. Kacak goes further, however. Serhat vows revenge. As Serhat carries out his plan — and attempts to put what is left of life back together — the audience learns about his past, in dribs and drabs, not in meal courses but in tapas or dim sum, small portions which are easily digestible and brought out over the course of the very long meal, where the surprises keep coming. To put it another way: just when you think you’ve reached the smallest Russian nesting doll, there’s another one within.

Kacak does all of this without a big budget, or, interestingly enough, without nudity, graphic sex, or (much) gratuitous violence. Some of the acting is a bit stilted, and there are momentary but noticeable lapses of continuity, to the extent that on occasion the series is unintentionally funny. That is part of the charm of it, however. It isn’t subtle or nuanced for the most part. What it does, however, and does very well, is tell a story.

I will be the first to acknowledge that I am not much of a teacher. If I have a strength in the area of education it’s the ability to point people to something that will illustrate, quickly, how something is done. If you are having trouble getting your story off of the ground, or that you are getting bogged down under the weight of your own plot, or are having trouble keeping your characters straight, hijack the family Netflix account from your teenager and watch at least the first few episodes of Kacak. I have watched the first ten — Netflix lists fifty — but you can learn a lot just by watching and studying the first three or four. I think, however, that you will want to eventually watch the whole series, which takes that little box of Legos and slowly builds from it, using just a few parts at a time.

My question for you: is there a television series you use to jumpstart your writing, to clear the cobwebs, whatever? My own answer: in addition to Kacak…True Detective: Season One, which I have practically committed to memory (time, indeed, is a flat circle). You? 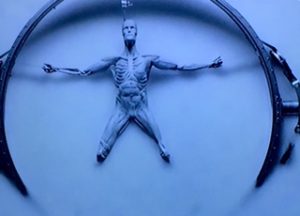 I don’t watch many television shows, so I was surprised that I recently become addicted to a new HBO series: “Westworld”.

When I first heard that HBO was making a series based on the original concept of the Westworld film (the earlier version was written by sci-fi writer Michael Crichton), I’ll admit that I was skeptical. The original Westworld was one of the worst movies of all time, surpassed in its hideousness (despite a bravura performance by actor Yul Brynner) only by its lamentable sequel, “Futureworld”.

The premise is simple: “Westworld” is a recreation of a 19th century western town, staffed by android “hosts”, where vacationers can act out their fantasies about living in the old West. The paying guests of Westworld are told that they can live out their Wild West fantasies in complete safety. “Nothing can go wrong,” the tourists are told. Which means, of course, that everything certainly will go wrong, and fast.

Fortunately for viewers, the new HBO series far surpasses the original film. It explores issues such as the nature of consciousness, the relationship between humans and robots, and the stories we invent about our lives.

Here is the trailer for the original 1973 movie:

And here is the trailer for the 2016 HBO series.

Same premise, much more effective execution. The HBO version of Westworld is a great show for writers to watch, in particular. At its heart, Westworld is a show about storytelling. Each episode explores an aspect of telling stories, positing the notion that our memories are nothing more than the narratives we select to anchor our identities as human beings. My favorite character in the show is the writer, Lee Sizemore, a profane, alcoholic hack who is charged with writing the “depraved little fantasies” that entertain the tourists at Westworld. Sizemore’s hapless, comedic character offers a refreshing contrast to the polished perfection of the androids and robotic-seeming humans of Westworld.

Have you been watching the Westworld series on HBO? Here is a New York Times article recapping this week’s penultimate show, Episode 9. But if you haven’t been watching the series, I wouldn’t jump into one of the later episodes. Multiple timelines and unreliable narrators abound in this ambitious show, so it’s essential to watch it from the beginning. Next Sunday is the finale, and fans of Westworld are eager to know: is Arnold really dead?

Fun aspect of the new Westworld: the integration of contemporary rock music as the musical score. Here’s a clip as an example (strong language, violence advisory).