There’s a saying that goes, “Where you’ll be five years from now depends on the people you meet, the conversations you have, and the books you read”. I don’t know who said it, but I say it holds truth. Especially books you read… like the ones on your nightstand.

My dad got lost for hours reading everything from newspapers to classics. My sister, who’s a lioness of a reader, said if my dad were alive when the internet arrived, we’d never have gotten him off it. My mum held a Masters in English Lit, and she wrote her thesis on Thomas Hardy. To no surprise, mum was a teacher who loved to teach kids to love to read. 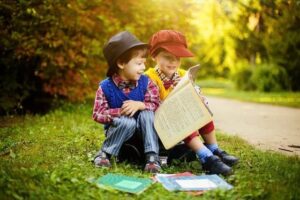 Our kids were very young when they were born, so it was easy for my wife and I to mould them into our reading cult. I turned Aesop’s Fables into “stupid stories” to get bedtime bladder-relieving belly laughs from Emily and Alan. Rita, my wife, sensibly read Harry Potter to them so convincingly that they hated the movies because they didn’t sound like their mom’s character versions.

Now our kids are all growed up. Thankfully, they turned out all right because they’d rather read than work, and that’s proven because both took leave from their jobs and went back to university. At least this time, mom and dad aren’t paying. 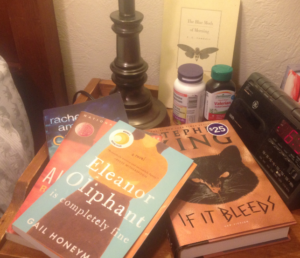 Now mom and dad are empty nesters who love nothing better than hang around and read. Rita and I read a lot. We have so many books that our insurance provider required a structural engineer to approve our book cases for fear of someone being killed in a catastrophic collapse.

Seriously, though, we have serious stuff on our nightstands. But as close as Rita and I have been during our 37 married years, we have significantly different reading interests. Same with our kids—Emily, 32 and Alan, 30—and that’s a good thing because we all keep on reading.

My wife and kids stepped up for this Kill Zone piece. I polled them on their nightstands. I asked them to list five books they recently read, were currently reading, or had purchased and intended to read next (the TBR list). Here’s five reads on each of the Rodgers family nightstands.

That’s the Rodgers reads. What about you Kill Zoners? Let’s read what TKZ contributors and followers have on the nightstands. Go ahead and list five books you’ve recently read, are now reading, or have on the TBR list. That includes paper, digital, or however you like to read. 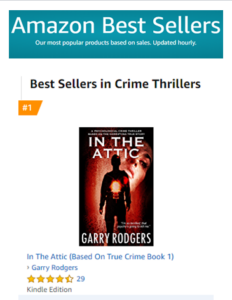 Garry Rodgers is a retired murder cop with a second career as a guy no one wanted an appointment with — Dr. Death, the coroner. Now Garry passes himself off as an indie crime writer who checks his Amazon sales stats every half hour.

Speaking of crime writing, Garry Rodgers has six books out in a twelve part Based-On-True-Crime series. Garry’s first one, In The Attic, is available for FREE on Amazon, Kobo, and Nook. Help yourself to one for the holidays!